Shields-Marshall & Mayer-Baumgardner Rivalries Come to a Head This Saturday – Historic doubleheader goes down Saturday from London’s O2 Arena and streaming  LIVE AND EXCLUSIVELY in the U.S. at 2:30 pm ET / 11:30am PT on ESPN+

There’s unfinished business in the world of women’s boxing, and it will finally be settled in a historic doubleheader this Saturday at The O2 Arena. 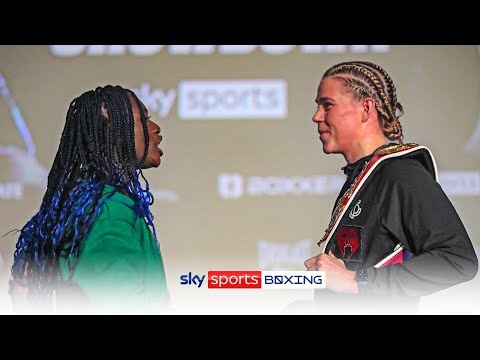 This is what the fighters had to say at Thursday’s press conference.

“Of course, we’ve got to talk about her punching power. She’s going to try to come out there and land a big shot. She may want to fight on the inside or on the outside. But she just wants to be able to touch me and land. That’s really all I see. But it’s a boxing match. I may get hit in there, but if she thinks she won’t get hit, then she’s mistaken. If she thinks she is a better boxer than me, she’s mistaken. But we’re going to let her think whatever she wants to think and do whatever she wants to do because I’m going to adapt and do whatever I have to do to win and make the fight easy.” 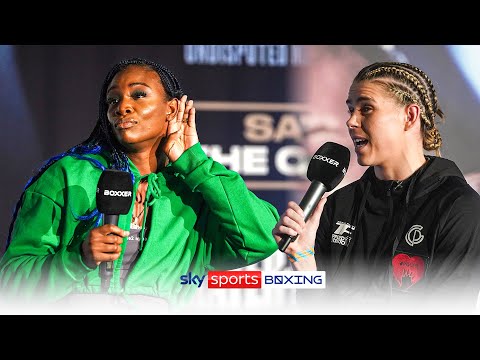 “I think she will come up short. I believe I’m a better boxer than Claressa. I believe I have always been. I cannot wait. Saturday couldn’t come quick enough. We had a 12-week camp and a five-week pushback. I’m just itching to get in there now.”

“There’s nothing left to say. I can’t wait for Saturday. Let’s get it on.”

“This is huge for me. I’ve said that I wanted to become undisputed. There’s a reason why I’ve called out Alycia and why I’ve called out all the champions. I think that I have been pushing for the biggest fights possible. But honestly, I don’t think you could have put a card like this five years ago. It’s really shown how far women’s boxing has come.” 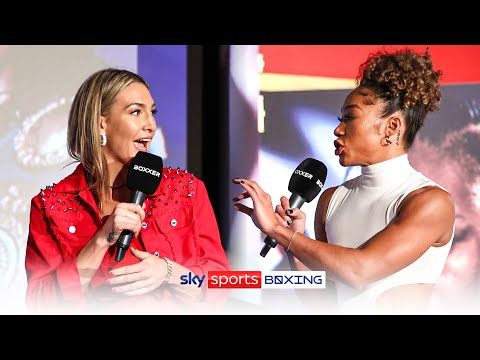 “Everything has been very strategic. That’s how I’ve been trained by Coach Al. We go in there with a cool head and execute what we’ve been working on in the gym. He hates all this. He’s sitting here shaking his head at this whole thing. He wants to get to the gym. We have to go to the gym after this, and that’s what he’s focused on. My team keeps me cool. The keep me calm and focused on the goal.”

“I’m expecting to deliver the performance of my life. Contrary to what she’s saying, I am constantly getting better. I still don’t even feel like I’ve hit my peak. I want to put it all together in this fight. I want to embarrass her. I want to make her sound stupid because she said a lot leading up to this fight.” 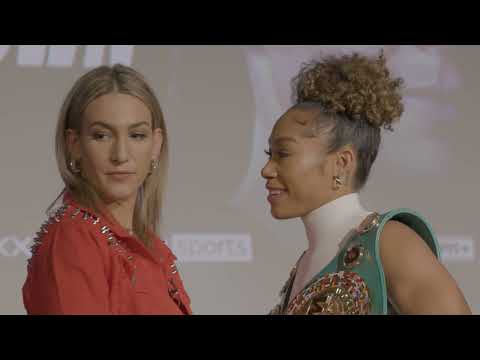 “My confidence is triggered by her. As I mentioned before, everyone who has fought her has come to fight her and go back home. She has a fighter in front of her who is willing to fight her, who is telling her what it is, that I will beat her, that I will break her jaw. Whatever it is, I am in her face. She does not like it. So, this is confidence that we are dealing with. It’s not really an anger standpoint. I’m a competitor at heart. I’ve been doing this since I was an eight-year-old girl. I’m excited to be at this stage and to be in a unification fight this Saturday night.”

“There’s no respect. At the end of the day, this is the fight game. This girl is trying to beat me. I’m trying to beat here. I have great sportsmanship, but I don’t respect her. She talks too much. And when somebody talks too much, you’ve got to shut them up, and that’s what I’m going to do on Saturday night.”

“The 2012 Olympics in London did something for women’s boxing here. It was amazing. It rose way above the rest of the world. To come back here and extend that, and then bring the U.S. stars here—that’s going to elevate the whole sport globally.”

“They’re both pros, and they want to get Saturday night on. They wanted to fight. And I think they are able to communicate really well that there’s bitterness. And it’s real. And that’s what this sport is. It’s real.” 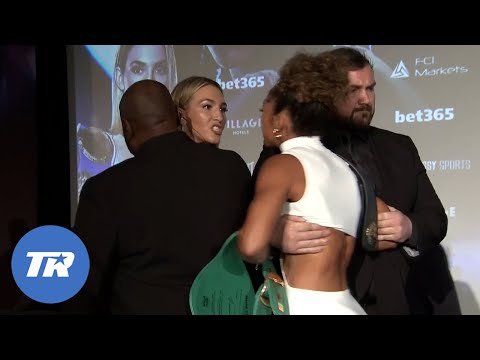 “It’s every fighter’s dream to be headlining with world titles on the line. It’s the pinnacle of our sport. And this fight with Claressa feels like this was always meant to be. So I’m excited and can’t wait to step through those ropes on Saturday night

“In recent years we’ve seen huge strides in women’s sport – especially in those sports that normally are dominated by men. And in the same year the Lionesses win the Euros, I’m happy to be part of this historic night for women’s boxing.

“But the great thing about this event is that it isn’t special just because it’s an all-female show. This is a great boxing card full stop. Even the supporting fight between Mikaela and Alycia is a headline act in itself. People are taking notice of this because the quality speaks for itself. This isn’t a gimmick. The fighters on this card are here purely on merit.

“I do see it growing in popularity, yes. Think about how far women’s boxing has come along in the short period it’s been given support? With continued backing you can only imagine what it’ll reach in 10 years time. A quick look at MMA will show you how far women can go in the sport and demand respect alongside their male peers. I don’t see any reason why the same can’t be done in boxing.

“It feels great to top this historic card and I think I’ve earned that right. I think if I wasn’t as great as I am, the opportunity would not have presented itself for me – or for her. 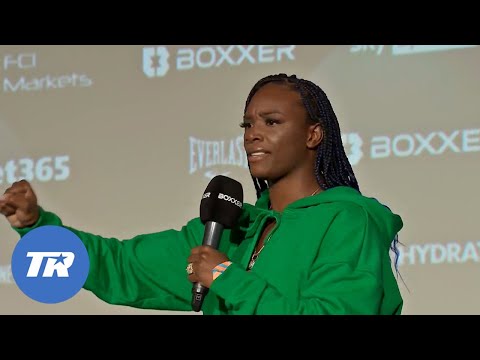 “Even though she’s the home fighter and everyone here is talking about her, I am the one with all the accomplishments. I’ve won twelve world titles, she’s won one. I won two Olympic gold medals, she’s won none.

“It’s a huge night for women’s boxing and I think if we stay on the road we are on now, it will reach equality with men’s boxing in my lifetime.

“Saturday night I will come out victorious like I always do, I hope the fans have a great time and I hope every fight on the card is great. I hope we make the national news all over the world, whether the fight ends in the first round or the final round.”

On starting boxing, aged 12: “I was very sporty growing up. I played football, netball… but [aged 12] I walked into a boxing gym because one of my friends had a little plastic trophy, which I saw glisten in the sun. And I thought, I want one of them. Curiosity took a hold of me. I was more curious than anything. I remember walking up the steps in the gym, hearing music blasting and bags being punched. I was stood at the door looking through the glass, thinking I want to go in. Looking back now, and considering our painfully shy I was at that age, I can’t believe I done that.”

On Claressa Shields proclaiming to be the G.W.O.A.T (Greatest Woman of All-Time): “Claressa’s quite comical. There’s nothing she can do or say that will effect me.”

On discovering her renowned hard-hitting punching power: “I remember when I was younger, one month my mum got a discount on some steaks. And that was all we ate: steak and chips, steak pie, steak stew, steak and dumplings… you name it, we had it. So that must be why.”

On breaking away from being ‘shy’: “Everyone’s talking about the evolution of Savannah Marshall. I’ve gone from being a relative mute to being the not-so ‘Silent Assassin’.”

On working with Peter Fury: “I always knew I could dig. But when I got to train with Peter, he showed me how to punch properly.” 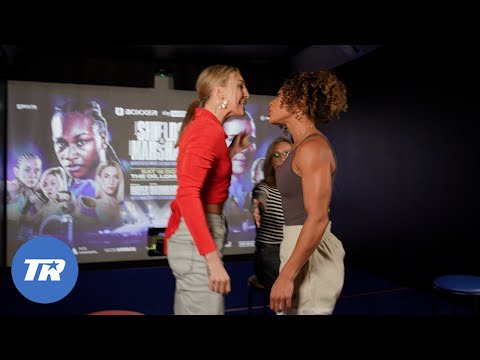 On her harrowing upbringing – and what has driven her to success in Boxing: “I didn’t talk a lot growing up. I didn’t talk until I was 5. And then, at the age of 11, I started boxing. I look at where I come from, and I come from the bottom – and I don’t think what people realise what the bottom is. I won the Olympics. But before I left home, I didn’t even have a bed to sleep in.”

“I went through some things growing up. I got sexually abused when I was 5. That made me really angry and confused towards people. I didn’t have a bed until after the Olympics – and that was at 17. From 14-17, and even before then, I was sleeping on floors. People wonder why I’m so hungry, it’s because it’s what I have to do for myself. If I didn’t, me and my family would have been poor forever. With the skills I have, I was never going to settle for that. I knew I was going to do something with them. I had to win the Olympics. I had to win world championships. I don’t hate these girls, but they have to understand how much I have to win. They just don’t get it.”

“Look at the difference now in Savannah in her professional days. She’s gone from being in the middle of cards to headlining events and selling out arenas, including her home city of Newcastle, which she could have only dreamt. I think this is the biggest women’s fight of all-time. But this is definitely the biggest rivalry in women’s boxing history.”

“When I first met Savannah it was in 2010 when she was boxing for England and we saw her in Sheffield. It was myself, Johnny Nelson and Adam Smith. We all went up there to see Savannah because she was a girl with unbelievable talent – but she didn’t believe in herself. Confidence was a massive issue. If you don’t believe in yourself in boxing, you’re in trouble. You need that self-belief. But she has discovered it – and she did that by teaming up with Peter Fury. It’s an incredible journey from where she has come from to where she is now. She is arguably the best female fighter in the world – and we’re going to find that out.”

“She’s the perfect student. She’s strictly business. Be diets, training regimes… whatever you throw at her, she does. You couldn’t ask for a better person to be with and to train with. She’s a no-nonsense type of person.” 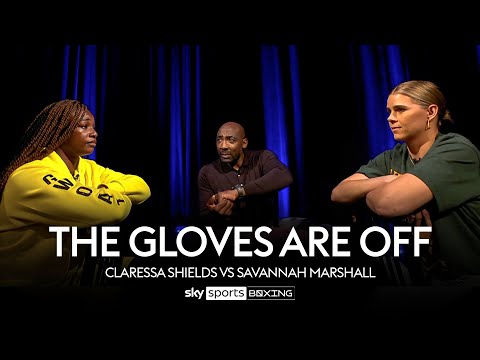