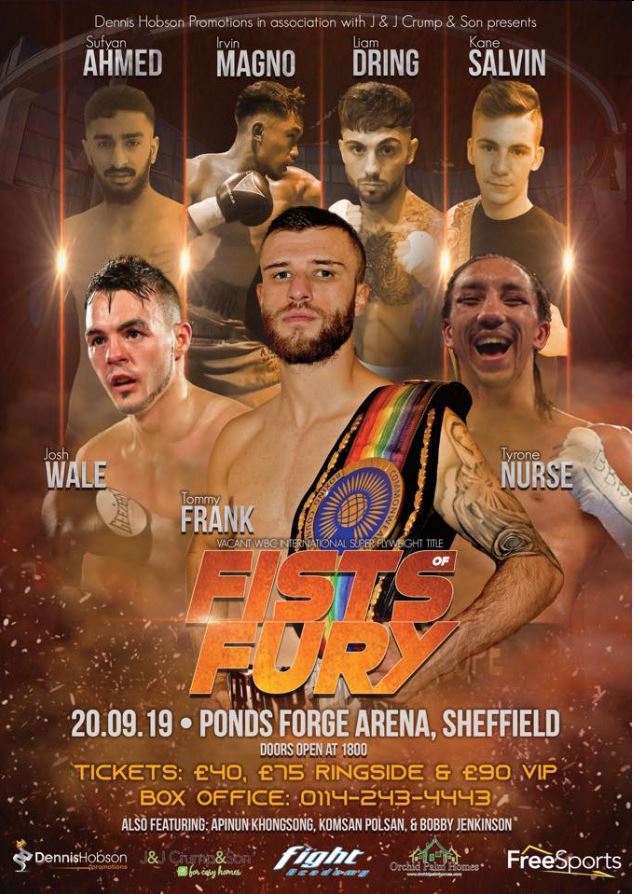 TOMMY MOVES DOWN IN WEIGHT FOR IBO TITLE SHOT

Currently a two-belt champion at super flyweight, Sheffield’s Tommy Frank will move down to flyweight for his next fight in an attempt to win the International Boxing Organisation (IBO) Inter-Continental Title against Mexico’s Martin Tecuapetla.

The 26-year-old picked up the WBC belt in his last fight, in September, against Thailand’s Aran Dipaen. In an entertaining and torrid 12-rounder, Frank showed his character to come out on top after a split-decision verdict, moving his record onto 12-0 (3).

The huge Sheffield United fan will get another tough test this time around against the experienced Tecuapetla, 15-11-4 (10). The Mexico City native has knocked out 10 opponents, only been stopped twice in 11 career defeats, and fought for the IBF World Light Flyweight belt in 2016, losing a split decision verdict in Japan. The 29-year-old also went the distance with former world flyweight champion, Cristofer Rosales, as recently as 2017.

Looking forward to the challenge, Tommy says the move down in weight will suit him, and is leaving his options open for the future.

Co-headlining alongside Tommy, will be Barnsley’s Josh Wale, 29-11-2 (14). The former British Bantamweight champion, and European Title challenger, is now campaigning at 9st and will face Ghana’s Felix Williams for the IBO International Featherweight crown. All-action Wale could have his hands full with Williams. From the city of Accra, the African has lost just once in 28 fights, and KO’d 20 of his opponents.

“For my last fight, I worked with a nutritionist for the first ever time, Lee Rickards, the Sheffield United first team nutritionist,” explained Tommy, “and the difference was absolutely unbelievable. I made weight better than I ever did before.

“My last fight wasn’t my best performance at all though, I did have a bit of an off-night, but ultimately my fitness got me through. If I hadn’t done the weight as well, then it would probably have caught up with me towards the end of that fight. I knew I had to grit my teeth and have a strong finish in the fight, and that’s exactly what I did.

“I asked Lee, if the right opportunity came along, whether he could help me make flyweight, and he said he could. Then Dennis Hobson and Steve Crump got me this title shot down at the lower weight, so I’m taking it.

“For the future, I could fight at either weight. I’ve competed at super flyweight my whole career, and won three titles, but think I’ll be even stronger at flyweight. I hit hard at super flyweight, so will pack even more of a punch at this new weight. The plan will be to see what opportunities present themselves in the future, and then get the biggest fights.”

Sheffield’s Tommy Frank says he wants to fight for the British Title in the future, but is happy to be contesting the vacant World Boxing Council International Silver Super Flyweight Title in his next fight.

Frank takes on Thailand’s Aran Dipaen at Sheffield’s Ponds Forge Arena on September 20, live on Freesports, in what should be an intriguing test. The Thai fighter has only been a pro for less than a year, but has already amassed six wins from seven outings, with five KOs. Tellingly, the 28-year-old also has a win in Japan, suggesting a trip to UK shores won’t faze him.

Tommy, 24, is one of the UK’s best young prospects. The huge Sheffield United fan is already the Commonwealth Super Flyweight Champion, after blitzing Belfast’s Luke Wilton inside four rounds in March, and will be hoping to make it to a dozen wins in a row with victory against Dipaen.

Co-headlining on the card will also be Barnsley’s Josh Wale. The former British Bantamweight Champion, and European Title challenger, is now operating at featherweight, where he hopes to add more belts to his career collection.

“I’m really excited to be fighting for this belt,” explained Frank. “I’m fully aware it’s a rankings title, to get me up there in the WBC ratings. But it’s all about laying the foundations for where we want to be, which is becoming a world champion.

“After I won the Commonwealth, the British Boxing Board put out purse bids for me and Sunny Edwards to fight for the British Title. Personally, it’s a fight I was chomping at the bit for, because boxing for the British Title is something I’ve dreamt of as a kid. But Glyn [Rhodes] and Dennis [Hobson] think the fight would make more sense being built up further down the line.

“I’m a fighter who will fight anyone, will never shy away from a challenge, and I hope that fight happens one day. The British Title is definitely one I want to box for at some point, but I’ve put my trust in Glyn and Dennis since turning pro and go with their judgement. I’m really happy with how everything is going.

“It’s hard because, as a man, when you get challenged you want to accept it, but I’m not the sort of person that goes around calling guys out. I stick to what I do best, training hard, and boxing and beating whoever my team put in front of me.”

Tommy Frank: ‘I Represent This City’

Tommy Frank faces an unknown quantity when he headlines at Sheffield’s Ponds Forge Arena on September 20, but the local fighter is excited by the challenge.

Tommy’s Thai opponent only turned pro this year but has already raced to six wins, with just one defeat, and five of his victories have come via knockout. Significantly, the 28-year-old also has a win in Japan, suggesting that travelling to the UK to take on Frank won’t be a problem for him.

Currently undefeated in 11 outings, Tommy, 26, has stopped three of his last four opponents, and the ‘Steel City’ man, and huge Sheffield United supporter, is promising another exciting performance to send his fans home happy.

Co-headlining on the card will also be Barnsley’s Josh Wale. The former British Bantamweight Champion, and European Title challenger, is now operating at featherweight, where he hopes to add more belts to his career collection.

“Firstly, a big thanks to Glyn Rhodes, Dennis Hobson and Steve Crump for pulling this show and title fight together,” said Frank. “It’s another belt, we’re laying the foundations and are heading in the right direction.

“It’s not just the belt that’s exciting me, it’s the opponent as well. No one knows much about him, but we’ve had a little look and he looks pretty decent. He’s only had seven pro fights, but I’m sure he’ll have had lots of Thai boxing fights, and he can punch a bit. So, I’m really looking forward to it.

“Talking about fans, the support as always has been brilliant. I love Sheffield, and boxing here, and I represent the city. Boxing is an entertainment business, and in my last few fights I’ve shown I’m not a one-trick pony. Earlier in my career I proved I could outbox opponents, but I’ve started putting my shots together now and have a fan friendly style. I’ll put on another good performance for the fans; one that they’ll enjoy.”

The ‘Steel City’ fighter will take on Thailand’s Aran Dipaen, who will arrive as an unknown quantity and could prove a ‘banana skin’ encounter for the likeable 26-year-old. Dipean, 28, only turned pro this year but has quickly racked up a 6-1 ledger, with five of his six wins coming by KO, and already has an ‘away from home’ victory, after winning in Japan in June.

Undefeated Tommy, 11-0 (3), is currently the Commonwealth champion, blitzing Belfast’s Luke Wilton in four rounds in March to win the title, and was last out in July, beating Tanzania’s John Chuwa inside seven. The huge Sheffield United fan will be hoping to add another belt to his collection, and could have the extra incentive of some Blades players ringside for the occasion.

Also topping the bill in a co-feature, will be Barnsley’s Josh Wale, 28-11-2 (14). The former British Bantamweight Champion is now operating at featherweight and still in the chase for titles to cap off an already successful career. Josh was also a winner in July, beating Tanzanian fighter Ekow Wilson in a Commonwealth Title eliminator.

“There’s some tough kids come out of Thailand, and he’s a bit of an unknown quantity,” said promoter Dennis Hobson about Frank’s opponent. “We don’t know a lot about him, but he’s coming to win because it’s a potentially life-changing opportunity for him. So, Tommy needs to be on top of his game. It’s a new title opportunity, and we’re looking to build up his experience by fighting another foreigner with a different style.

“It’s a potential banana skin fight for Tommy but I believe he has the ability to cope with all sorts of styles. If this opponent is heavy-handed, which it seems he is, then Tommy will cope with it. At this weight division there aren’t that many kids about but we’re plotting Tommy’s path and hopefully he goes onto the world scene, but this is the type of fight that will help tell us more.

“If Tommy does win this title, then he gets ranked higher by the WBC. We’ll see what sort of statement he makes and how that impacts on his ratings with the organisation. We’ll then take it from there, but at some stage I’d like to have a look at Kal Yafai, if Tommy fulfils his potential, like I think he will.

“Tommy’s a true professional and he’s getting Sheffield United behind him now. I’ve spoken to [manager] Chris Wilder and he wants to bring a few players to the next show, and he wants the fans to get behind Tommy because he’s a genuine Blades fan. And United’s success is coinciding with Tommy’s success.

“We don’t have an opponent yet for Josh, we’re still working on it, but he should be fighting a 10-rounder. Josh is a quality fighter and could top any bill because of his experience and style of fighting. I love watching him and he’s never in a dull fight. I’m looking forward to getting him a big fight. He was in a final eliminator for the Commonwealth Title in his last fight, so that could be on the cards in the next one. Hopefully well get him topping the bill in Barnsley soon, and winning another title, because I still think there’s a lot of mileage in him.”

Dennis Hobson Promotions, in association with JJ Crump, present an evening of boxing at Sheffield’s Ponds Forge Arena on September 20. Topping the bill will be Sheffield’s Tommy Frank and Barnsley’s Josh Wale.