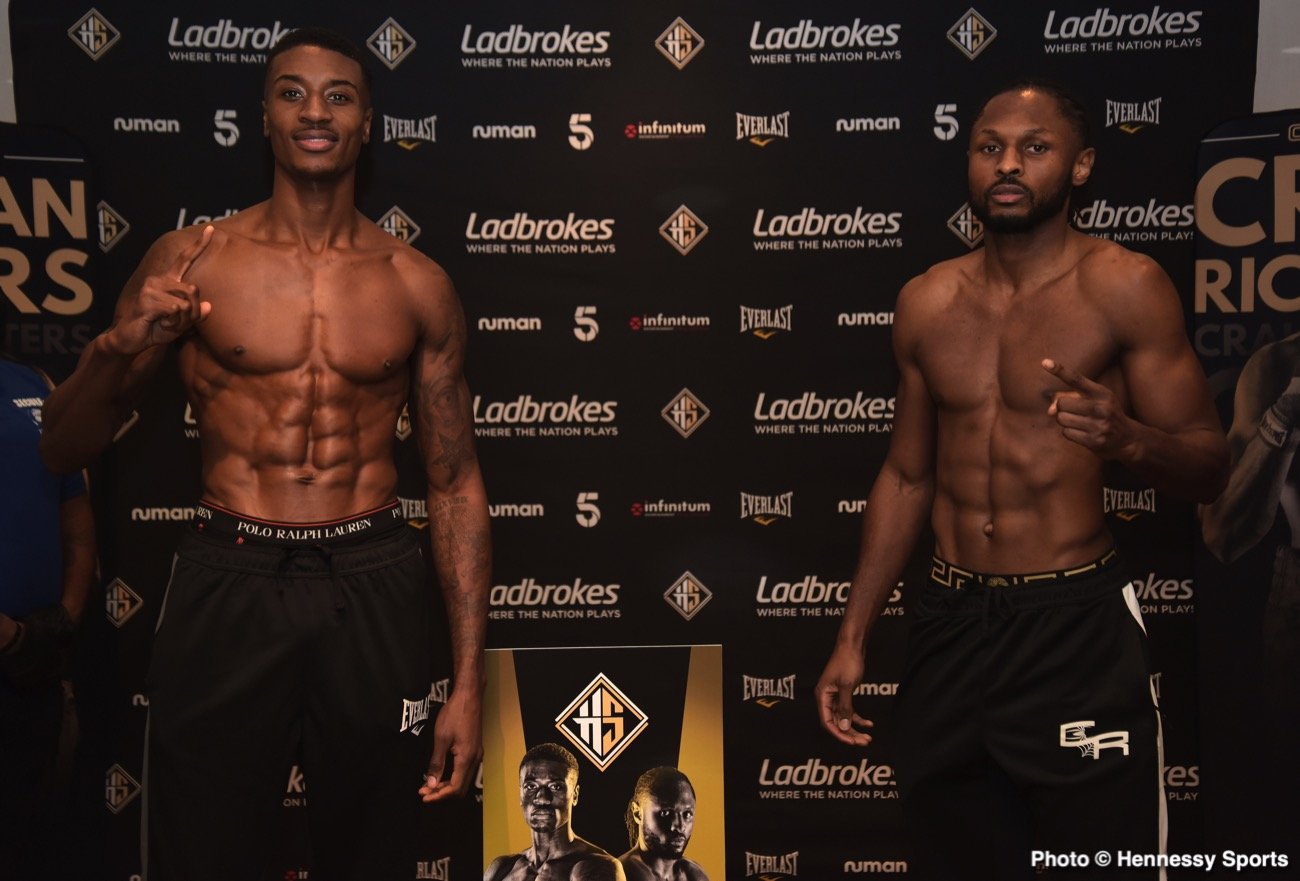 Their last e-press conference descended into a war of words, would it be different this time? Shakan Pitters and Craig Richards again went for it ahead of their big showdown this Friday (18 December) at the Fly By Nite TV studio in Redditch, exclusively LIVE and FREE on Channel 5.

Birmingham’s undefeated Pitters defends his British Light-Heavyweight title for the first time against London rival Richards in the final domestic title fight of the year and highly anticipated Christmas cracker.

The fight has been postponed three times since last December and delayed by the COVID-19 pandemic, but finally the bitter rivals will get it on once and for all this Friday night and with both boxers holed up in the fight hotel in Redditch, tensions are running high.

Press conference host Danny Flexen from Seconds Out couldn’t separate them in the first e-presser back in September and was relishing the prospect of moderating the second round.

Birmingham’s Pitters put his title on the line in his first defence against London rival Richards this Friday (18 December) at the Fly By Nite TV studio, exclusively LIVE and FREE on Channel 5 in the UK.

After taking the COVID-19 test, both fighters and teams headed to their rooms to quarantine and await the vital all-clear results.

Hennessy Sports has again appointed the world leading genetics testing and digital health testing company Prenetics to undertake the integrated testing. Prenetics have successfully provided their services to the Premier League’s ‘Project Restart’ and The England and Wales Cricket Board.

Promoter Mick Hennessy applied stricter shielding measures for his boxers’ featuring on the event last Friday (11 December) to minimised their exposure to the coronavirus to ensure the boxers’ would be able to feature on this Friday’s show.

Undefeated Pitters makes the first defence of the Lonsdale belt against Londoner Richards this Friday (18 December) at the Fly By Nite TV Studio in Redditch, live and free in the UK on Channel 5.

Earlier this month Yarde was turned over by Lyndon Arthur to win the Commonwealth and WBO Intercontinental 175lb titles and heavyweight Dubois lost to bookies’ underdog Joe Joyce in their British, Commonwealth and European title scrap.

The Birmingham ace won the British title in a tough twelve round battle against Chad Sugden and isn’t prepared to let the titles go without a fight and realises the threat Richards presents.

“Those results show how tough this sport is to hold onto the titles and to take nothing for granted,” Said Pitters.

“Richards is a dangerous challenger and I’ve not looked beyond this fight against him. Everything has been focused on this fight only and retaining my title in my first defence,”

“Whilst they were upsets, I wasn’t completely surprised by the Yarde and Dubois loses. Arthur is a top quality fighter and vastly underrated, whilst Joyce was a class former Olympian and I couldn’t understand why he was installed as the underdog by the bookmakers,”

“Knowing that Richards wants to rip the title from me, take away my career, future earnings and being able to feed my family is all the motivation in the World I need to win and keep hold of this title.”

The Pitters-Richard showdown has been a long time coming. They were due to meet for the British title in March this year after promoter Mick Hennessy won the purse bid, but Richards withdrew with a viral infection and Sugden stepped in to replace him – with Hennessy giving Richards the first shot at the winner.

Pitters v Sugden was then postponed because of the COVID-19 pandemic outbreak and the ensuing national lockdown, but then with the recommencement of sport behind closed doors they finally clashed in August and Pitters won widely on the scorecards with a superb boxing display.

Hennessy then delivered on his word and gave Richards his chance with the bout set for November 14, but then Pitters suffered an injury in training and the fight was rescheduled for this Friday.

Despite the turbulent year, Pitters aims to end they year on a high by beating Richards and move into a positive 2021.

He added, “This time last year nobody could have predicted the way this year has turned out. Coronavirus has turned the World upside down and caused so much disruption and pain to everything we took for granted in our everyday lives,”

“I think one of the biggest factors in fighting the pandemic is the human fighting spirit, not giving in and coming together to battle the disease and we are starting to turn the war more in our favour with the vaccine roll out,”

“Through it all, I’ve kept the faith, kept me and family safe and just believed that things would eventually start get back to normal. Whilst we’ve still got a long way to go, I’m a positive believer and things will change next year,”

“I’ve not let the coronavirus derail me and I certainly won’t let Craig Richards on Friday night.”