Sergey “The Krusher” Kovalev (34-4, 29 KOs), living in Long Beach, CA, will fight Tervel Pulev in his cruiserweight debut on Saturday, May 14 at The Kia Forum in Inglewood, CA and will be streamed live on Triller and Fite.tv. Tickets, starting at $31.00, are on sale and may be purchased through TrillerFightClub.com, TheLAForum.com, and Ticketmaster.com 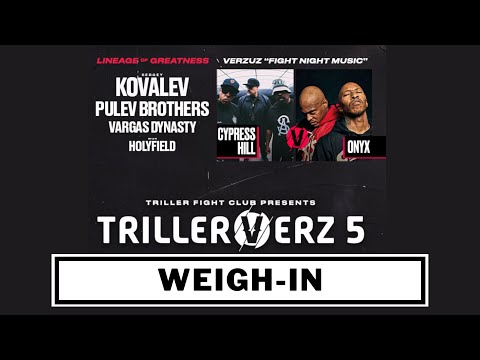 The Krusher says “My motivation to keep going? First is money (laughing) and money is energy. Second is my son. I want to become world champion once again so he can see that ‘don’t ever give up.’ Right now, it is all for my kids. I tell them and show them to follow your dreams and your dreams will come true. If I ended my boxing career right now, I would feel uncomfortable for the rest of my life.

“Since I lost my title to Canelo, I am not on the top. Since I changed to cruiserweight it has changed everything, most importantly I don’t have to worry about losing the weight. Actually, the last two years fighting at light heavyweight, and making 175, was miserable for me.”

2019 “was a crazy year” for Kovalev. In February, Sergey won back the title from Eleider Alvarez. Then the WBO ordered a mandatory defense against Anthony Yarde that was first scheduled June in Russia. He arrived in Russia one month before the fight and “was right on weight at 182.” The fight was soon cancelled the first week of June and rescheduled for August 24 “so I went back home to US and during those three weeks we celebrated my wife’s birthday and all the sudden I got back to 200 pounds,” which is his regular walk-around weight. Training camp for the new date began June 20 and on July 20 he returned to Russia. “The day after the Yarde win, I got the offer to fight Canelo, and two weeks later returned to training camp. Some fighters fight for their legacy, I fight to fight. I have never turned down a fight.

“The night of the Canelo fight, we are at the door to begin the ring walk and a fella with a headset came to us and said, ‘we are not ready, we have to wait for the other fights (the UFC card) to finish.’ We waited for another hour. An hour! I went to the corner after round seven and I said to Buddy ,”Buddy, I am spent, totally,” and he said “I see.”

“Now I feel fresh. Making 175 was killing me. I was at the point either quit or move up in weight. Now I can eat everything at any time.”

“This is a new step in my boxing career. I plan to fight a couple more years. No more than three years. I am not sure how many fights it will take to get a title. But if I win a title next year – then I will stop. How long will it take to get a title shot? It could be a two or three year wait, but we will see. I can fight into my 40’s no problem. I just had two years off. I am fresh.”

But on the other hand, after May 14, if Jake Paul wants to fight, I will be ready, and I will knock him out.”

“Buddy was a real smart boxer and a real smart trainer and coach. Sometimes a good boxer can’t be a good coach and sometimes a coach wasn’t a good boxer. But Buddy has it both ways – good boxer and good coach. He does what he needs to do to get me prepared the best for the fight. Buddy gives me tactics and sound techniques and strategy. Together we are working towards getting another world title, this time in the cruiserweight division and become champion for the fourth time.”

For this eight-week training camp Sergey is staying in a hotel in close to the park where he runs and his boxing gym is a twenty minutes away in Van Nuys. “The most difficult part of my career right now is being away from my family,” said Kovalev. “Ten years ago it was just me, now I have a wife and two kids. To be away from them for two months is tough.”

Kovalev hits the boxing gym at 5 pm daily. He spars three days a week and is off on Sunday.

A non-sparring evening workout would be technical training and some game plan.

The Krusher arrives at the fitness gym early morning – every day except for Sunday – with strength and conditioning coach/extraordinaire Teddy Cruz. They will do a workout depending on how much boxing workout he does the evening prior.

The morning after a sparring day would be a low intensity 45-minute session and include: (1) Warm up stretch for 5-10 minutes (2) Squats combined with shoulder presses – 20 reps with 25 lb. dumbbells (3) Step lunges with torso twisting with 10 lbs. medicine ball for 20 reps, (4) Static lunges with curls for 20 reps with 25lbs dumbbells (5) Abs for 600 reps

This will be Kovalev’s first fight since November 2, 2019. “When you don’t fight for a long time you lose boxing skills. On the other hand the time off has helped me rest and get rid of all of my injuries – it’s like a renewal.

“My first two weeks of sparring I couldn’t touch my opponent (laughing) mostly because I was heavy, about 210 lbs. But then by week three, I had lost some weight and my boxing skills came back. By May 14, I will be at 187 pounds and there will be no rust.

“I don’t really study my opponents. I will watch one or two rounds from his last couple of fights so I can see what style he likes – does he like to fight inside or from a distance then I can prepare. I just can’t wait to get inside the ring and show the world who is the best cruiserweight on the planet.

Kovalev was initially preparing to fight Fanlong Meng but then “Egis (Klimas, manager) called me and said, “you have a new opponent – it is Pulev.” I said “Pulev? He is a heavyweight,” and Egis said “no, he has a brother that is a cruiserweight,” so I said “OK, Let’s go.”

EVAN “Yung Holy” HOLYFIELD PREPARING IN HIGH ALTITUDE FOR HIS TRILLER DEBUT SATURDAY MAY 14, AT THE KIA FORUM

Evan Holyfield (9-0, 6 KOs) from Atlanta GA and son of Five Time World Heavyweight Champion Evander Holyfield, is preparing for his May 14 fight at The Kia Forum in Inglewood, CA. TRILLERVERZ 5 will be streamed live on Triller and Fite.tv.

Tickets, starting at $37.00, are on sale and may be purchased through TrillerFightClub.com, TheLAForum.com, and Ticketmaster.com at http://www.ticketmaster.com/trillerverz5

Evan is training in Colorado Springs. It’s the first time in his career doing high altitude training and has been there for over a month.

“It’s my first time training in Colorado Springs,” said Holyfield. “It’s fun being around the people that I am around – my trainers Mike Stafford and Bert Wells and fighters Adrian Broner and Rau’shee Warren.

“You’d think Broner would be a loud-mouth, but he’s kind of funny and a real hard worker.”

Bert Wells have been with Evan since his amateur days and Stafford has been training Evan for four fights.

“The biggest challenge at training camp has been the thin air. I could run and everything else fine, but I was having trouble with the boxing workouts, particularly sparring. I was having trouble catching my breath. I talked to my dad after the first week about the challenges. He said the same thing happened to him the first time he trained in high altitude, and I’ll get acclimated after a week or two and he was 100% right. After a week I felt better and had all of my energy.”

On Sunday “We may get some basketball in. It’s not as much fun here though, it’s a little harder because of the elevation.”

“I’ve run into Keyshawn Davis a few times at the fitness center and also Terence Crawford and Bomac (Crawford’s trainer Brian McIntyre) while running around the lake.”

With Stafford Evan’s been “working on using my distance and using my jab and the rest you’ll just have to see when it comes down to the fight. been doing the right thing and I’m excited to see what happens.” He has not been working on anything special for this fight since “This is my first time up here so I feel like that is special enough. We haven’t worked on anything specific for this fight, other than working on going to the body. After all, training at this high altitude should be special enough.”

At the Forum on May 14 will be “Mom for sure, dad maybe, Elijah wants to come but he may be in (Cincinnati) Bengals camp.” Elijah was recently promoted from the practice squad to ‘The 53’ man roster.