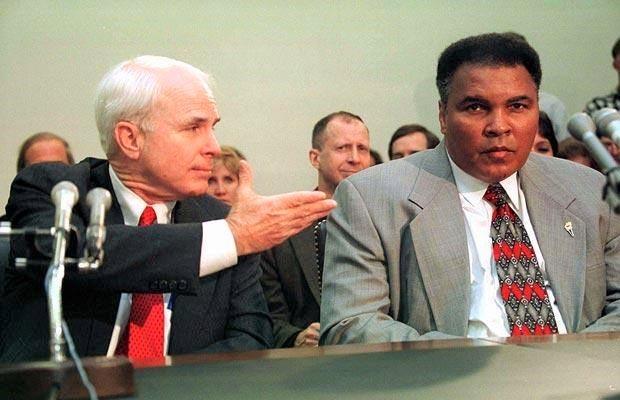 Senator John McCain will be posthumously presented a Lifetime Achievement Award for his tireless work to protect boxers and elevate the sport this Friday night at a special ceremony during the USA Boxing Alumni Association Hall of Fame reception at the Golden Nugget Hotel & Casino in Lake Charles, Louisiana.

The HOF reception is being held in conjunction with the ongoing 2020 U.S. Olympic Team Trials for Boxing and 2019 National Championships at the Lake Charles Civic Center. The finals of the Olympic Trials will be held Sunday, Dec. 15, at the Golden Nugget Hotel & Casino. Hall of Fame broadcaster Al Bernstein from Showtime Sports will serve as the event’s emcee for the third year in a row.

The late Sen. McCain boxed at the U.S. Naval Academy, where the 5′ 7″ lightweight competed three years as a fearless boxer who reportedly always came forward, never reversing gears. In his final year, he managed the battalion boxing team to a brigade championship.

“Our family believes our father would accept this award graciously as a very high honor,” daughter Megan McCain said on behalf of the McCain family. “The courage, character and action needed to step into the ring is something he felt very strongly about.

“He learned many life lessons through boxing, including the value of fitness, discipline, individual performance training and operating as part of a team. Boxers run up against opposition they have no idea how to attack or defend against, yet they figure it out and learn about themselves, as well as develop endurance during the process.”

“Senator McCain was a true ally to the sport, having personally understood the courage and risk-taking required from those who enter the ring,” said Chris Cugliari, USA Boxing Alumni Association Executive Director. Throughout his career in politics, USA Boxing communicated with his office numerous times as part of a collaborative effort to safeguard the future of Olympic style, amateur boxing, and Senator McCain never hesitated to offer to do more for our athletes. For this and many other reasons, the USA Boxing Alumni Association looks forward to honoring his legacy this weekend.”

CLASS OF 2017: The charter class was headed by Muhammad Ali and Evander Holyfield, in addition to veteran coaches Roosevelt Sanders and Tom Coulter.