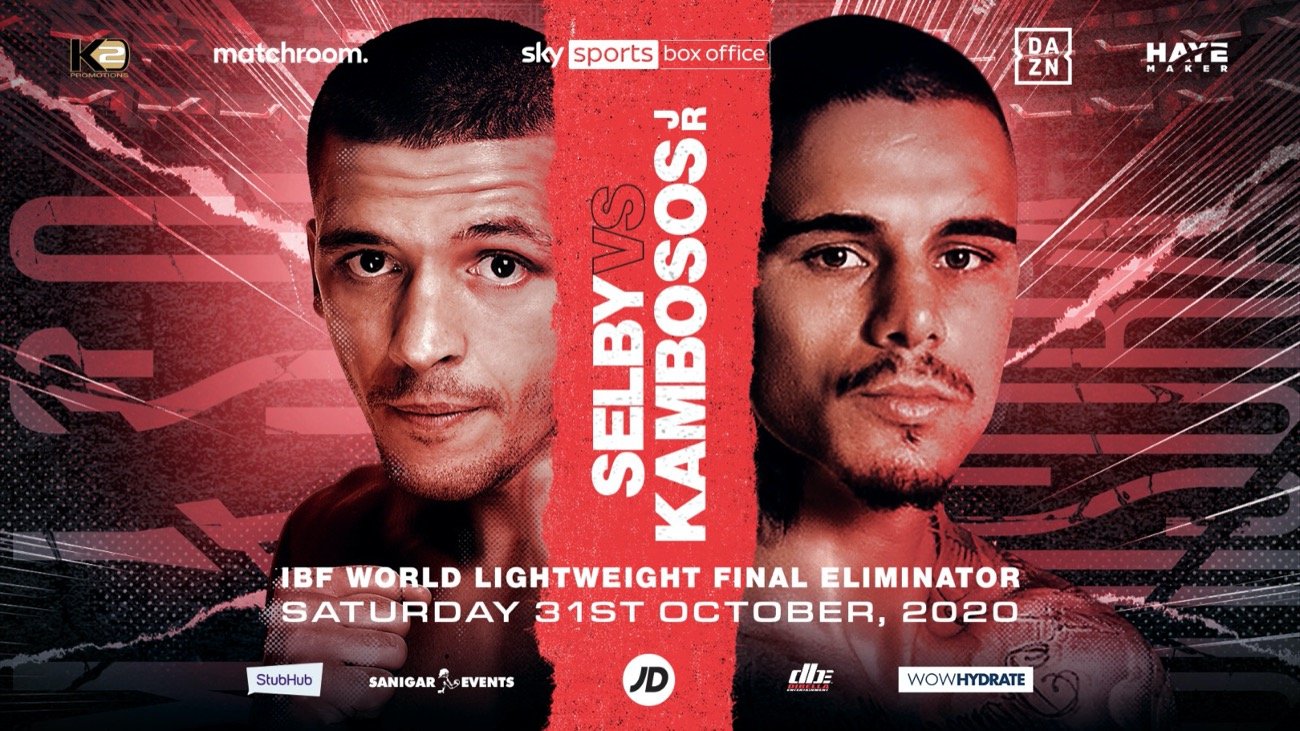 Lee Selby can take a step closer to becoming Wales’ first ever two-weight World Champion when he takes on George Kambosos Jr in a Final Eliminator for the IBF Lightweight World Title on the undercard of Oleksandr Usyk vs. Derek Chisora on Saturday October 31, shown live on Sky Sports Box Office in the UK and DAZN in the US.

Former IBF Featherweight World Champion Selby (28-2, 9 KOs) made the move up to Lightweight after losing his title to Josh Warrington at Elland Road back in May 2018, and the 33-year-old from Barry has won two in a row at 135lbs, most recently beating Ricky Burns over 12 rounds last October.

Next up for ‘Lightning’ is a scheduled 12-rounder against Australia’s unbeaten contender ‘Ferocious’ Kambosos Jr, who had previously promised to retire Selby in front of his home crowd when they were due to meet at the Motorpoint Arena Cardiff back in May.

“On social media he comes across quite outspoken and arrogant,” said Selby. “He’s saying he’s going to do this and do that. To look at him, he looks like a very good fighter. He’s got fast hands; he looks like he can punch. He can box a bit as well; he brings a lot of pressure. He’s young, hungry and ambitious.

“When we did an E-Press Conference earlier in the year he told me that every time he hit me in sparring, he rocked me to my boots. That in itself just gave me extra confidence, knowing that he’s making up tales about sparring.

“You don’t speak to anybody like that. It is disrespectful. To me it’s water off a duck’s back. It doesn’t bother me. I don’t know whether he’s trying to get me to fall into a trap, but that’s just not who I am. I’ve got very thick skin.”

A number of Welshman have had the opportunity to become two-weight World Champions, including Caerphilly’s Robbie Regan and Newport’s Gavin Rees, but Selby is promising to go one better than his countrymen by dethroning Teofimo Lopez when he gets the chance.

“If I come through this fight then I’ll be in another massive World Title fight,” added Selby. “Teofimo Lopez is within touching distance and a dream is close to becoming a reality for me. It will be life-changing for me if I can get through this fight.

“I’ll become the first Welshman to become a two-weight World Champion. All I have to do is win two fights. Two fights and I’ve written my name into the history books. It would not only be massive for Welsh boxing, but British boxing too. You can’t put a price tag on that.

“On October 31 you’re going to see a Lee Selby win, by any means possible, whether the stoppage comes or it’s a 12-round decision – you’ll see a Lee Selby win. I’ve had time to grow into the weight. During lockdown I was doing a lot of strength and conditioning work and I feel like a fully-fledged Lightweight now.”

George Kambosos Jr says he has been training ‘like a man possessed’ ahead of his crucial IBF Lightweight World Title Final Eliminator showdown with Lee Selby on the Usyk-Chisora undercard on Saturday October 31, shown live on Sky Sports Box Office in the UK and DAZN in the US.

A win for the undefeated Australian (18-0, 10 KOs) would see him become Mandatory Challenger for newly-crowned Unified Lightweight King Teofimo Lopez, who brilliantly overcame Vasiliy Lomachenko by a unanimous points decision in Las Vegas on Saturday.

Hailing from Sydney, 27-year-old Kambosos Jr announced himself as a rising contender in the 135lbs division by defeating former World Champion Mickey Bey on away territory at Madison Square Garden in New York last time out.

‘Ferocious’ will be aiming to make it two wins in two against former champs when he meets Wales’ former long-reigning IBF Featherweight ruler Selby next weekend on an unmissable evening of Halloween fight action.

“Beating Lee Selby means everything to me,” said Kambosos Jr. “I’m hungry, focused and have trained like a man possessed to handle business on October 31st. This is a young man’s sport and Lopez proved that against Lomachenko when he became the Unified Lightweight World Champion and I will prove it once again against Lee Selby.

“This hungry young lion will become Mandatory, that is my complete focus, this is why I have sacrificed so much and then you best believe that ‘Ferocious Kambosos’ will be primed and ready to take all the belts off another hungry, young lion in Teofimo Lopez. Let’s see who the real king of the jungle is.”

Selby (28-2, 9 KOs) edged out Scottish legend Ricky Burns via a majority decision at The O2 in London last October to stay in line for another World Title shot and now finds himself within touching distance of becoming a two-weight World Champion.

“He’s very confident in himself,” said Selby. “If you listened to him talk you’d think he’s the next Muhammad Ali – which he’s not. Looking at his record, it’s difficult to gauge how good he really is. His best win came against Mickey Bey when he was past his best at 36 and inactive. The rest of his record is padded.

“This fight has been a long time coming and I’m glad we’re just over a week away now. I’m one step away from a shot at the IBF Lightweight World Title and my dream of becoming Wales’ first ever two-weight World Champion.”