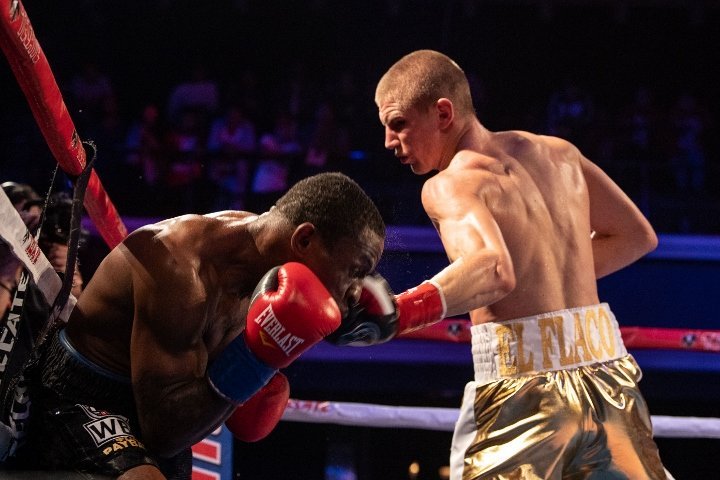 Said Mario Abraham of local promoter Max Boxing, “Bohachuk vs. Davila garnered one of the highest rated shows in the history of Grupo SIPSE TV. We are very happy with this high rating and look forward to Bohachuk coming back in the future.”

Bohachuk is promoted by Tom Loeffler’s 360 Promotions and Ural Boxing Promotions in addition to being trained by the renowned Manny Robles at his Legends Boxing Academy in Norwalk, CA. The super welterweight power puncher is rated #8 by the IBF and #9 by the WBC.

“Serhii was very busy before the fight doing a wealth of publicity, particularly with the Mexican press. Fight fans in Mexico were very excited to see him fight and he entertained them with a dominant performance, stopping Davila in the sixth round,” said Tom Loeffler of 360 Promotions. “We look forward to Serhii fighting again soon and bringing him back to Mexico in the future.”

Promoted by Tom Loeffler’s 360 Promotions and trained by the renowned Manny Robles, the 25-year-old Ukrainian native has taken the Southern California boxing world by storm with his show-stopping knockouts since turning professional in 2017. Headlining the acclaimed Hollywood Fight Nights events, Bohachuk has a huge international following from boxing fans watching their live broadcasts.

“Serhii has become one of the most talked about rising stars in boxing,” said Loeffler. “Boxing fans are excited to see if he can continue his knockout streak against Alejandro Davila, the toughest opponent he’s faced. He’s been training very hard with Manny Robles for this fight and if victorious, we’re certain there will be bigger opportunities for him in the near future.”

Making his first start of 2020 against Davila due to the pandemic, the Los Angeles resident Bohachuk scored five knockouts victories in 2019 as well as five knockout victories in 2018. He is currently ranked #13 by the World Boxing Council and #8 by the International Boxing Federation.

Fighting out of Mexico City, MX, the once-beaten Davila was undefeated over the first five years of his pro career before losing a hard-fought clash with Canadian Mikael Zewski on November 23, 2019 in Quebec. Fighting twice this year, Davila has bounced back with dominant wins over Nestor Fernando Garcia and Jose Guadalupe Rosales.

Bohachuk vs. Davila will be broadcast live in Mexico on ESPN Knockout with details on an airing in the United States and internationally to be announced shortly. The event is promoted by Max Boxing and sponsored by Team Berchelt.

Undefeated, world-rated Mexican welterweight Santiago “Somer” Dominguez (22-0, 17 KOs) will be back in action this Saturday (Sept. 26) in Mexico, when he pursues yet another title belt, the vacant North American Boxing Federation (NABF), to add to his growing collection.

The 28-year-old Dominguez, fighting out of Obregon, Sonora, Mexico, is the reigning World Boxing Council (WBC) FECARBOX and USNBC (United States) 147-pound champion. Saturday night he headlines a De La O Promotions card in Cocorit, Sonora, Mexico. Ranked No. 14 in the WBC and No. 1 in the NABF, the fierce knockout artist faces fellow countryman Jose Rosario Cazarez (19-5-1, 10 KOs) in the 10-round main event for the vacant NABF crown. Blair Cobbs reportedly relinquished his NABF championship rather than fight his mandatory defense versus rising star Dominguez.

“I was surprised and humbled when I found out I was fighting for the vacated NABF belt,” Dominguez commented. “I will not disappoint in this fight; my coaches have me ready.”

“We believe Santiago Dominguez will be a world champion,” said his promoter, RJJ Boxing CEO and co-founder Keith Veltre. “He’s the highest-ranked Mexican welterweight in the world and more than ready to move up to the next level. This will be his next step towards becoming the future of the welterweight division. We appreciate the chance for Santiago to fight for the NABF championship”

Cazarez, who is unbeaten in his last seven fights (6-0-1), has been stopped only once, four years ago. Santiago will certainly test his chin.

“Our team is very appreciative for the opportunity awarded us from Mr. Duane Ford and the NABF,” Santiago’s manager Terry Hollan added. “It is certainly an honor!”