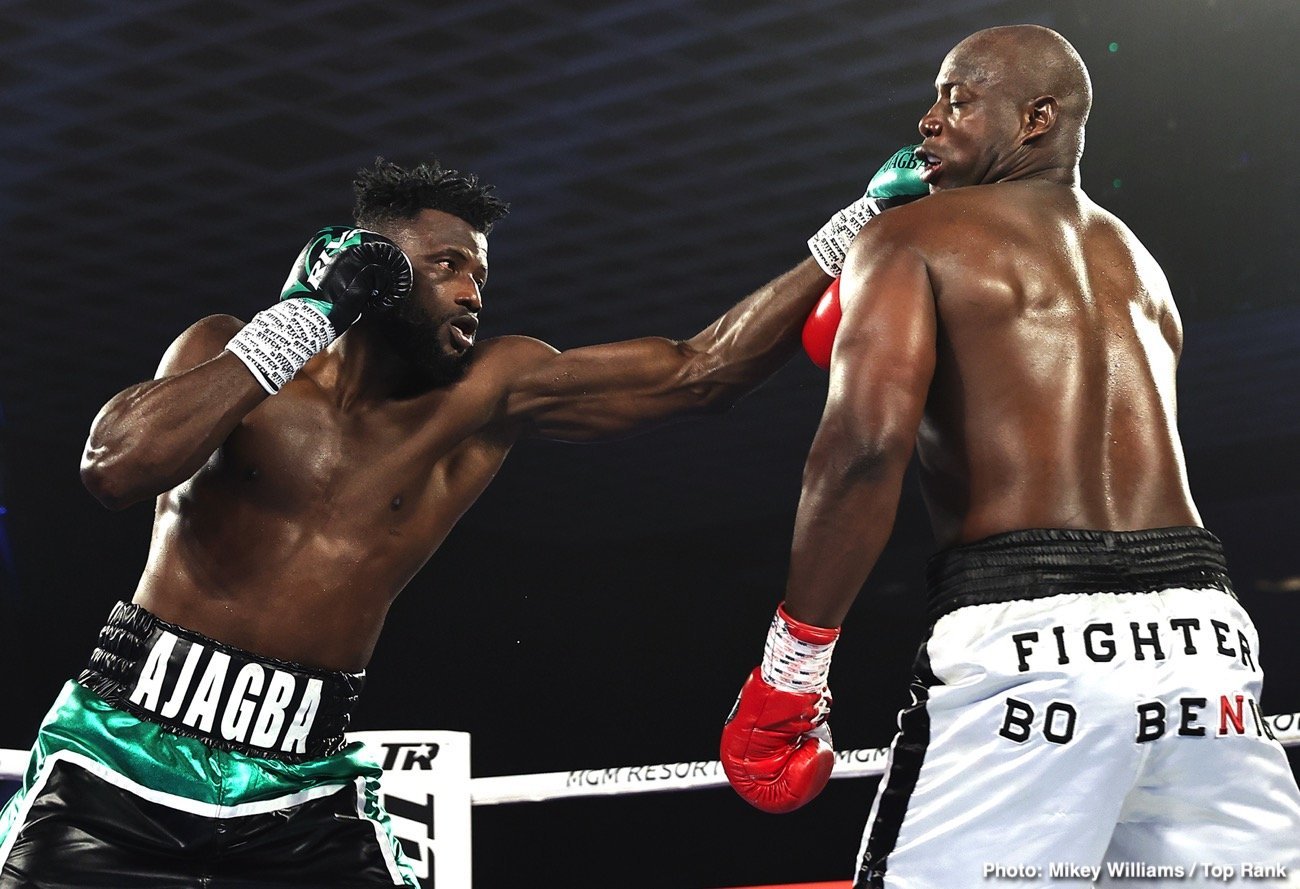 Nigerian Olympian Efe Ajagba is completing final preparations for his highly anticipated showdown with Cuban foe Frank Sanchez on October 9 at the T-Mobile Arena in Las Vegas. The bout will be featured on the all-heavyweight undercard of Fury vs. Wilder III live on ESPN+ and FOX Sports PPV.

The 6-6 power puncher views Sanchez as a very skilled fighter and he has been working closely with trainer Kay Koroma and his team in preparation their October 9 contest. Ajagba resumed training camp near his Houston-area home last month following the card’s postponement and has moved camp to Las Vegas to complete his final preparation.

Like many of the fighters on the card, the fight postponement was difficult for Ajagba but a special delivery brightened the early days of the delay. Ajagba and his girlfriend Tiya welcomed a beautiful baby girl, Tahari, in early August. Ajagba treasures being a father and says that playing with his son, Tiyon, is one of his favorite pastimes when he’s not training and he’s enjoyed spending precious time with his baby girl since her arrival.

Known for his thunderous punching power, Ajagba already participated in a knockout of the year contender in his April bout with Brian Howard, viciously ending the bout in the third round with his signature right hand.

Ajagba has been known for his massive punching power since his amateur days, scoring a knockout in his first bout of the 2016 Olympics as the only member of the 2016 Nigerian Olympic Boxing Team. He then went on to score the fastest victory in boxing history when his opponent exited the ring before the opening bell in 2018.

Ajagba plans to showcase additional elements of his arsenal in addition to punching power when he steps in to the ring on October 9 in his first PPV appearance.

Efe Ajagba is most known for his devastating punching power and that special talent was evident from the first punch Ajagba threw. Yet it didn’t come in a boxing ring, but in a street fight in his native Nigeria. His friends who witnessed the altercation couldn’t help but see Ajagba’s pugilistic talent and encouraged him to take up the sport of boxing. An all-around athlete, he had played soccer, the most popular sport in Nigeria (and worldwide) as well as participating in track and field. Yet he had never previously considered boxing.

When deciding whether to take up the sweet science, Ajagba sought the advice of his mother and she encouraged him to give it a shot. She could have never have known at the time where the sport would take him. He began boxing at the age of 17 and the early days were extremely challenging as he juggled training with his work at a bakery in his hometown of Ughelli in the Delta State of Nigeria. The teenager was helping to provide for his family and needed to work to help put food on the table. His amateur coach saw the challenges he was facing and created a schedule that allowed him to more successfully balance his training time with his hours at work.

Ajagba soon got the call to compete in the State competition and then the national boxing trials. He knocked out each of his opponents en route to a spot in the 2014 Commonwealth Games. Ajagba grabbed his first international medal at the event, winning a bronze medal for Nigeria.

Yet, the international success didn’t provide the financial rewards that Ajagba and his family were hoping for so he continued to balance his work responsibilities with training. The financial challenges didn’t diminish Ajagba’s focus on the goal of competing in the 2016 Olympic Games. He knew that boxing in the world’s biggest sporting event would open doors for his professional career and he was right. Ajagba clinched a spot in the 2016 Olympics with a gold medal at the African Olympic Qualifier in Cameroon. He was the only Nigerian boxer to earn a berth in the Rio Olympics and would soon head to Brazil as a one-man team.

He opened the Olympics with a devastating first round knockout and his performance quickly caught the eye of many key figures in the professional boxing world. Ajagba advanced to the quarterfinal round in Rio before dropping a decision to top ranked Ivan Dychko from Kazakhstan.

Following his Olympic run, he decided to enter the paid ranks and moved to the United States to begin his professional career. He made his professional debut in California in July of 2017 and began racking up knockout victories. The 6-6 heavyweight has built a perfect 15-0 record with 12 of those wins coming by knockout. His powerful right hand intimidates many foes, even causing his sixth professional opponent Curtis Harper to exit the ring before the opening bell, giving Ajagba the fastest victory in history.

Ajagba settled in the Houston area upon moving to the United States and has remained there since making the move. Not long after arriving in the U.S., he met his girlfriend Tiya, and she helped him get acclimated to his new country. From teaching him to drive to working with him with his English, he credits her with helping him adapt to the American system. The two of them now have two children – a son, Tiyon and a baby daughter, Tahari, who was born this past August. Ajagba says that he is so blessed to be a father and it’s a role he’s been wanting for a long time. When he’s not training, he loves to play with his son and help him release all his energy at a local park.

The move to the United States has kept Ajagba from seeing his family in Nigeria for four years but he remains connected with them regularly through What’s App and hopes that his parents will get the chance to meet their grandchildren soon.

The Nigerian Olympian hopes to use his story of overcoming obstacles to encourage and uplift others, particularly children. Although he came from a poor family in Nigeria, he worked hard, believed in himself and remained focused on his goals no matter the challenges he was facing. He wants others to know that no one will fight as hard for them as they will for themselves so it’s important to lock in fully on their individual goals and chase them with all their might.

Ajagba is currently preparing for his 16th professional fight with fellow undefeated heavyweight prospect Frank Sanchez of boxing powerhouse Cuba. The bout will highlight the undercard of the Tyson Fury – Deontay Wilder fight at T-Mobile Arena in Las Vegas on October 9.