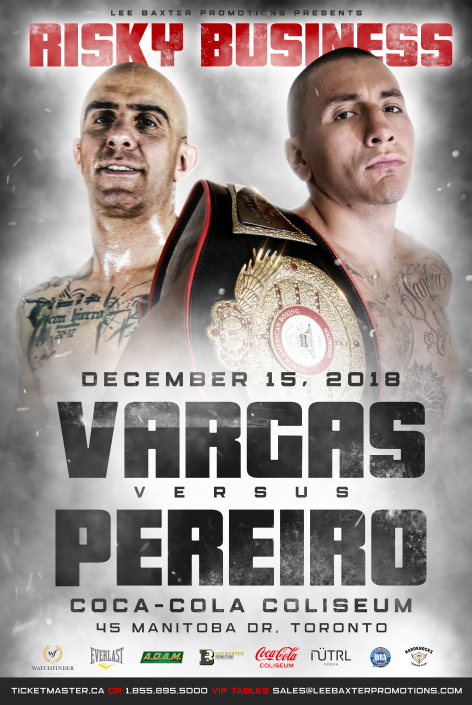 Adding to one of the biggest months in recent memory for the sport of boxing, Lee Baxter Promotions has officially announced one of the most action-packed cards of the year in Canada.

It’s significant move for Canada’s top promotional outfit, which had previously based its major events in Brampton, ON. The LBP “Next Generation” series at the Danforth Music Hall has become a popular mainstay, and it was clear the market for boxing in the downtown core of Toronto was there.

The Coca Cola Coliseum is the home of the AHL’s Toronto Marlies, and a spot for some of the city’s biggest concerts and attractions, including WWE wrestling.

“It’s a proud moment for our company to be hosting a show at the Coca-Cola Coliseum, a major venue in downtown Toronto proper. We’ve had tremendous success with shows in the suburbs, and our prospect shows are almost instant sell-outs at the Danforth Music Hall—it’s time to take the next step,” said Baxter. “The Coca-Cola Coliseum is a perfect venue for a fight, with beautiful sightlines and state of the art facilities. We hope that this will be the new home of boxing in Toronto for many years to come.”

In the main event, Samuel Vargas will return home to face the undefeated Adrian Gabriel Pereiro, as he begins a new campaign at light welterweight. Vargas is fresh off a thrilling bout with former world champion Amir Khan. Despite coming up short on the scorecards, Vargas not only gained fans, but proved to have plenty of them already. The Colombian-Canadian banger dropped Khan early in the bout, and had him hurt later on in the contest as well. In the end, the fight was the most-watched in the history of U.K. subscription television.

Vargas is now honing his craft in training camp in Spain alongside former welterweight champion Kell Brook, as he is determined to return to Canada an improved fighter.

“Every time Sammy has taken a loss, it’s been to a top-level fighter, whether it’s Errol Spence Jr., Danny Garcia or Amir Khan. Every time, he’s taken it as a learning opportunity and has come back and even better fighter,” said Lee Baxter. “After the Khan fight, he didn’t waste any time, he got right back into the best training camp he could be in, surrounding himself with the best fighters in the world—which is exactly where we think he can be at 140 pounds.”

In the co-feature of the night, an old fashioned local rivalry comes to a boil, as Patrice Volny battles Ryan Young.

Volny scored the biggest win of his career in September, as he dominated veteran Albert Onolunose to capture both the WBA-NABA and WBO-NABO middleweight crowns. The victory situates him in a prime spot within the world rankings in two major sanctioning bodies, remarkably, just twelve fights into his professional career.

In order to advance to the world level however, he’ll have to get past Young, who has developed a reputation for exciting action fights, with a strong following in Southern Ontario. Young is coming off a knockout victory over Jesus Olivares, a fight which was fought at light heavyweight, suggesting he could enjoy a size advantage over Volny.

“These are the kinds of fights cards are built around. It’s the perfect crossroads fight. Patrice is ready for the next step in his career, but you can’t take that step until you clear out all your local rivals,” said Baxter. “We know there’s some bad blood between these two, and knowing their styles in the ring, it can only make it even more exciting when we see them settle it.”

In addition to Volny, another one of Canada’s top middleweights, Steve Rolls, will be in tough aginst KeAndrae Leatherwood. Both men have enjoyed significant national television exposure, having graduated from the esteemed ShoBox series on Showtime.

Rolls is riding a wave of momentum stemming from his ShoBox victory over Demond Nicholson in 2017, and is now looking to move up in the world rankings. Leatherwood, meanwhile, is hoping to bounce back from a tough 2017—which saw him fall short against two former world champions, Andy Lee and Caleb Truax—and end 2018 on a high note.

Tickets for “Risky Business” will go on sale next week. VIP tables can be purchased by emailing sales@leebaxterpromotions.com. Doors open at 6:00 PM ET, with the first bout starting at 7:00 PM ET.