Former striker Bilel Jkitou has offered to play up front for Coventry City FC this Saturday after he has beaten WBC Silver Middleweight Champion Sam Eggington the night before.

And the unbeaten French hitman has the backing of his superstar friend the Real Madrid and France striker Karim Benzema.

Jkitou challenges Eggington for his crown at the Coventry Skydome Arena this Friday night, but the former Red Star forward is happy to swap his gloves for boots again and turn out at home for the Sky Blues, who are 7th in the Championship, against Middlesborough.

Before Jkitou switched to professional boxing he played as a striker for Red Star, the oldest league football club in Paris, and the sharpshooter scored 15 times in one season.

He has equalled his football prowess in the squared circle with an unbeaten 15-fight record and 6 knockouts and has captured the WBC Mediterranean Middleweight title as he heads into the biggest fight of his career against the Birmingham ‘Savage’ Eggington.

The 29-year-old has been in top form with back-to-back KO’s in his last three fights. In his last fight in March he destroyed Gyorgy Mizsei inside two rounds; prior to that in February last year he smashed Felice Moncelli in the opening round and Ernesto Olvera was despatched in eight rounds in October 2019.

Jkitou said, “It was a real pleasure for me to play and grow at Red Star, a club so prestigious in France for its level and its history. I scored about 15 goals in one season at Red Star. When I beat Eggington and take his title and while I’m still in the city before I go home I’d be happy to help out Coventry City against Middlesbrough

“Karim wanted to come to see the fight but with the Covid and the fact that he plays often complicates matters. Karim and I met on social networks he is passionate about boxing, he liked what I did and he wrote to me and since then our friendship is very healthy, we give advice to each other, we encourage each other. I also had to go see him in Madrid but the Covid has complicated all these trips, but it will be done very soon. Regarding the fight against Sam he encouraged me to win,”

He has also played alongside some other big French stars including former Spurs and Marseille winger Georges-Kévin Nkoudou.

Jkitou says he has transferred all the qualities of a striker such as accuracy, speed, strength and confidence to being a boxer and will use them to defeat against Eggington. He finished, “Yes exactly I am a striker in football but also in boxing and you will see that on September 10 in Coventry.”

Sam Eggington: “It’ll Happen For Me At World Level”

After marginally missing the boat at 147lbs, warlord Sam Eggington claims world honours await in the super-welter or middleweight divisions once he gets past undefeated French ace Bilel Jkitou on Friday 10th September at the Coventry Skydome Arena, live and free on Channel 5.

The 5ft 11in ‘Savage’ seemed a shoe-in to score a world title shot back in 2017 when, just 23, he sat proudly on the British, Commonwealth and European thrones, having just lifted the prestigious Boxing Writer’s Young Boxer of the Year award. 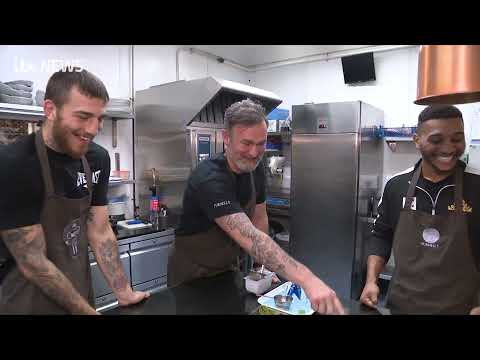 The humble but hardy father of three recently crowbarred his way into the WBC middleweight listings and still just 27 and with esteemed new promoter Mick Hennessy piloting his ship, the nine-year pro is as confident as he’s ever been that global glory awaits.

‘I still believe it’ll happen for me at world level or I’d not still be doing it and that’s the truth,’ says Eggington who, having previously scalped Paulie Malignaggi, conquered a second world champion when bagging the WBC Silver strap against Carlos Molina in Coventry last May.

‘Mick goes to hell and back for his fighters. He’ll take me where I need to go. I just have to play my part by winning the fights.

‘I’m so much happier now. My coaches will vouch that I’ve never enjoyed training as much ever and that obviously helps. Before boxing was just a job. After I’d done my two sessions, you couldn’t pay me to do another. Today, I gladly do my own additional training, even when I’m out of camp.’

The Smethwick-born fan favourite acknowledges that his ‘anyone, anywhere’ mindset has proven costly in the past. Most recently, he conceded an IBF rating after narrowly and controversially succumbing to Ted Cheeseman over 12 rounds last August, a decision that still rankles.

‘It’s a double-edged sword. The fans love that I’ll face anyone but now I have to get clever,’ concedes Sam has been trained and managed by Jon Pegg for his entire career.

‘I’ve never had a pathway before. My best chance of success would still probably be down at 154 because the biggest middleweights are seriously big lads. I know the type of confidence my size gave me at welter. But an opening came with the WBC at middle. It could be a risk fighting up at 160 but I’d not have a WBC belt if I didn’t take the gamble.

‘With hindsight, I should’ve vacated the European title in 2017 because making welter got too hard. But people place far too much value into wins and losses. One loss won’t ever spoil my career. You just get back on the horse and push on.

‘I don’t want to go through the eliminator process but if I was given a shot at Ted for the British (super-welter) I’d take it at a heartbeat.’

Though Eggington’s cabinet is overloaded with the bounty he acquired as a ‘rock’em, sock’em 147lber, the Stourbridge slugger insists he is a different, improved beast up at the higher poundage.

‘Experience brings you on and, technically, there’s a bit more about me now,’ says Eggington.

‘At welter, I always knew I was bigger and stronger than the other lads. Up at a higher weight, I have to box differently, worry more about what’s coming back.’

On Friday 10th September, headlining the show at the Coventry Skydome Arena, live and free on Channel 5, the world contender walks the tightrope against 15-0 French dangerman Bilel Jkitou, knowing that a stellar showing will vault him further up the WBC rankings.

‘I honestly know very little about him. He’s unbeaten, works the body shots, has got funny hair! That’s it,’ quips Sam.

‘I seldom watch even my own fights back but I’ve good coaches who take care of that part. He’s certainly not fought anyone at the level I’ve operated at.

‘The Skydome was a decent venue with just half a crowd in May. At full capacity, it’ll be some atmosphere. I need to win well, look comfortable to improve my ranking. Win, lose or draw, I never disappoint.’

Tickets are available to purchase now from only £40* from the Coventry Skydome Arena website https://iceaccount.co.uk/championship-boxing