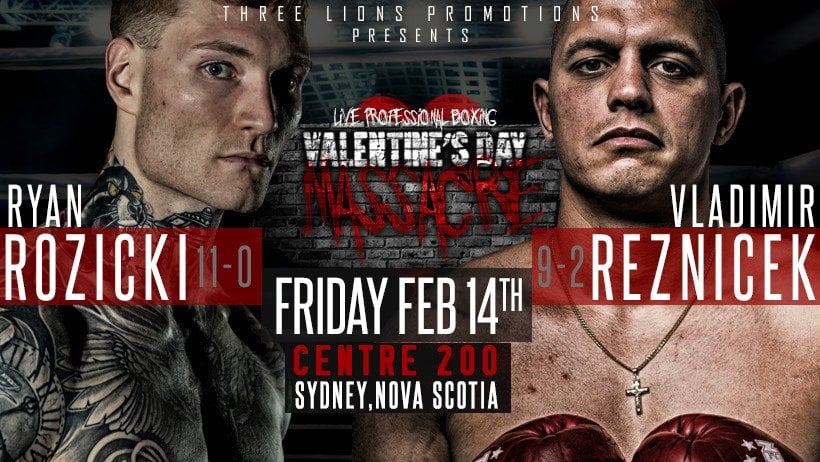 On Friday, February 14, Ryan “Bruiser” Rozicki (11-0-0, 11KOs) of Sydney Forks, Nova Scotia, makes his first defense of the WBC International Silver Cruiserweight Championship against Czech contender Vladimir Reznicek (9-2-2, 4KOs) at the Centre 200 in Sydney, Nova Scotia. With less than a week to go, Rozicki is putting the final touches on his camp at TNT Boxing Academy in Guelph, Ontario.

“Things are really coming together,” said Rozicki. “My coach Stevie Bailey is putting me through my paces. I’ve been upping the sparring a bit and my eye is holding up. I know a lot of people wonder about that cut, but I can assure everyone that it’s all good. I’m injury free and ready for February.”

Although many fans are content to see “Bruiser” flatten his foes early, others are keen to see the big Cape Bretoner tested over the distance. “We’ve thought the last couple guys might hang around a bit longer, but they keep falling over,” explained Rozicki. “I think Vlad will last a bit longer. At least I hope he will!”

For Vladimir Reznicek, nothing short of a win will do. “I’ve made living arrangements so I can be at the gym everyday,” said the Czech hopeful. “I don’t think anyone could train like I have been. I get world class sparring whenever I want. I’m feeling better than ever before. I’ve been a spoiler before and I’ll do it again. Everyone is talking about me lasting the distance. Won’t they be surprised when I knockout their hometown hero? I am taking that belt home to Czech with me. Facts!”

Three Lions Promotions has nothing but confidence in Rozicki, resigning the hard-hitting prospect earlier this week. “Ryan fits into our corporate culture extremely well,” said managing director Daniel Otter. “We’re thrilled to resign him. Together, we’re going to make some big things happen in short order. If he stops Reznicek quick, it’s back to the drawing board. We’ll keep upping the competition until we find someone who can withstand Ryan’s power. Maybe he just keeps stopping guys all the way to the top, that’s okay too!”

Ryan Rozicki wants a test on February 14 in Sydney; Hopes Reznicek can last into later rounds

The future is bright for Cape Breton boxing. On Friday, February 14, Three Lions Promotions (TLP) features two of the Island’s finest for “Valentine’s Day Massacre” at the Centre 200 in Sydney. In the main event, Ryan “Bruiser” Rozicki (11-0-0, 11KOs), the power-punching son of Sydney Forks, looks to continue his assault on the world rankings in a WBC International Silver Cruiserweight Championship defense against upset-minded Czech Vladimir Reznicek (9-2-2, 3KOs). Earlier in the night, Josh Prince of nearby Georges River will make his professional debut against Adam Hazelton (1-0-0) of Yarmouth in a four round, intra-provincial showdown.

“I can’t wait to be back in the Cape, doing what I do best,” said Rozicki. “I don’t think Vlad can really understand what he’s up against until he’s standing in the ring on fight night. He can watch all the video he wants, but that won’t prepare him for the crowd. He’s never experienced anything like the Capers. Video doesn’t do their ruckus justice.”

The crowd was electric when Rozicki defeated America’s Shawn Miller (18-5-1, 7KOs) for the championship back in May, with chants of “Bruiser” echoing throughout Centre 200 even before the opening bell. As Rozicki built momentum, the chants turned to visceral cheers, growing louder and more frantic with each of Rozicki’s punches. When Miller hit the canvas for the last time, the crowd’s cheers transformed in a frenetic roar. The energy of the place was overwhelming. The thousands of voices, entangled together, could deter even the most seasoned of ring veterans.

Amateur standout Josh Prince eagerly awaits his turn under the bright lights. “It’s really exciting to make my professional debut here at home,” explained Prince. “Not everyone gets to do that. In some places it may not make a big difference. It’s different here. The fans really make you feel like we’re all in this together. Maybe it’s an island thing. Hazelton will have to be spectacular to beat me here. I’m in the best shape of my life, with the loudest fight crowd in Canada. No excuses. Let the best man win.”

In other undercard action, undefeated fan favourite Jessie “Rock” Wilcox (14-0-2, 9KOs) of Hamilton, Ontario, returns to Cape Breton to meet the iron-chinned Luis Montelongo (12-7-0, 3KOs) of Mexico City over the eight round route.

Last but not least, New Brunswick native Carolyn Redmond (2-0-0, 1KOs) takes on Karina Rodriguez (3-1-1, 2KOs) of México over four rounds or less, looking to continue her march to a national championship.

Tickets are one sale at tickets.capebreton.ca and in person at the Centre 200 box office.