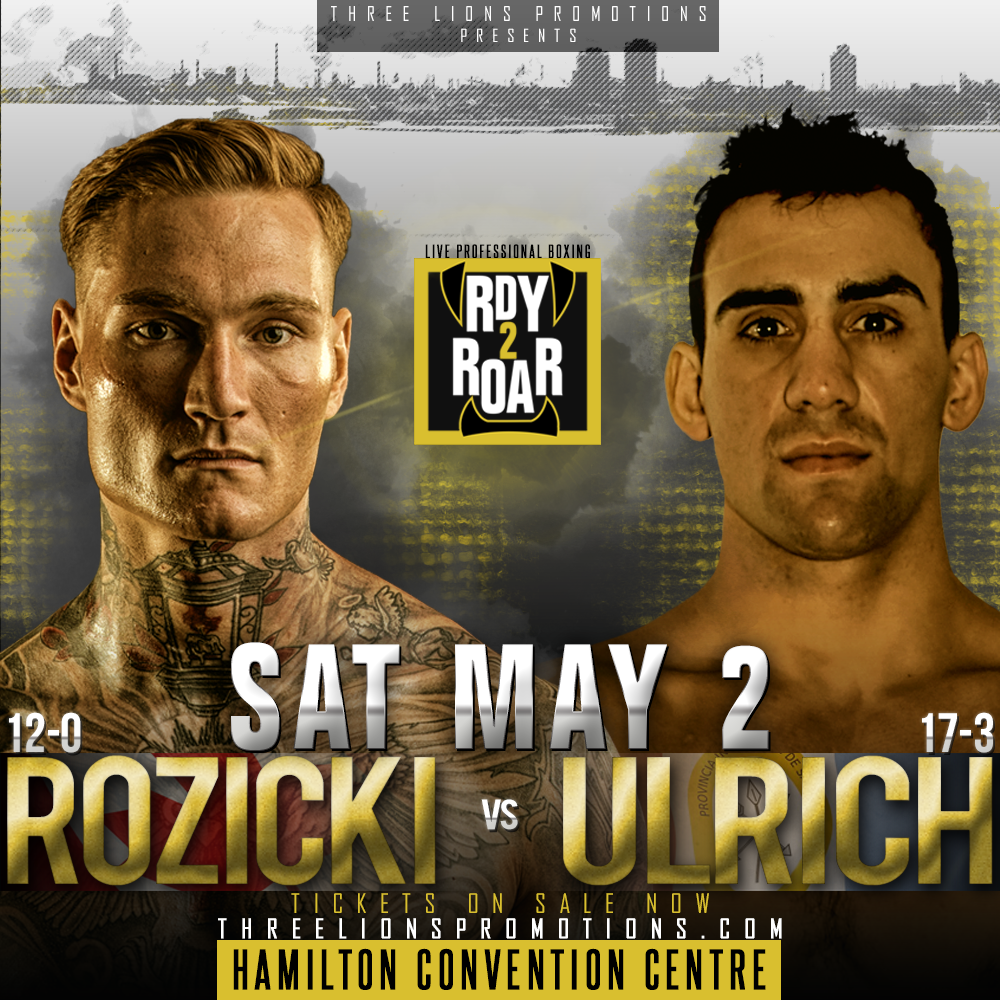 There’s something rumbling in from the nor’east! It rolled through Cape Breton Island back in February, knocking poor Vladimir Reznicek (9-3-2, 4KOs) flat on his back. A wicked storm is churning away, getting stronger with each obstacle it engulfs. Next stop, Hamilton, Ontario. That force of nature, conquering men from all corners of the world, is WBC International Silver Cruiserweight Champion Ryan “Bruiser” Rozicki (12-0-0, 12KOs). The fighting pride of Sydney Forks, Nova Scotia, Rozicki returns to the ring on May 2 to face former WBC Latino Cruiserweight Champion Jose Gregorio Ulrich (17-3-0, 6KOs) of María Juana, Santa Fe, Argentina, at the Hamilton Convention Centre.

“Ulrich comes battle-tested,” explained TLP Managing Director Daniel Otter. “He didn’t lose a fight as WBC Latino champion, defending that belt four times. He’s a guy who knows what being a champion is all about. I’m sure he’s hungry to make a statement against Ryan and bust back into the WBC rankings.”

“Ulrich has the same mindset as me,” said Rozicki. “To be a real champion, you need to defend your belt. That’s what I did against Reznicek and that’s what he did against four different guys. We’re both hungry fighters looking to test ourselves. It should be a perfect match up for the fans.”

Rozicki won the WBC International Silver Cruiserweight Championship in spectacular fashion last year, stopping Shawn Miller (18-5-1, 7KOs) of Troy, New York, in under three rounds. After securing the title, Rozicki battled Khetag Pliev (5-1-0, 2KOs) in September, winning a dramatic slugfest at the Hamilton Convention Centre. The Bruiser made his first title defense in February against Reznicek, blasting out the Czech hopeful in less than three rounds of work. To date, no man has made it to the fourth round with Rozicki.

Ulrich is unfazed by Rozicki’s recent success. “I have been following and studying the top tier of the WBC boxers my whole life,” explained Ulrich. “Ryan is in the top 20 and I want this fight. Sure he can hit hard, but that’s not all the sport is about. He is in for a long night.”

Three undercard contests have also been confirmed. In welterweight action, “Ruthless” Carolyn Redmond (3-0-0, 2KOs) of Guelph, Ontario, meets Beatriz Jiminez (6-4-1, 1KOs) of Mexico. Jiminez recently stayed the distance with both Kandi Wyatt (10-1-0, 3KOs) and Jessica Camara (7-2-0), making her an important test for the ruthless one. At middleweight, undefeated St. Catherine’s standout Antonio Napolitano (5-0-0, 3KOs) meets once-defeated Hector Hurtado (4-1-0, 4KOs) in a six-rounder. Power puncher Josh Lupia (5-0-0, 5KOs) of Niagara Falls is back against undefeated Bolivian Walter Roca (8-0-0, 6KOs) for six rounds or less at welterweight. An opponent for Bradley “The Truth” Wilcox (9-0-0, 4KOs) of Hamilton will be announced in the coming days.

For fans following from afar, there will be a PPV stream available for purchase. “We have teamed up with a new platform to ensure there will be no further issues,” said Otter. “I apologize for the last PPV stream and we will continue to improve.”