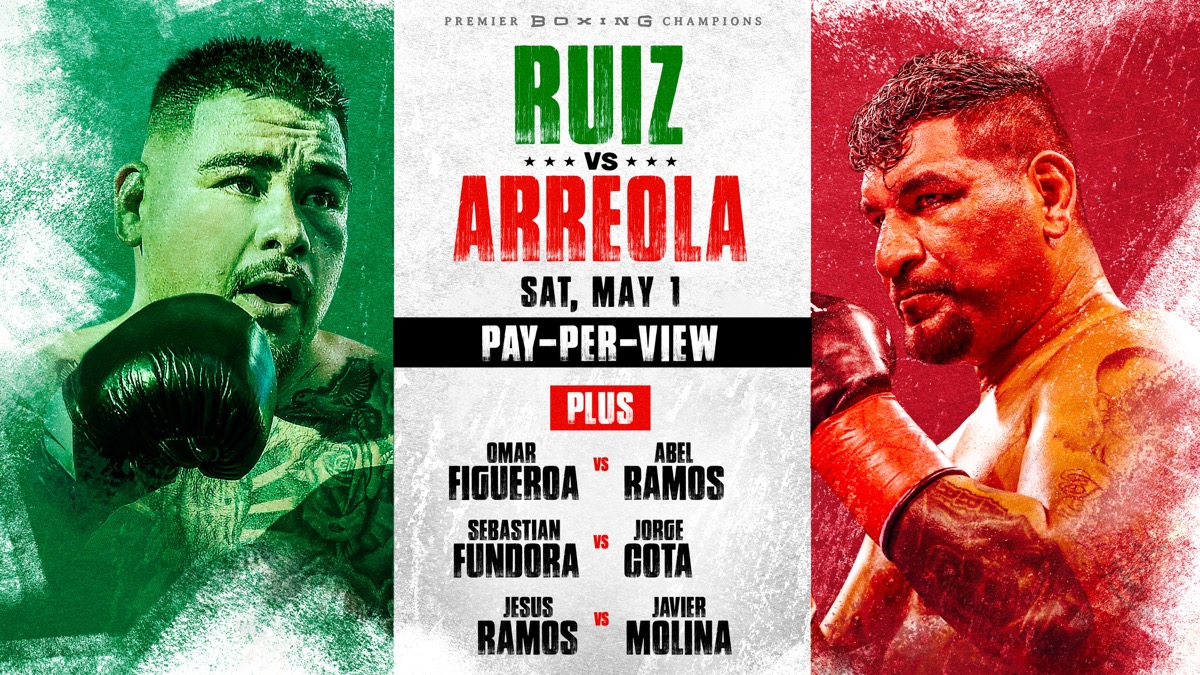 Abel Ramos will step in to face former world champion Omar “Panterita” Figueroa in the co-main event of the pay-per-view. At the same time, Jesús Ramos will battle Javier “El Intocable” Molina in a welterweight attraction that kicks off the pay-per-view at 9 p.m. ET/6 p.m. PT.

Abel and Jesús are trained by Abel’s brother and Jesús’ father, Jesús Ramos Sr. in their hometown of Casa Grande, Arizona. Both have spoken effusively about how training alongside a family member, and a fighter at a different point in their career, help push them during camp.

“It’s great working with Abel,” said Jesús. “We both have the same goal, which is to win on May 1. If I’m ever tired, I look to Abel and know that I have to keep pushing. I’m always able to ask him for advice, and we help each other a lot.”

“It’s great training with a young, hungry fighter like Jesús,” said Abel. “We feed off of each other’s energy, and there’s lots of competitiveness when we train. I think that’s a good thing for both of us.”

Both Abel and Jesús have known since Jesús was little that this was a path the younger Ramos would eventually walk. For Jesús, he’s always used Abel as his inspiration to help get him where he is today.

“Deep down, I always knew he’d get into boxing,” said Abel. “He was at all of my fights when he was younger, and he always showed an interest in the sport.”

“Abel is the guy that I’ve looked up to since I was a little kid,” said Jesús. “I watched him box from a very young age and have learned a lot from him. Seeing him do it has always inspired me. He’s always taken tough fights, and that’s inspiring too. He’s played a huge role in getting me to where I am today.”

While the 20-year-old Jesús is considered a young up-and-comer in the sport, who will be taking on his toughest test May 1 in Javier Molina, Abel believes that his nephew will show wisdom beyond his years in this fight.

“People think because Jesús is young that he doesn’t have experience, but that’s where they’re wrong,” said Abel. “At a very young age, he displayed a lot of the abilities of a veteran fighter. He’s always had great patience, as well as the ability to think in the ring. His ring IQ is really high for his age.”

Ahead of the two fighting Ramos’ sharing the pay-per-view undercard on May 1, here is what Abel and Jesús had to say about their training camp, their respective showdowns, and more:

“We’re less than three weeks away now, and every week I feel stronger and more ready for May 1. I’ve been sparring with a bunch of local fighters from Arizona who are helping prepare me. The hardest part is yet to come, but I’m just focusing on the game plan and executing the same program that’s worked in the past.

“It’s great to be a part of this event and show the fans the warrior mentality that us Mexican and Mexican-American fighters have. I can’t wait to put on a great show! It’s motivating for me to showcase our warrior style, and it’s making me work my absolute hardest to give my best on fight night.

“I learned a lot from facing Yordenis Ugas. I went back and watched that fight, and I saw some things I can improve on. It serves as motivation, but it also showed me that I belong there with the best in the division. I don’t feel like it was a total loss because I learned from it. But in this fight, I’m going to show all the improvements I’ve made since the Ugas fight.

“I watched Figueroa’s fight against Ugas. But styles make fights, and I think my fight against Figueroa will be different from what Figueroa and Ugas had. I expect way more action when I face Omar.

“The majority of the game plan is preparing for Figueroa to come forward. We’re getting sparring partners that mimic what Figueroa does. Even when I’m working on the heavy bag, we’re keeping that in mind. I constantly imagine someone in front of me who I know will throw a lot of punches.

“At the end of the day, I want the win by any means necessary. I love that people are expecting a great fight from us, and I use that as motivation to prepare myself for what I know will be a grudge match.”

“Everything is going how we planned for in this training camp. It’s a grind seven days a week. I’m just keeping up a good diet and focusing on strength and conditioning. We’re going 12 rounds in sparring, and I’m feeling ready. I’m in great shape already, and we still have two and a half weeks to go. I’ve been sparring with my uncle Abel, Jorge Cota, and some other local fighters from Arizona.

“I think Molina has a lot of experience, which I know he’ll try to use against me. He’s a fighter with good speed. But when he fought Jose Pedraza, he struggled against a southpaw. So, I might cause him some problems there, but I’m also bigger than Pedraza. I’m a legit welterweight.

“This fight is so close to Cinco De Mayo; this is a huge deal for me. There will be tons of events and festivities that week and to be a part of all of that is an honor. I want to represent Mexico in the best way that I can.

“A victory over Molina would be a big statement. A lot of people are saying that he’s my toughest opponent to date. And beating him will get me fights with some even bigger names. But I have to beat Molina first.

“I’d love to get a knockout against Molina. He’s faced some tough fighters, and nobody has been able to knock him out. But if I can’t get the knockout, then I want to dominate him and look good getting the win however I can.”