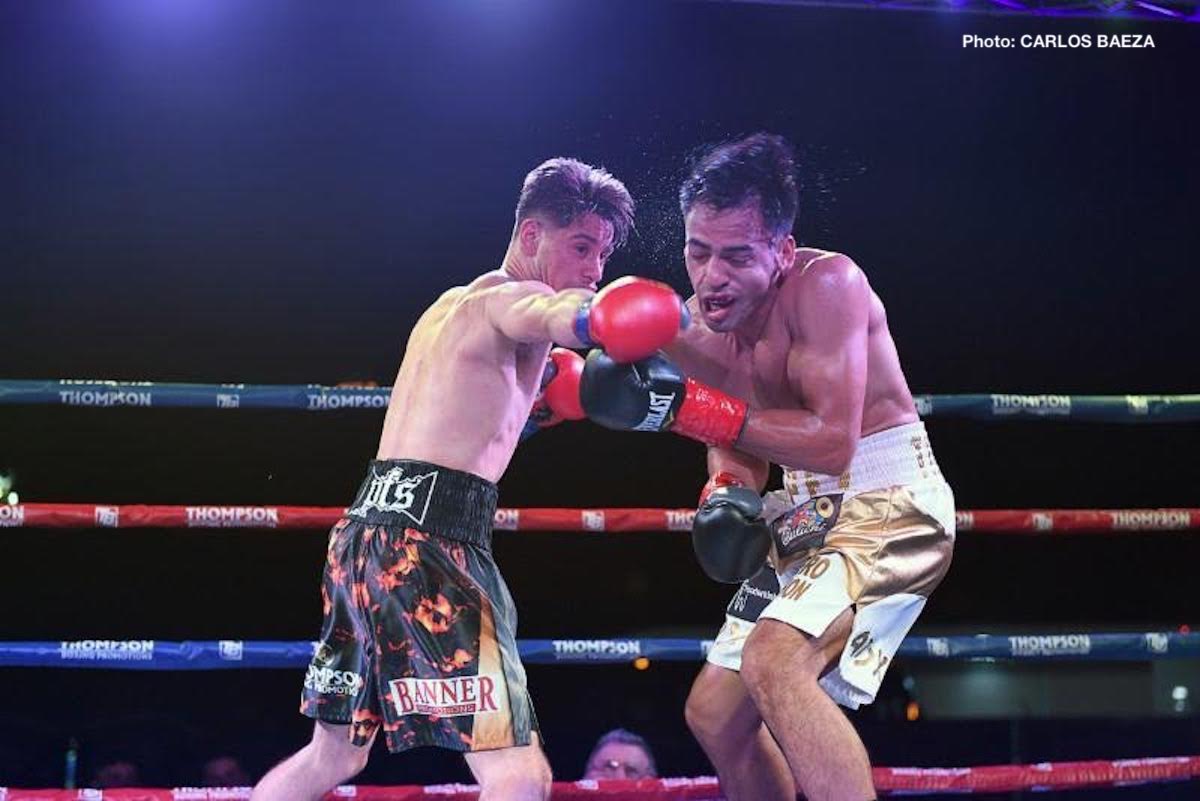 Villa, a southpaw fighting out of Salinas, Calif., showed off his superior skill set to a sold out crowd that witnessed a devastating knockout win.

Throughout the fight, Villa used a sharp jab to set up left uppercuts and straight rights. While most boxers use the jab as a range finder, Villa uses it to inflict pain on his opponent either by landing it, or sending an unexpected power shot to the head or body.

The 21-year-old also found success on the defensive side, limiting Lopez to very few clean looks.

The thrill ride came toward the end of the sixth round when a multi-punch combination floored Lopez. The Mexican fighter would get up, but it would prove a poor decision. Villa promptly unloaded power shot after power shot until referee Edward Collantes put a stop to the carnage at the 2:49 mark.

“I was landing solid punches in every round,” remarked Villa, who is promoted by Thompson Boxing and Banner Promotions. “I knew I would be able to take him out. I wore him down and in the sixth I just let me hands go and I caught him with a lot of heavy punches. I was surprised he got up. He was a tough guy.”

In a stunning upset, LaRon Mitchell (16-1, 14 KOs) suffered the first defeat of his career and lost his heavyweight title at the hands of Rodney Hernandez (11-7-2, 2 KOs) in the “New Blood” co-feature. With the split decision win, Hernandez is now the current Jr. NABF heavyweight champion.

Moreno, who is from Sacramento, was the physically stronger of the two. His punches would often back up the Texas-based Zarazua. Moreno landed clean shots in virtually every round and looked equally comfortable fighting in close quarters.

The fight nearly was stopped when a head butt at the end of the sixth round opened a big cut above Moreno’s left eye. The ringside physician examined the cut and allowed the fight to continue. Moreno used the final two rounds to pad his lead by staying aggressive. Scores: 79-73 twice, 78-74.

Hometown favorite Blake McKernan (9-0, 6 KOs) had a significant fan presence in attendance and used it to his advantage by outpointing Mexico’s Miguel Cubos (11-18, 8 KOs) through six exciting rounds in the cruiserweight division.

The pair had met previously in February with McKernan taking that fight in a points win. McKernan, who is a former U.S. Army infantryman, used consistent pressure, while Cubos scored on the counter attack.

Both fighters showed a dislike for one another at Friday’s weigh in. The disdain carried over to fight night with Cubos actively taunting McKernan throughout the fight. McKernan, however, landed the most telling shots and won comfortably with scores: 58-56, 59-55 twice.

The scores were 59-55 all around for Torres, but the fight was far closer than the results indicated. Torres did excellent work on the inside, but Jumakhonov was plenty active and escaped most of Torres’ heavy shots.

The first round featured a fierce exchange in the middle of the ring with both boxers throwing heavy shots. Becerra clearly dominated the fight with his active punching and took home the unanimous decision win with scores: 60-54, 59-55, 58-56.

Ford managed some nice moments of his own, but it was Bourland that took the initiative from the opening bell. Scores: 39-37, 40-36 twice.

“I’m going to fight my fight,” said Villa, who is from Salinas, Calif. and is a former two-time national Golden Gloves champion. “I put in an excellent training camp just like I always do. I’m ready to carry the show.”

Villa vs. Lopez is the 8-round “New Blood” main event that originates from Omega Products International in Sacramento, Calif. this Saturday, June 30.

In other weights, undefeated heavyweight LaRon Mitchell (16-0, 14 KOs) weighed 238 lbs., while Rodney Hernandez (10-7-2, 2 KOs) checked in at a robust 260 lbs. Mitchell defends his Junior NABF championship for the second time.

“There aren’t going to be any feeling out rounds,” said Mitchell, who is also a full-time physical education teacher in Oakland, Calif. “I’m bringing the heat right from the start.”