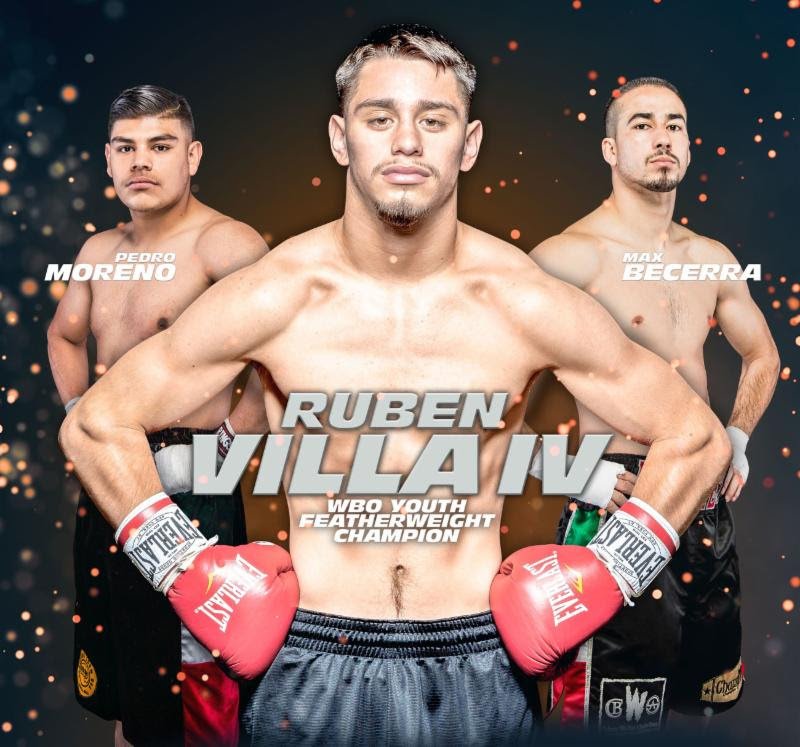 Villa, 21, returns to the Salinas Storm House for the second time this year. The talented southpaw faces Mexico’s Miguel Carrizoza (10-3, 2 KOs) in the 8-round “New Blood” main event.

Villa last fought from the Salinas Storm House in April, when he routed fellow prospect Marlon Olea in route to winning the vacant WBO Youth featherweight championship. It was Villa’s first title since turning professional in July 2016.

The two-time national Golden Gloves winner fights for the fifth time this year after registering six wins in 2017.

“It’s incredible how fast I’ve developed,” said Villa, who is managed by Danny Zamora and trained by Max Garcia. “It feels like it was yesterday that I was in four round fights and now I’m routinely headlining shows.”

The lefty, who sometimes conducts training camps in the sparring rich city of Riverside, Calif., decided to stay close to home for this fight. Him and his team have zeroed in on what is required to defeat Carrizoza.

“He fought my stablemate, Michael Dutchover [undefeated junior lightweight], last year so Mike gave me a pretty detailed scouting report on him,” Villa said. “He’s a bruiser. He likes to come forward and get you onto the ropes or just backpedaling. I know how to fight guys like that. I’ve fought against guys like that before and I’ve seen a bunch of them in previous training camps. We are really comfortable in our game plan.”

Moreno, 21, is stepping up in class by facing the more experienced Martinez.

“I think it will be the toughest fight of my career,” said Moreno, who signed with Thompson Boxing in March. “Martinez has a lot of fights under his belt so he knows how to compete against a lot of different styles. I need to make a statement early. I can’t let him get comfortable and develop any kind of momentum. It’s going to be a fun fight to watch.”

Leading the “New Blood” undercard is junior welterweight Max Becerra (15-2-2, 8 KOs) of Sacramento. Becerra will fight an opponent to be named later (6-rounds).