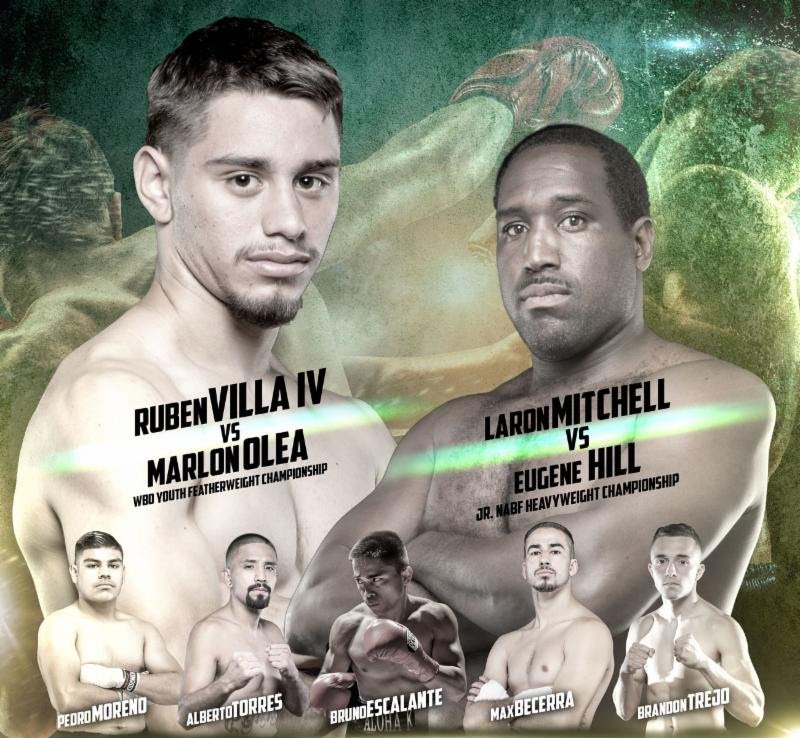 Thompson Boxing promotes its first show in the Northern California city of Salinas on Saturday, April 14, from the popular Salinas Storm House.

“This show has been in the works for more than a year,” said Alex Camponovo, who as matchmaker and general manager of Thompson Boxing is credited with expanding the company’s promotional reach. “It’s an excellent show from top-to-bottom featuring talent from all over the Bay Area and surrounding parts. You have Ruben looking to win his first professional title [WBO Youth] in his hometown, and LaRon defending his Jr. NABF crown for the second time. Plus a host of prospects that are eager to build their name.”

Villa, 20, will be locked in a battle with fellow prospect Marlon Olea (13-2, 12 KOs) of Colombia in the 8-round “New Blood” main event where the WBO Youth Featherweight Title is up for grabs. Villa, a southpaw, is currently in Riverside, Calif. with trainer Max Garcia preparing for his main event debut.

“I’m excited to headline my first event,” said Villa, who is co-promoted by Thompson Boxing and Banner Promotions. “I’ve been preparing for this my whole life. It came fast. There’s a lot to be happy about. It’s a title fight and it will be in front of my hometown fans.”

Villa will certainly receive a challenge from Olea. He holds a unanimous decision loss against WBA world champion Danny Roman and is known as a pressure fighter with excellent instincts.

“He’s a mover and he’s quick with his hands,” Villa said. “I’ll be ready for him. We are getting a little bit of everything in this training camp. I’m sparring guys that like to box and guys that are coming in and pressuring.”

New to Villa for this fight has been the abundance of ticket requests from local boxing fans. The former two-time Golden Gloves champion has already sold 400 tickets, yet the requests keep pouring in.

“To be honest, I’m not sure how it’s going to feel to fight in my hometown,” Villa said. “I tend to tune out all the white noise and just box. I’m sure there will be some moments when I recognize the crowd. I have to enjoy it, but keep my poise.”

In the 8-round co-feature, Mitchell aims for a second successful Jr. NABF title defense against the veteran and once-beaten Eugene Hill (34-1, 22 KOs) of Galveston, Tex. Mitchell, who is a full-time physical education teacher at St. Elizabeth’s in Oakland, Calif., is making his first start of the year.

“I’m hungry to get back in the ring,” Mitchell said. “I’m going to have a lot of friends and family in attendance. Most of them haven’t seen me fight in person and I’m defending my title so there’s a lot at stake.”

Also on the card, Bay Area native Bruno Escalante (16-3-1, 7 KOs) faces an opponent to be named later. The 8-round bout will be contested in the bantamweight division.