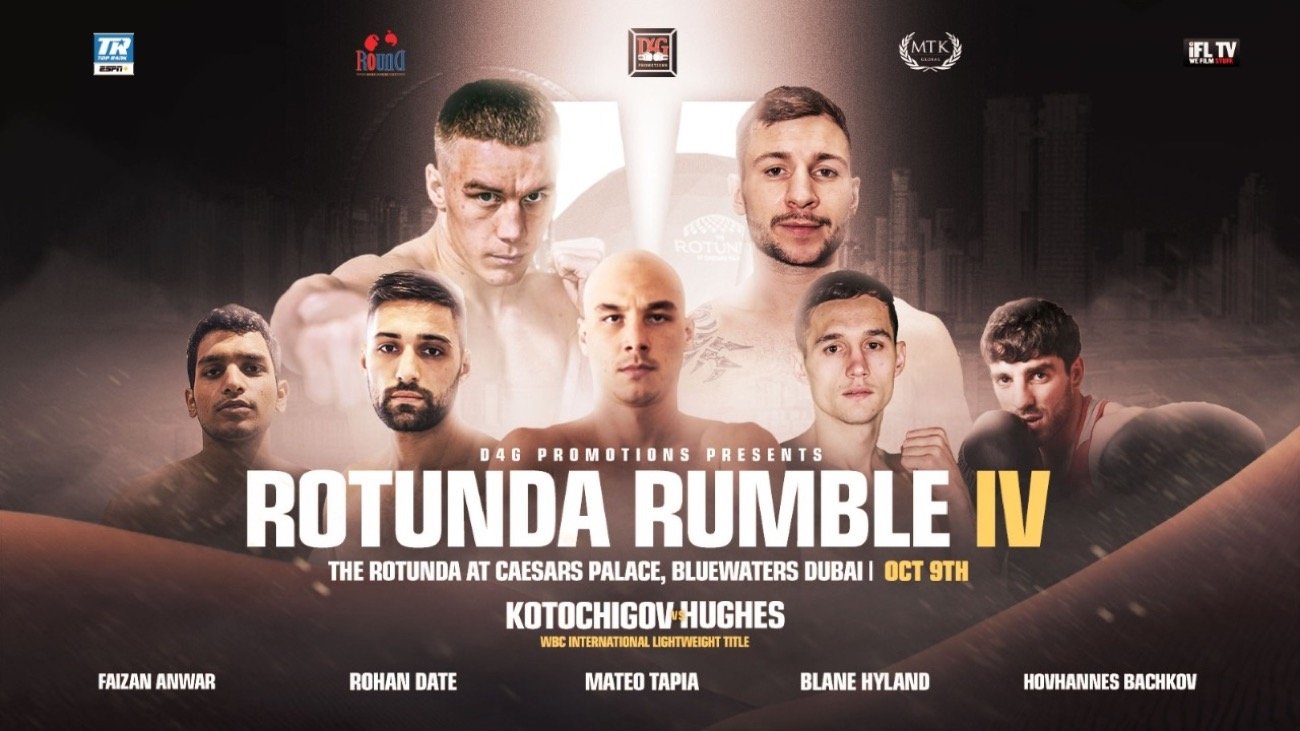 Unbeaten Kazakh star Viktor Kotochigov is relishing the difficult task ahead of him as he prepares to take on Maxi Hughes on Friday’s huge #RotundaRumble4 event.

Kotochigov (12-0, 5 KOs) defends his WBC International lightweight title against Hughes (21-5-2, 4 KOs) on the huge D4G Promotions event in association with Round 10 Boxing and MTK Global at Caesars Bluewaters Dubai, live on ESPN+ and IFL TV.

It looks set to be the toughest test of Kotochigov’s career so far, but he’s determined to get a win here and move on to even bigger fights in the future.

Kotochigov said: “The upcoming fight is a real test for me. The opponent is very serious with a good record, and he beat Jono Carroll in his last fight, so I have had to train hard.

“I’ve watched him, and he is a cunning boxing who is technical, and I’m sure we will have a good fight. Title fights are probably the biggest motivation that keeps me in this sport. This is my goal and I will continue to achieve it.

“I am looking forward to the fight in Dubai, and I am sure it will be a great show. I want to win this fight, and then get the opportunity to fight with more great boxers in the future.”

Maxi Hughes is still on cloud nine after his win over Jono Carroll – and he plans to keep the momentum going by earning another massive victory against Viktor Kotochigov on next month’s action-packed #RotundaRumble card.

The must-see D4G Promotions event takes place at The Rotunda at Caesars Bluewaters Dubai on October 9 in association with Round 10 Boxing and MTK Global – and will be broadcast live in the US on ESPN+ in association with Top Rank, and worldwide on IFL TV.

Hughes (21-5-2, 4 KOs) challenges Kotochigov (12-0, 5 KOs) for his WBC International lightweight title at the event, and the Yorkshire hero is confident his career resurgence will continue.

Hughes said: “It’s great to be straight back into another big fight only eight weeks after the Jono Carrol fight. Fighting regular will bring the best out of me. I stayed in the gym, kept sharp and kept improving.

“After watching the fight with Jono back I’m generally happy with it, but there were still loads of things I could have done better. Although the fight was a clear enough win, I feel I could have been more clinical, but I suppose that’s all part of developing your craft.

“It’s amazing what one good win can do for your career. Five weeks ago I was brought in as an opponent, and now I’m topping the bill in Dubai fighting for the WBC International title. I’ll just keep the momentum going and keep knocking doors down.”

Hughes: Kotochigov is nothing new to me

Maxi Hughes believes he already has the upper hand on Viktor Kotochigov ahead of their WBC International lightweight title showdown on on Friday’s huge #RotundaRumble4 event.

Yorkshire hero Hughes (21-5-2, 4 KOs) challenges unbeaten Kazakh Kotochigov (12-0, 5 KOs) for the belt on the action-packed D4G Promotions event in association with Round 10 Boxing and MTK Global at Caesars Bluewaters Dubai, live on ESPN+ and IFL TV.

Hughes heads into the fight on the back of his incredible win over former world title challenger Jono Carroll in August, and he believes Kotochigov is just another step on his journey to challenging for a world title.

Hughes said: “I’ve had a look at a few of his fights, and he’s nothing I’ve not seen before. He’s a tough, strong, come forward fighter, but I’ve got more experience at a higher level which gives me the upper hand.

“The WBC International title is a massive incentive. Winning this belt should give me a top 15 world ranking with the WBC and put me a step closer to challenging for a world championship.

“Fighting abroad ticks an item off my bucket list. It’s something I’ve always wanted to do and what a country to fight in. It will be great to be away in the sunshine with the dark nights drawing in this time of year.

“Training hasn’t stopped since my last fight. I was on such a high so I just wanted to make sure I kept improving, and before I knew it I had another fight date.”

Amateur superstar Hovhannes Bachkov faces an extremely dangerous challenge in his professional debut on Friday – as he prepares to take on 22-6 opponent Samuel Gonzalez on the huge #RotundaRumble4 event.

The two men meet on the action-packed D4G Promotions card in association with Round 10 Boxing and MTK Global at Caesars Bluewaters Dubai, live on ESPN+ and IFL TV.

He also represented his country at the 2016 Olympics in Rio, and he’s relishing the opportunity to make his debut against a tough opponent with an impressive winning record.

Bachkov said: “A strong rival is a good one. If you want the whole world to know who you are, you must start your career with a strong rival and then do your talking in the ring.

“I don’t like to talk much before a fight, but I will look spectacular in my fight. This is my first fight as a professional and I am ready to make an impact.

“Throughout my career I have always trained as a professional, but there has been a new approach. I’ve worked hard in training and I am extremely excited.

“Making my professional debut has been a dream of mine for a while, and I’m determined to make it a dream to remember this week.”