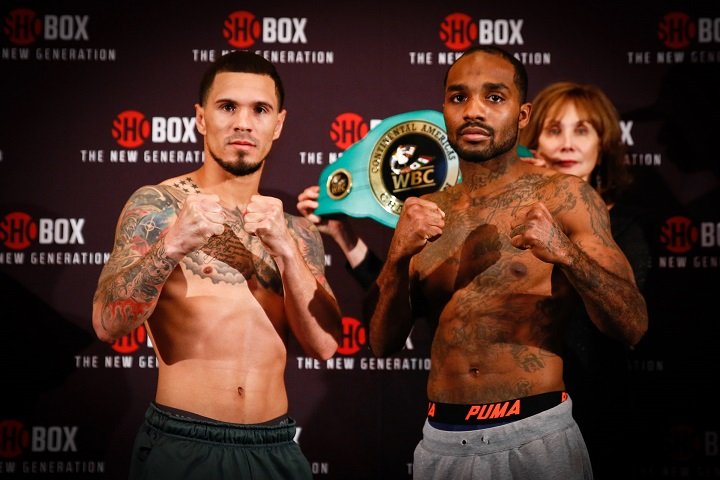 SHOWTIME Boxing fans will get their first look at eight promising prospects with a combined record of 97-2 – including two undefeated up-and-coming heavyweights and a 2016 Super Welterweight Olympian – as ShoBox: The New Generation takes place this Friday, November 10 live on SHOWTIME (10 p.m. ET/PT) from The Masonic at Templelive Cleveland.

Tickets for the DiBella Entertainment event are still available for purchase via the following link HERE.

“There was a time in my career when I was one fight away from fighting for a world title at 122 pounds, but I’m a natural featherweight. This fight is at 126 but I’ll fight at 126 or 122. Wherever the opportunity is, I’ll take it.

“I’m going to show a lot of different things. I have more to show than just my boxing skills. Whatever I have to do to get the win, I will do it.

“My opponent is a southpaw, but he’s not the slickest southpaw I’ve seen. We’ve been training with a lot of southpaws. Fighting southpaws is not a big deal for me. I fought so many of them in the amateurs.

“I don’t think I’m going to have any problem with him. I know his left hook is his favorite punch so I’m going to try and take that away from him.

“I think putting together some timely combinations is going to be the key to this fight.

“After I beat [Jorge] Diaz and [Luis] Del Valle in 2015 my opposition dropped. I was knocking on the door but just never got the call. That’s why this fight is so big for me. I’m ready to showcase my skills on national TV. I’m ready for the next step on my career.”

“It took me awhile from me to come back after the loss to Javier Fortuna [in 2012]. But I’ve always stayed sharp and I’ve been in various camps. I’ve trained with guys like Lamont Peterson, Gervonta Davis and Rau’Shee Warren.

“I’ve been doing this since I was 10 years old, but I’m a lot wiser and smarter than in the past. I have knowledge and have been talking to a lot of managers and champions. I’m like an Einstein now. I’m a lot sharper, and craftier. And I have defense now.

“This fight will show the boxing world that I belong. I can be in the top five. This fight means a lot for me and the people of Cleveland.

“I’ve been working with [famed trainer] Barry Hunter for this fight and he’s taught me so much. My opponent has been spoiled and has never had to travel into enemy territory. Until now.

I’ve been a road warrior my entire career. I know the crowd can win the fight for me. Just the energy and hearing them when I’m tired. It’s a big advantage for me to be fighting at home. I will have a lot of fans here and it’s going to be big. I still got guys’ texting me for ringside seats, but there’s none left.

“I want ShoBox to say, ‘We have to have this guy back. We have to go back to Cleveland.’ ”

“They call me ‘Money Shot’ and ‘Southpaw Machine’ and the ‘Black Mexican’ in the gyms here in Cleveland.”

“I’ve been training with Ruben Guerrero for the past couple of weeks, and I like training a lot better here in the United States. I felt like I was mistreated in the past back in Colombia.

“Fellow Colombian Oscar Escandon introduced me to Ruben and here we are. It’s the United States and everyone wants to be over here. The sparring and the training is just so much better here.

“I’m 30 years old now and I have a family back home in Colombia to support. This is my shot. I will not fail them. I have Team Guerrero on my side so I’m ready.

“We all know skills pay the bills and I just have to do my job and not get too crazy in there and get the win.

“I watched Muhammad Ali and Sugar Ray Leonard when I was younger. I liked how smart and intelligent they fought.”

“I’ve been in the United States for a year now and really liked training at Wild Card Gym and Wild Card West in Southern California.

“I can punch as hard as [Gennady] Golovkin and can move better than [Vasyl] Lomachenko. I’m very confident and my experience is the reason for that.

“I sparred with Demetrius Andrade and Shawn Porter and I have held my own.

“The welterweight division is the best in boxing, everyone knows that. And I’ll fight anybody.

“It doesn’t matter that there’s no YouTube video on Gonzalez. He’s tough and competitive and a boxer who will come to fight.”

“When I beat Joseph Parker [in the amateurs twice] it was my movement and my footwork that was key. He’s such a big puncher I just kept moving because I didn’t want to stand right in front of that.

“I’m a multi-dimensional fighter and my strengths are my mobility.

“Deontay Wilder showed that he has plenty of power. He’s always there from the first bell… I like the guy, he’s got plenty of power and is very explosive.

“I like Anthony Joshua’s boxing brain. He’s got power, but it’s a different kind of power from Wilder. I like the way he sees his punches.

“For myself to be known, I’ll definitely have to fight in America. I don’t think I can make too much of a statement being back home in New Zealand.

“I think I can be three to four fights away for the chance at a world heavyweight title. I have to be entertaining in this fight for the American people to get to know me.

“Boxing used to be the biggest thing in New Zealand, but then rugby blew up.

“I live 40 minutes from Joseph Parker but we’ve never sparred. It’s too competitive.”

“This is my first time on national TV so I’m excited and nervous.

“He’s taller, but I feel like I’m just as long as he is. I can put my head in his chest and go to war. If it’s going to be a dog fight I’ll get into his chest.

“Yeah, I’ve watched both the heavyweight world champs. I’d beat Joshua now. Wilder, I would have to get serious sparring in. I’d have to change everything I do in my life – the way I train and my lifestyle and everything. Deontay’s the man right now. Joshua burns out after six rounds and that’s why I’d beat Joshua now. I’m two years away from those guys. Tomorrow night is my first step.

“Boxing’s coming back in Pittsburgh and we’ve got two or three other heavyweights there that are popular right now.”

“When you have a good crowd around you, you know it hypes you up.

“I was the youngest member of the 2016 Olympic team at age 18. It was cool being in high school and making the Olympic team.

“I’m very tenacious and determined, that’s why I’ve been successful so far in my young pro career.

“There’s no rush for me. People want to see me, sure. But there’s no reason to move fast at this point.

I think the competitiveness of boxing is what drives me. Sure the money and the fame are going to be great, but I just love everything about this sport.”

“I haven’t surprised myself when I’ve beaten undefeated fighters.

“I’m an awkward fighter, in a good way. My angles I learned when I was fighting in MMA.

“The risk and the reward wasn’t worth it [to continue] in MMA. I was making a couple hundred bucks and getting elbows to the face. It just wasn’t worth it.

“Conwell is good and aggressive and I’ve seen him on YouTube. He comes forward and he looks to put you down.

“I just feel so much more comfortable in a boxing ring. I was good at take-downs.

“Conor McGregor went 10 rounds with Floyd [Mayweather] and he got paid, so good for him. I’m one of the few guys who have been able to do both MMA and box professionally.”