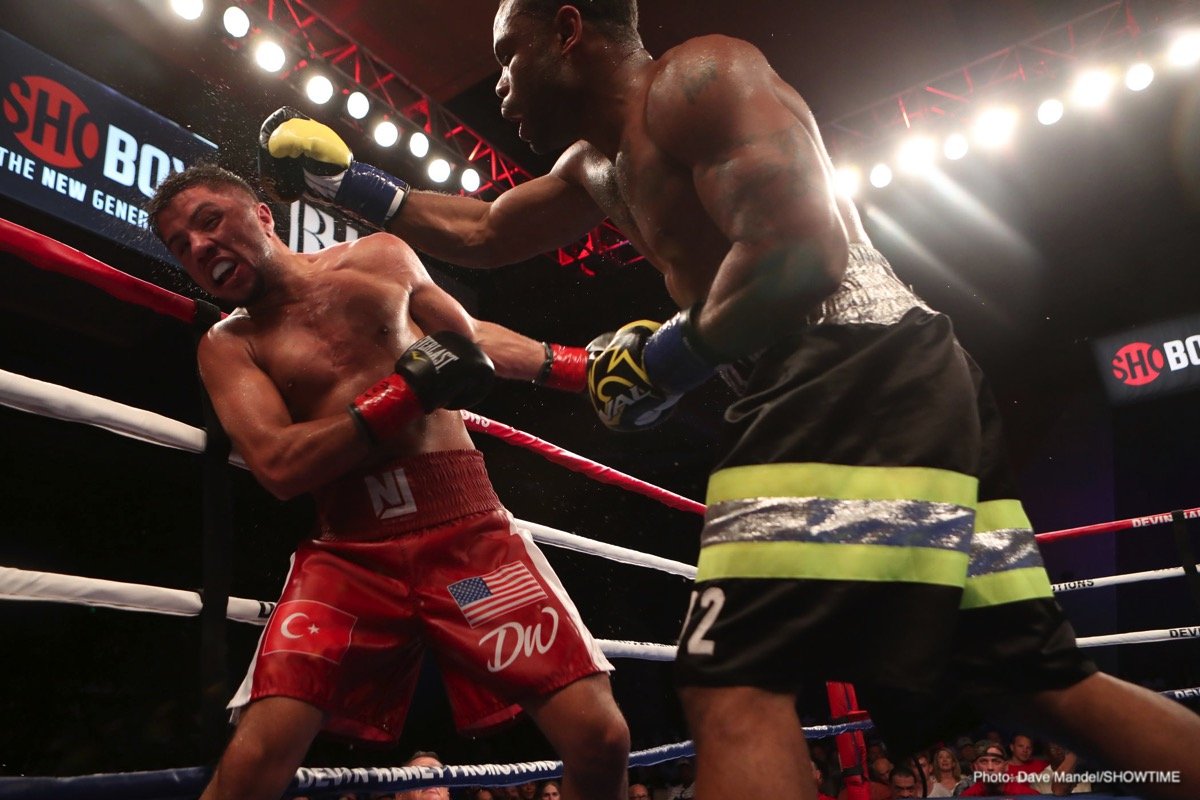 Four members of the GH3 Promotions stable will be in action on Friday, February 1 at The Main Street Armory in Rochester, N.Y.

In the main event, undefeated super middleweight prospect Ronald Ellis returns to ShoBox: The New Generation against DeAndre Ware in the 10-round featured bout live on SHOWTIME at 10 p.m. ET/PT.

The 29-year-old Ellis, originally from Lynn, Mass., returns for his fourth ShoBox appearance as he seeks a statement win following a controversial draw in his last outing on the series.

The 28 year-old Mattice is a five year-professional, who has scored quality wins over Eliseo Cruz Sesma (9-2-1) and Rolando Chinea (15-1-1). Mattice is coming off two exciting fights with Zhora Hamazaryan, both of which aired on ShoBox. The first encounter saw Mattice win a split decision, while in rematch they fought to an eight-round draw on September 28.

Lozano of Argentina has an impressive mark of 18-1-1 with nine knockouts.

The 24-year-old Lozano is a six-year professional and is riding an 11-fight unbeaten streak. Lozano, who will be making his American debut, is coming off a second round stoppage over Damian Guzman on December 8 in Argentina.

The 28-year-old Wade is a 10 year-professional who has quality wins over Chris Davis (3-0), Michael Faulk (2-0), Grover Young (4-0), Nick Brinson (16-1-2) and former world champion Sam Soliman. This will be Wade’s first ring appearance since losing to unified world middleweight champion Gennady Golovkin on April 23, 2016.

Hines, of Cleveland, Ohio, has been perfect in his young campaign by sporting a record of 3-0 with three knockouts.

The 23-year-old, scored those three knockouts in a three week period, with the latest being a first round stoppage over Jacob Hagler on August 11 in Salisbury, North Carolina.

“This will be a big night for GH3 Promotions,” said GH3 Promotions CEO, Vito Mielnicki. “Ronald Ellis will take another step towards being a top contender in the super middleweight division. Mattice has established himself as an exciting fighter, and he is fighting a tough guy. Should he come out victorious, he will be back in a television fight in the spring. Wade is a guy who established himself as a legitimate contender. He needs a couple of fights, and he will be in a major fight in 2019.”

Undefeated super middleweight prospect Ronald Ellis returns to ShoBox: The New Generation seeking a statement win against DeAndre Ware in the 10-round main event of a three-fight telecast on Friday, February 1 live on SHOWTIME from Main Street Armory in Rochester, N.Y.

The first of two February editions of the prospect developmental series will feature six fighters with a combined 89 wins against just three losses. The series returns just two weeks later on February 15 with a focus on the heavyweight division.

In the opening bout of the telecast, former No. 1-ranked U.S. amateur Abraham Nova (12-0, 10 KOs) will face fellow-unbeaten Oluwaseun Joshua Wahab (18-0, 11 KOs), of Ghana, in an eight-round super featherweight bout.

The 29-year-old Ellis, originally from Lynn, Mass., returns for his fourth ShoBox appearance as he seeks a statement win following a controversial draw in his last outing on the series. The former National Golden Gloves Gold Medalist out-boxed Junior Younan last February in a fight many observers thought he deserved to win. Still undefeated, Ellis returns as he looks to prove he has what it takes to turn from prospect to contender.

“I need to make a statement,” said Ellis, who upset highly regarded Terrell Gausha to win the 2010 National Golden Gloves. “The last time I was on ShoBox I got a draw. This is the perfect opportunity for me to show I have what it takes. Ware won’t run – he comes at you, he roughs you up, and he’ll be right there for me to hit. I know what I am up against. I have been working hard, training in different camps and approaching this as the biggest fight of my life. I appreciate SHOWTIME for giving me another opportunity to prove I’m ready for the big show.”

The fan-friendly Ware suffered the first loss of his career last September in a close and entertaining brawl with Cem Kilic on ShoBox. The 2013 National Golden Gloves Bronze Medalist will look to return to the win column as he faces his third consecutive unbeaten opponent. The 30-year-old’s career-best victory came last year over 2012 Olympian and previously undefeated prospect Enrique Collazo. A former collegiate football player at the University of Toledo, Ware also works fulltime as a firefighter in his hometown of Toledo.

“My last time out on ShoBox was great, but unfortunately I didn’t come out victorious,” Ware said. “This time I’m looking to come out with my arm raised at the end of the fight. Ronald Ellis is a tough fighter, and I commend and respect anyone who steps in that square circle. I know a win against a tough, undefeated guy is what I need to get me on track to winning a world title. I see big things happening for me after a win like this. The sky is the limit after this win.”

The 20-year-old Yoon, who was born and raised in Honolulu, went 100-11 as an amateur before turning professional in 2016. Gifted with one-punch power, Yoon started his career with 10 straight knockouts before earning a unanimous decision over former world champion Juan Carlos Salgado in just his 11th professional fight. Yoon fought five times in 2018, and his level of opposition has steadily increased as he has gained experience.

“This is a great opportunity to show the world what I already know – that I’m one of the best young fighters in the game,” Yoon said. “A win at this point of my career will open up new doors and will get me one step closer to where I want to be. We’re studying our opponent and putting a plan together for February 1. It will be my job to execute it.”

Zamora hails from Matehuala, San Luis Potosí, Mexico, where he compiled an amateur record of 60 wins against just four losses. The 25-year-old won the silver medal at the Mexican National Amateur Championships before turning professional in 2012. Zamora has fought his entire career in Mexico and will make his U.S. debut on February 1. He has won five straight since a 2017 loss to Antonio Moran, who recently dropped a close decision to Jose Pedraza.

“This will be my first fight in America and I’m thrilled that it will be on ShoBox,” Zamora said. “I will win this for my parents that sacrificed a lot for me and for my wife and son – I can’t let them down. I am coming to win and to show everybody that Mexico will always produce proud champions.”

Born in Puerto Rico, the 24-year-old Nova fought as an amateur in the U.S. where he compiled a stellar record of 167-11. Nova, who fights out of Albany, N.Y., was the No. 1 ranked 141-pound fighter in the United States and won gold at the 2014 U.S. National Boxing Championships. He turned professional in 2016 shortly after losing a close decision in the Olympic Trials to Gary Antuanne Russell. The hard-hitting super featherweight picked up five wins in 2018 and will face just his second undefeated opponent on February 1.

“I’m looking forward to making my ShoBox debut and the fact that it’s in Upstate New York makes it even more special,” Nova said. “I’ll have many of my friends, family and fans in attendance, so I plan on making a statement. You don’t want to miss it.”

Wahab was born in Nigeria but fought as an amateur for Ghana, where he was a three-time national amateur champion. He has fought his entire professional career in Africa, where he has already been in five-scheduled 12 round fights. The 28-year-old Wahab is mentored by Ghanaian great Azumah Nelson, who is widely considered the greatest African boxer of all time.

“In all honesty, I’ve watched his fights, and I respect all fighters, but Nova hasn’t seen a fighter like me yet,” Wahab said. “I’ll be leaving New York undefeated.”

Tickets for the live event, which is promoted by GH3 Promotions in association with Greg Cohen Promotions, are priced at $100 for VIP Ringside, $50 for Preferred Seating, $30 for General Admission and $2,000 for VIP Tables. Tickets can be purchased by calling 585-232-3221.