The media workout also featured two-division world champion Erislandy “The American Dream” Lara, who defends his WBA Middleweight Title against Gary “Spike” O’Sullivan in the co-main event, and unbeaten rising star Jesus “Mono” Ramos, who battles Luke Santamaria in a 10-round duel on the pay-per-view.

In addition, super welterweight contender Luis “Cuba” Arias worked out for media ahead of his bout on the undercard lineup on May 28.

The live event tickets, which are promoted by Mayweather, GTD, and TGB Promotions, are on sale now and can be purchased through seatgeek.com and barclayscenter.com. Tickets are also available for purchase at the American Express Box Office at Barclays Center.

Here is what the workout participants had to say Tuesday from Mayweather Boxing Club:

“He will get knocked out by the first punch that he eats. He’s going to run right into something.

“I always feel good every time I’m going into a fight. I don’t like ‘Tank’ as a person, and I believe he will get whupped in this fight.

“He ducked me twice for sparring, and the bad blood has been there ever since. I’ve been calling him out since 2017. The only reason this fight was made was that I wanted it. He doesn’t want this. He wishes he was fighting some 126 or 122-pounder.

“I just saw a bunch of nervous energy from Gervonta when we faced off. He didn’t say anything to me. He doesn’t even believe he’s going to knock me out.

“Tell me one fight where he hasn’t gotten punched on by smaller dudes with no power? I’m way more accurate than anyone he’s ever fought. I’m way more substantial and more explosive. It’s just common sense, and he’s getting knocked out.

“I thought Isaac Cruz beat Gervonta. That fight showed just how vulnerable he is. He’s scared of people that can crack.

“Having Joel Casamayor in my camp is excellent. Watching him because he’s a slick southpaw has taught me a lot. He’s helped me with my movement and my accuracy and he’s watched me knock a lot of people out ever since the amateurs.

“I don’t have any message for Davis; I just have these fists.”

“I’m excited to be fighting back in Brooklyn again. I’ve had a lot of success in New York and it’s going to be fun being on a big PPV event like this with Gervonta Davis.

“I have a great relationship with my training partners, including Luis Arias. We’ve had a great camp and pushed each other day after day.

“I feel strong at 160 pounds. I showed that in my last fight and I’ll show it again in this fight. I’m ready to display all of my skills once again.

“Come May 28, and when I come out victorious, I’m ready to fight the best in the division. I’m not even going to mention their names because I’m tired of doing that. I’m just focused on getting in the ring with all the best fighters.

“People avoid me at 160 pounds just like they did at 154. I’m a tough matchup for anyone out there. That’s why they don’t want to fight me.

“I’m going to come out focused and do what I know how to do on fight night. Most importantly, I’ll leave the ring with my hand raised.

“I couldn’t tell you how O’Sullivan fights; that’s something I leave to my coaches. I’m just working to be at my best and show everyone what I can do on May 28.”

“Everything is excellent with training camp. I feel ready. We added Larry Wade as our strength and conditioning coach, so our team is growing. Little by little, we’re getting better and better.

“It’s fair to say that I’ve never been in better shape. I feel strong and ready for whatever Luke Santamaria brings on fight night.

“It was a close fight, but I don’t think Santamaria beat my uncle Abel Ramos in their fight in February. Santamaria was hurt a few times, but it is what it is. I feel like he’s got false confidence coming into this fight because of that. I don’t think that’s going to help him at all.

“My mom and dad argue about who I get my power from. I guess it’s just something that comes naturally to me.

“This is a big card that everyone is looking forward to. It’s a great privilege to me and I’m not taking it lightly. I’m coming at my best, and I’m coming to perform.

“I have to make a big statement and show the whole division that I’m here to stay. That win over Vladimir Hernandez will lead to bigger things, and that’s what I need to show next Saturday.”

“I’m just happy to be part of this great event. I want to thank Mayweather Promotions for continuing to believe in me. After the Jarrett Hurd fight, I moved to Las Vegas and connected with Ismael Salas. I’ve been training with Lara at Salas’ gym, and we just got done sparring.

“Camp has been excellent. The work has been tremendous, and the rounds I’ve gotten in have been grand. I’m sparring with Jessie Vargas and Erislandy Lara, and that work will show.

“I feel young in the ring. I’ve had layoffs throughout my career. I feel better and better fight after fight. The more rounds I go, the easier it is for me. I would say I’m young but well-seasoned. I’m going to be ready when my title fight comes.

“I’ve been calling out Tony Harrison since I beat Hurd. I’m right there for a world title shot if I hit another former champion. That makes the most sense for both of us. Let’s give the fight fans what they want.

“None of the top 154 pounders have a better resume than me. I’ve had my setbacks, but I’m right there.”

“Romero has been asking me for this fight for years. Every time he sees me, he asks about ‘Tank.’ Now is his opportunity. We’re close to the fight, and I’m expecting a terrific contest.

“This is a difficult fight for both guys. ‘Tank’ is one of the best fighters in the world right now. He’s very slick and has tremendous skills that he hasn’t even been able to display fully. Everyone knows he’s a great puncher. When you look at Romero, he’s an awkward fighter, which can work to his advantage. I’ve seen a lot of clumsy soldiers have great success.

“It’s hard to prepare for guys who don’t have traditional styles. This will be a very entertaining fight, and I expect this one to end in a knockout.

“‘ Tank’ is a big-time attraction, and everyone wants to come out and see him fight. Any fight that he’s involved with is a big fight.” 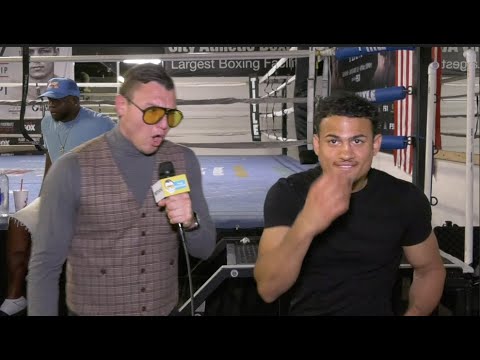