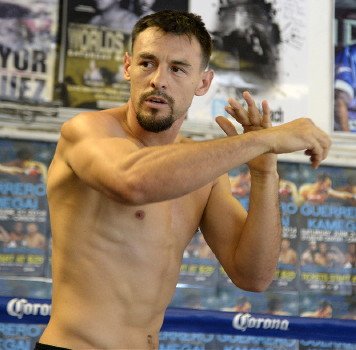 Below is what the fighters and Oscar De La Hoya, President of Golden Boy Promotions, said at Wednesday’s workout:

“Training camp went great. I feel fresh and I can’t wait to get out there. The time off felt good, I was able to recuperate my body and spend time with my family. There were a couple of things going on that kept me out of the ring but it’s now time to take care of business.

“I was able to incorporate CrossFit into my training regime and it made me able to get up to my optimal 147-pound weight. Before that I had trouble even trying to make weight.

“If I take care of business I would of course like to fight Floyd Mayweather; everyone would like that fight. I felt like I could give a lot more and I am excited to showcase everything that I have been doing to prove that I can hang with a fighter like Mayweather. Floyd is a pretty smart fighter but I can stay on my boxing game now, be a smarter fighter and walk guys down.

“I plan on providing an action-packed fight. Kamegai comes to fight and you know I always come to fight, so it should be very exciting. I look forward to showcasing a lot of stuff that I’ve been working on and put on a great show for the fans.”

“I’m from Japan, and we respect everybody outside the ring. There is no trash-talk. In Japan, we think of Robert Guerrero as a multi-division world champion who fought Floyd Mayweather. That said, I didn’t fly all the way across the ocean to lose. I came here to not just win the fight but to have a decisive victory.

“I’m very confident and I feel I’m acclimated. I’ve been in America about 10 days. What I’ve worked on most since arriving is a way to avoid all his holding tactics and a way to keep him from being able to fight from long range.

“This is a very important fight and a tremendous opportunity for me. Not a lot of people know me now, but they will after the fight.”

“You always have to be careful no matter who you are competing against, I never overlook anybody. You must have a level of defensive discipline. As far as him in general, we’re ready; I don’t believe he has what it takes to win this fight. He’s not a volume puncher; he tries to be more accurate. Even if he tries to outbox me he doesn’t have the hand speed and boxing ability to make it a tough fight. I am overall physically bigger and stronger and it won’t be a good thing for him. He is most definitely a stepping stone for me. The objective is to get out of the ring with a victory; we never look at the venue or anything where my focus shouldn’t be on. I will look good and expose this guy.

“It doesn’t matter who I’m fighting, I come to win. Everything is in my favor in this fight in terms of the speed, power and general fight charisma and we will exploit that on Saturday. This guy is just not on my level.

“Every fighter I fight is a learning experience, you look at my fights now and you can see the maturity level from when I was 8-0, 10-0.

“A lot of these fighters are one-dimensional. There are good boxers with no inside game. When it comes to me, what makes me a lot better than the other fighters is how versatile I am in the ring. You can see me walk these guys down or turn the fight into a brawl. With each style that we adapt to, we have the same level of creativity and that is what sets us apart.”

“I’m excited and looking forward to Saturday but, for me, I go into the ring thinking the same thing before every fight, and that’s I want to win.

“Gary Russell is much faster than me. He’s a very quick, speedy fighter, and I won’t know until we get into the ring how I plan to deal with it. But we’ll find out soon enough.

“I fought really fast guys in the amateurs but those were only three-round fights so I didn’t have time to try and figure out the style of who I was fighting.

“It’s not easy to talk about myself. I’m not sure how I would describe my style. I would much rather practice then talk, I’ll let the experts describe how I fight.

“I got good experience from my two professional fights. I came on the last half of my first fight so I think my stamina and conditioning is good. But every fight is different so we’ll have to see how it goes on Saturday.

“I expect a good fight on Saturday and I expect to win.”

“Nobody likes to lose, but you have to take some licks across the head to get to where you need to be. I hope that this will be the last lick I will take across the head.

“I would love a rematch with Shawn Porter. I know my skills and technique are way better than his, but we will see what happens. I don’t want to talk past this fight.

“I want to fight all the elite fighters; I never want to duck anyone. I am looking to make a statement in this fight; you are only as good as your last fight, so I plan on making a statement.

“On the night of the fight you will see a mix of everything — power, speed, legs and I will show everyone why I am the former world champion.

“When you are a competitor you want to win all the time and be at the top. When I see these fights on TV, I get anxious because I know my skills are good and that I can compete with the best.

“I love St. Louis and they love me back and are always behind me. They know fighters stumble but they always support me and I am ready to get back in the ring and show them that they have a real good champion from their city and that’s what I plan to show them.”

“My mindset is, I have to put a beating on him. This is it for me; it’s do or die. I’m very confident in the work I put in and with my conditioning, but I know I have to win this.

“Alexander is a good fighter. But he’s not going to change his style. I know I have to go in and take it to him. I can box, too, but to make this fight exciting I have to pressure him and make him fight my fight.

“My total concentration has been on this Saturday and Devon Alexander. I’ve had some hard fights, but win this and then I can take a rest.”

“I had the privilege of becoming a world champion early. I’ve been a professional for almost 13 years. There was never a doubt in my mind that I wouldn’t come back. I needed to take time to be a family man and come back when I felt like I could come back.

“I’m looking to get back to being the old Chad Dawson, the smart boxer who has height and reach. Once I get back to that, back to the top. I’m happy to be back in the game. I have to thank Al Haymon for giving me the opportunity; my division is hot right now.

“I’ve seen tapes of Blades from 2007. He looks like a durable guy. He is coming to win, it’s a big opportunity on TV.

“I don’t have anything to prove except for myself and my family. I know what I am capable of.”

“I’m extremely happy and blessed to have signed a contract with Golden Boy. They have given me the opportunity to go on to bigger and better things in my career. This will be my ninth pro fight and ninth in Los Angeles.

“In the amateurs I was considered a pure brawler, but since turning going pro and hooking up with trainer Manny Robles, he has changed me up a little and now I have learned to think and show patience in the ring.

“My career is just starting and I’m starting from the bottom up. I have to take it one step at a time. It’s like building a big brick hose. You do it one brick at a time, and that’s how it is with my career. Saturday is just another step for me”

“I’m very excited about Saturday’s fights. It’s great to have Robert Guerrero back and fighting again, but he’s got a tough opponent in Yoshihiro Kamegai. Devon Alexander and Jesus Soto Karass is another excellent, tough fight, a 50-50 fight that you know that both fighters are coming to win.

“The world title fight is another 50-50 fight, Gary Russell Jr. vs. Vasyl Lomachenko. I’m very proud of this event, from top to bottom. I truly believe the fans are in for a great night of fights.

“This is the kind of event that Golden Boy Promotions is all about: great fighters, crowd-pleasing fights.”