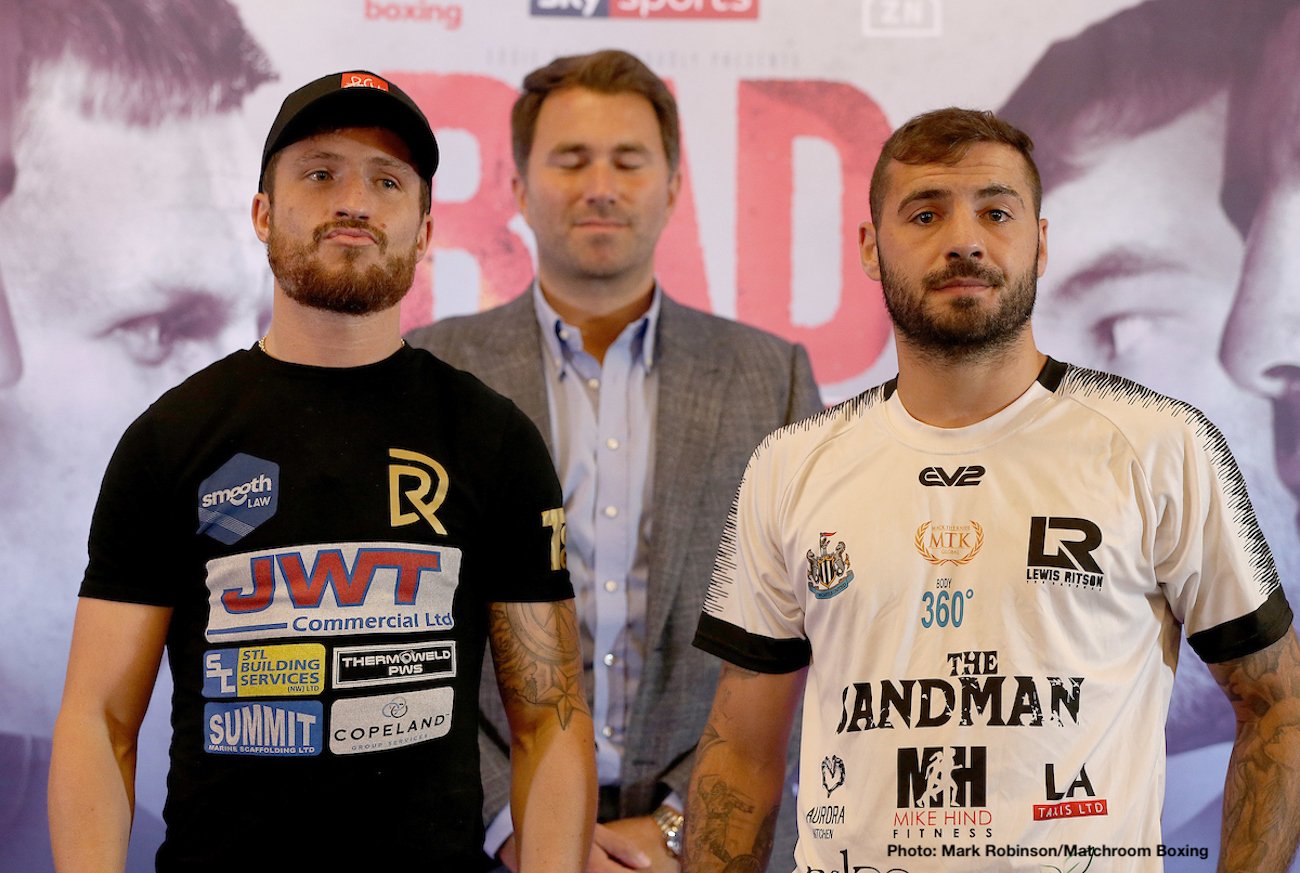 Eddie Hearn: “We are so pleased to be back here in Newcastle, this is a massive card and an official Eliminator for the WBA Super-Lightweight World title between Robbie Davies Jr and Lewis Ritson. This is a massive opportunity for both men.

“Robbie Davies Jr has climbed his way up the World rankings with the WBA, winning the British and European titles and now wants that shot at the World Championship at 140lbs.

“Lewis Ritson dominated for a long time domestically at Lightweight, now up at Light-Welter he is looking very strong and I think this is going to be one of the fights of the year.

“The fights on this card are exactly the types of fights we want to be making. Robbie is ranked top ten in the world, he’s from Liverpool and the gauntlet was laid down for him to come to Newcastle to face Lewis Ritson in his back yard and he took it, because he fancies it.

“Dave Allen and Savannah Marshall are also on the card with plenty more to be announced soon.”

“I’ve had some good nights, I’ve had some bad nights but the night last year at the Arena was my favourite night.

“I beat Samir Nebo and who’s Samir Nebo? No one really knows, so it was the people that made it and that’s why I want to come back so bad and I’ll be there now in seven weeks.

“It was hard to swallow but I like David Price and I’ve seen him after the fight and I shook his hand and he was the better man.

“But really when I lost to David Price I thought ‘really it’s not that bad’ because I’ll get to come back and win again, another chapter in the book, another 20 minutes in the film.

“I’m injury free now and just happy to be here, it’s starting to feel real. Ted is British Champion for a reason and that will get me working hard in the gym everyday. It is my first 12 round fight and he’s had a few, I’ll make sure there will be no stone unturned and will be ready if it goes the full 12 rounds.

“I’ve been trying to keep calmer ahead of this fight and to get fitter, I believe I can win inside the distance. He’s a tough man and it could go 12, I do think if I land I can get rid of him. I’m prepared for 12 and will take either to win and get that British title which I have always wanted.”

“I have been in good fights for the last two and a half years at this level and at twelve rounds. I can fight at a high pace and I’m very tough.

“Scott is a great fighter and had a great win in his last fight and everyone is betting against me now because of my last two fights. After I beat Byfield people would have had me as favourite but I have had a couple of hiccups and it hasn’t gone right this year.

“It is how you finish the year not start it and I’m looking forward to putting the pace on him early and getting the win. However I win I will be happy, I’m just making sure I get that win on October 19.

“When you box your first 12 rounder you’re always second guessing yourself because you don’t know if you can do it. I’ve been there and have that experience. I am tough and haven’t maybe shown my boxing ability but I can box as well. I am fully focused and tunnel visioned to get this win on October 19.

“This is a massive opportunity back in my home city, Newcastle. The atmosphere has been amazing here and it will be again on October 19 – there’s 1000 tickets gone already. We will be ready on the night and we will see what Robbie brings.

“The bad blood doesn’t change things at all, I was just stating facts. He was writing a few things on social media. It wasn’t me who backed out the two fights it was him, he said he wasn’t ready. He’s only here because he’s getting a career-best pay-day and he can’t sell-out in Liverpool.

“I have to turn up on the night, I’m not daft and I know that it is going to be a tough fight. I think it should be for the European title as well but we won’t go into that. This is an important fight for both of us and we will see on the night, we both think we’re going to win and are both putting it on the line. Let’s get it on.

“Last time I fought a Sunderland lad in Newcastle and now I’m fighting a Newcastle lad in Newcastle so it is a big occasion. This spat started on Twitter, when the fight got put to me I was European and British Champion at the time and I thought why am I going to Newcastle, tell them we will have it in Liverpool.

“I only knocked back the original fight because I would have only had six or seven weeks to train. I was like a Middleweight and never would have made the weight in time. If I didn’t want the fight in Liverpool then why would I agree to come to Newcastle?

“The only reason that I am no longer European Champion is because I have taken this fight. I am not one for confrontation but when people are spilling lies it annoys me. I will take a fight with anyone who is put in front of me, it doesn’t matter where it is. It is just a fight once we are both in there.

“In the past when he was at Lightweight he blew through the division but his opponents weren’t in the best shape and took fights on late notice. That’s no fault of Lewis who just got in there and did what he needed to do and blew them away. When he fought Patera who was a big solid, experienced Lightweight that was his first fight where there was back and forth exchanges and he fell short. He says he moved up a weight because he wasn’t at his best not because Patera was better than him.

“He still hasn’t fought any legitimate ten-stone-men. I just feel that my experience on the night having been in there with the bigger and stronger men will tell and in the later rounds I will be too strong. I may walk into that arena in Newcastle getting booed but I will be applauded out because I will win the respect of the crowd.

“There hasn’t been many rivalries in British boxing recently and this fight has captured the imagination of fight fans. I am 100% confident of winning this fight, I wouldn’t take a fight in someone’s back yard if I wasn’t confident. I expect Lewis to bring his A-game and throw bombs in the early rounds but I will ride the storm. I am the bigger man and I will be on the night.”