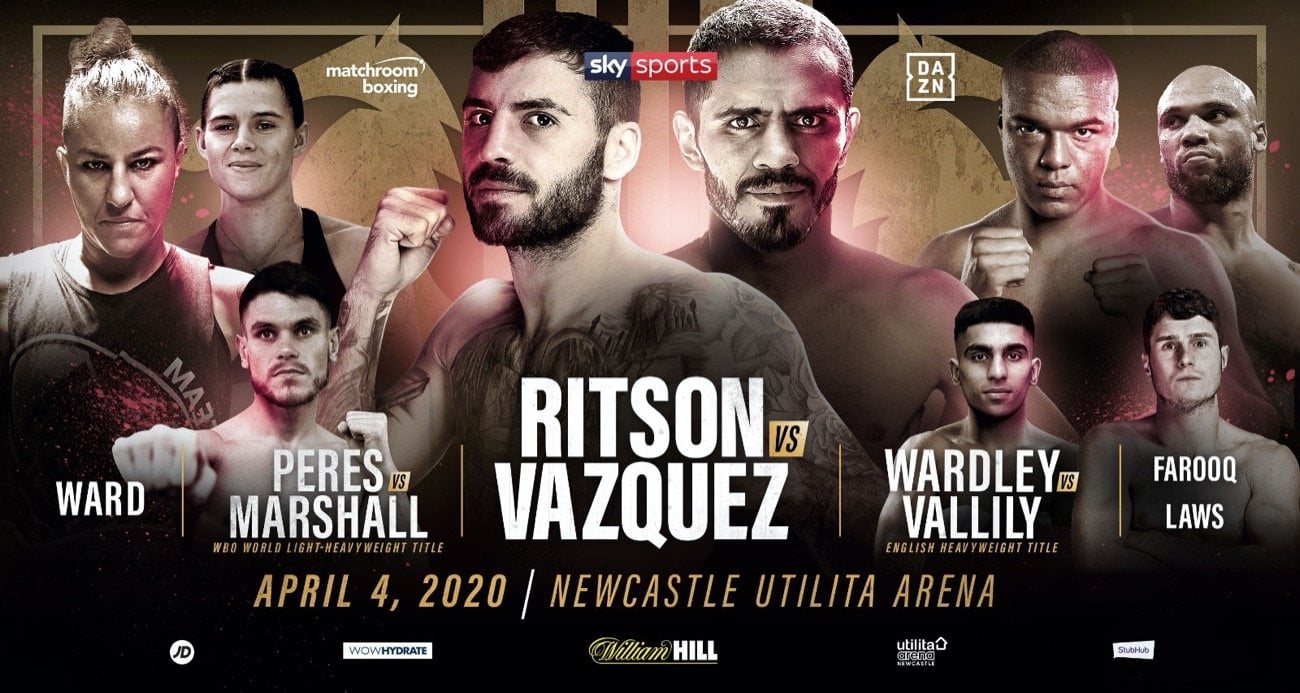 Lewis Ritson will clash with former long-reigning World Champion Miguel Vazquez on a huge night of action at the Utilita Arena Newcastle on Saturday April 4, live on Sky Sports in the UK and DAZN in the US.

Geordie favourite Ritson (20-1, 12 KOs) produced a career-best performance to beat bitter rival Robbie Davies Jr in an enthralling Fight of the Year Candidate last time out in October to stay in line for a shot at the WBA Super-Lightweight crown.

Tough Mexican Vazquez (42-9, 16 KOs) previously held the IBF Lightweight World Title for four years, making six defences of the title in that time, before losing to Mickey Bey via a controversial split decision in Las Vegas.

“He’s obviously been there and done it and got the t-shirt,” said Ritson. ‘’He is a world class fighter who has fought at the very top level of the sport and continues to do so, I need to be on my A game to get the win here.

“That’s the sort of fights we need now to get the best experience at that level. Get past Vazquez and I’m knocking on the door.

“Vazquez can do a bit of everything. He’s awkward, he can fight, he can box, but whatever he brings to the table, we’ll have to adapt to that and work out a way to beat him.

“We cannot look past him, there’s a lot riding on it, but if we get the win over Vazquez then it could lead to a World Title shot down the line.”

“I think Ritson is a very strong fighter and I am expecting a very hard fight,” said Vazquez. “This fight will be very entertaining and is a good fight for both of us, the fans will certainly leave happy.

“I think not only in Newcastle but across the UK fans will be supporting Lewis because they want another champion in the future, but I also want to be a champion again so because of this, I feel this is a really intriguing fight.

READ:
Baraou And Radovan Return On April 4th In Hamburg

“I know that Lewis will be very well prepared and anything could happen. I will prepare as I need to, in order to win this fight on April 4.”

Undefeated Super-Bantamweight slickster Thomas Patrick Ward (29-0, 4 KOs) takes another step in his seemingly unstoppable rise to a World Title after notching four wins in 2019 and cementing his place in the top 10 of the WBO and IBF rankings at 122lbs.

Glasgow Bantamweight contender Kash Farooq (13-1, 6 KOs) fights for the first time under the Matchroom Boxing banner as he targets a highly-anticipated rematch with British and Commonwealth Champion Lee McGregor following his controversial loss in November.

“I can’t wait to be back in Newcastle, it’s become an absolute must on the boxing calendar,” saidEddie Hearn. “After his FOTY contender with Robbie Davies Jr, Lewis Ritson is straight back in the deep end against former World Lightweight king Miguel Vazquez as he continues his quest to challenge for a World Title in 2020.

“Britain’s Savannah Marshall looks to continue the run for women’s boxing as she moves up in weight to challenge for the WBO Light-Heavyweight World Title against champion Geovana Peres and World number 3 Thomas Patrick Ward looks to continue his impressive rise.

“There is a great domestic Heavyweight battle as Dillian Whyte’s charge Fabio Wardley takes on Simon Vallily for the English title and the talented Kash Farooq returns to title action. The Benwell Bomber Joe Laws will once again light up the Newcastle Arena and with further additions to be added, we expect another electric atmosphere in the North East.”

Adam Smith, Head of Sky Sports Boxing Development, said: “We can’t wait to head back to Newcastle for another red-hot atmosphere as local hero Lewis Ritson returns against Miguel Vazquez.

“Ritson produced a classic domestic clash with Robbie Davies Jr, but now tests himself against Mexico’s Vazquez, a classy technician.

“On another action-packed night in the north east, Savannah Marshall is targeting a World Title triumph, just a few weeks after fellow Brit Terri Harper was crowned as WBC Champion, and Fabio Wardley is one to watch in the Heavyweight division.

“We’re ready to hear the Ritson roar in Newcastle!”

“It’s a pleasure to be back in Newcastle and it’s fair to say that you guys here today and especially the man to my right have revolutionised the boxing scene here. It’s going to be nearly two years when we return on April 4 since Lewis’ first big fight there against Paul Hyland and we witnessed a great performance from him that night.

“The Patera loss was one that made him as a fighter but at the time took the wind out of the sails and we wondered if we would be able to go on from there and claim this city as a major fight night location for Sky Sports.

“Lewis’ last fight against Robbie was a brilliant fight and a great occasion in what is remembered as a Fight of the Year contender. Boxing in Newcastle has become an experience now with fans wanting to be a part of the atmosphere that is created in the arena on fight night. Lewis has become a major draw in British boxing and that’s what it’s all about.

“Miguel Vazquez is a great fighter, a former IBF World Champion who is smart and has a style which is very tough to beat. He is on the hunt to become a two-weight World Champion and that begins on April 4.

“When we look down the card, Kash Farooq is one of the best young fighters to come out of Scotland for a long time, Wardley against Vallily is a great Heavyweight match-up for the English Title and Thomas Patrick Ward is I believe the hidden gem of the North-East.

“Thomas is bang on the verge of challenging for a World Title, currently ranked #3 in the world and he is a great talent who has gone under the radar. With a victory on April 4 I believe that he will secure a fight for the World Title this summer.

“Savannah Marshall will challenge for the WBO World Light-Heavyweight crown and she has picked the right time to come forward. She challenges Peres in Newcastle and for me women’s boxing is at an all time high right now. Savannah steps out of her comfort zone to take on a World Champion and the North-East has a chance to crown another World ruler on April 4.”

“This will be a very hard fight but I feel if I get through this we will have three World Champions in the North-East in me, Tommy and Savannah.

“He can do a bit of everything and he’s proved that as a World Champion. He was a champion for a long time but I know Fanno will put together a solid gameplan and we will come away with the win.

“This is the sort of fight that I need for the experience to get to that next level. I showed that against Robbie Davies Jr and I will show this again and bring back some big nights to the North-East.

“It’s not just Newcastle it’s the whole North-East. As long as the fighters on the undercard keep winning and the main event keeps winning then we will continue to bring great nights here in what I think is the best atmosphere in the country.

“I will be very tough to beat in the arena and Vazquez will feel like he is fighting two people in there with the noise levels. It’s a great time for the division and I’m confident that I am more than capable of beating any of them, I’ll get Vazquez out of the way and then I want that World Title shot.”

“Thanks for the invitation to come here, it’s always great to be in the UK because I feel at home here.

“I would really like to kickstart my career here so I can open some doors and have a good end to my professional journey.

“I just want to say thanks for the opportunity, Eddie, Matchroom and MTK. Just for the chance to box for a World Title in Newcastle, even if it is at the weight above, I’m jumped at the chance. She’s a reigning, defending World Champion. And she’s a weight above so I know she can whack. She’s a Brazilian-born adopted Kiwi, so that just screams toughness.

“These are the challenges that I want. Women can go up and down in the weights because there aren’t that many women about. This is just the start for me and I’m hoping to become a World Champion on April 4th in Newcastle.

“I’ve got the height there for Light-Heavy, Super-Middle and Middle. I’m strict with myself and I train hard. That does allow me to go up and down the weights. I’m comfortable at Middle, I’ve never been a true Super-Middle. I know I can hold the weight and do it properly. I’m looking forward to this one.”

“I believe I’m right in line for a World Title shot this year. I’m excited to get out and get a good win on April 4th. The division is there for me. There’s some good champions in the weight but I believe I’m the best of the lot.

“I’ve been flying under the radar for some time like you said and I believe that I’ve got the skills to beat anybody. Anybody that steps in the ring with me have only got a chance of beating me by knocking me out, and my chin is perfect so I believe I’m the best in the division and I will show it.

“They’re all great champions in this division. Like I said, I believe I am the best. My skills will be too much for them. I’m not saying it’s going to be an easy night, not one bit, but I’ve got a full bag of tricks and people won’t realise how good I am until the champions are in the ring fighting me.”

“You alright Eddie? I’ve made the poster this time. I’m feeling good, camp has been going well. And I’m moving down in weight; I’m feeling better and stronger in the gym. The last two arena shows have been amazing. The atmosphere we bring is special and I can’t wait for it.

“My previous fights were like 148 and 147lbs, 150 some of them, so I’m going to move down slowly. I’m fighting two weeks on Saturday, one fight at 142 and then I’ll just keep bringing myself down until next year when I’m 135 and I believe at that weight I’ll be a proper handful.

“I’m on six rounds now. Later this year I’ll do a few eights, test the waters and all that, and next year I’ll be ready for them titles. Devin Haney is one of the main reasons that I’ve moved down to 135, people having been saying ‘what’s the point in calling someone out when you’re a different weight’? So I thought I’d get to 135, put some wins together, up the rounds, and if he wants to step up then come to Newcastle. Let’s get it on.”

“Women’s boxing is in an amazing place at the moment. I watched Terri over the weekend and I thought she looked amazing. And I feel like the hype for women’s boxing has grown and I’m just happy to be a part of it. I can’t wait for Savannah to get a World Title on April 4th