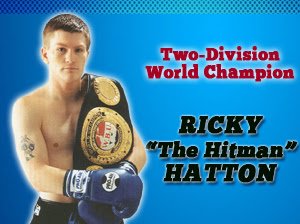 “I’m very honored to be invited to the 30th anniversary of the Hall of Fame in Canastota. I’m looking forward to the weekend, a chance to catch up with some familiar faces and meet boxing fans,” said Hatton.

The pride of Manchester, England, Hatton turned pro in 1997 and won world titles in two weight divisions. He reigned as both junior welterweight (WBU 2001-05, IBF 2005-06, 2007, WBA 2005-06) and welterweight (WBA 2006) champion. “The Hitman” holds wins over Freddie Pendleton, Eamonn Magee, Vince Phillips, Ben Tackie, Jose Luis Castillo, Juan Lazcano, Paulie Malignaggi and Hall of Famer Kostya Tszyu. Hatton, who was named 2005’s “Fighter of the Year” and received the MBE in 2007 for services to sport, retired in 2012 with a record of 45-3, (32 KOs). In retirement, Hatton has remained active in the sweet science as a promoter and trainer.

“Ricky Hatton brought so much excitement to the 140 and 147 pound divisions during his championship career and electrified fight fans around the world with his crowd-pleasing style,” said Hall of Fame director Edward Brophy. “The Hall is truly excited that he will travel from England to be in Canastota to help us celebrate our 30th Anniversary.”