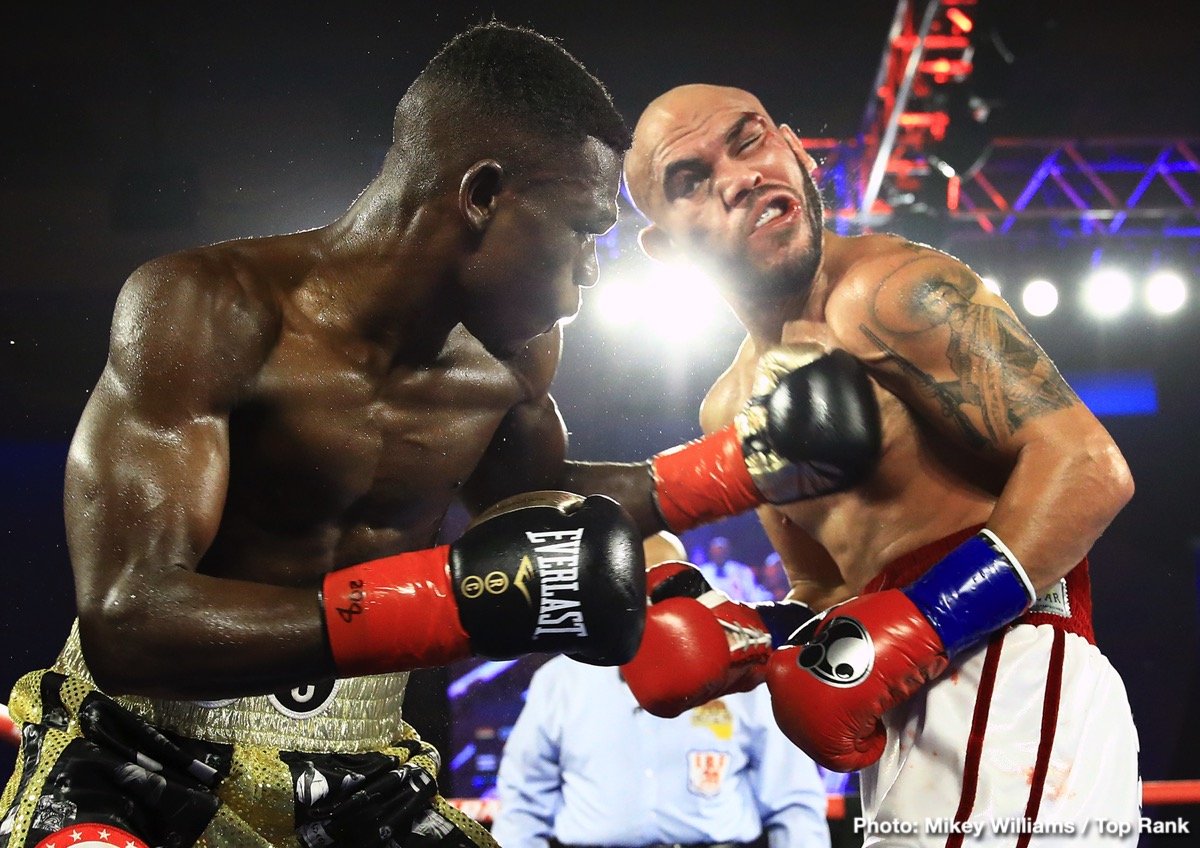 On Friday night at the Pechanga Resort and Casino and telecast live on ESPN, IBF Lightweight World Champion Richard Commey (29-2, 26 KOs), of Accra, Ghana, and now based out of The Bronx, NY, continued to put the division on notice with a dominant performance culminating in an eighth-round knockout of former world champion Ray Beltran (36-9-1, 22 KOs), of Avondale, AZ, via Sinaloa, Mexico.

Setting the tone early, Commey dropped Beltran twice in the opening stanza, once more in the fifth round and finally in the eighth round, as referee Edward Hernandez called a halt to the action at the 0:54 second mark of the frame.

“I feel great. It was my first defense and it was against a former world champion,” said Commey. “Beltran is a strong guy and not easy to stop.”

Beltran had missed the 135lb. weight limit at Thursday’s official weigh-in and was unable to win the world title.

“It looks like Teofimo Lopez is next, but he has a job to do first,” stated Commey. “That would be a great fight.”

“That was a dominant performance by Richard,” said Lou DiBella, President of DiBella Entertainment. “This was his first fight since winning the world title in February and he showed that he’s ready for anyone in the lightweight division. Beltran is a warrior and a former world champion, but Richard showed why he’s a class above.”

Commey is trained by Andre Rozier in Brooklyn, NY.

Starting fast, the 26-year-old Day appeared to bank the majority of the early rounds with his speed and boxing ability. However, Adames came on strong over the second half and his effective aggressiveness impressed the judges.

Also featured from the DiBella Entertainment stable, undefeated heavyweight contender Junior Fa (18-0, 10 KOs), of New Zealand, won a 10-round unanimous decision against veteran Dominick Guinn (37-13-1, 26 KOs), of Humble, TX. Fa survived a fourth-round knockdown to win by scores of 98-91 twice, and 97-92. Entering the contest, the 29-year-old Fa was ranked #7 by the WBO.

Otha Jones III notched his 2nd win in seven days over two continents as he won a six-round unanimous decision over Matias Arriagada in a super featherweight bout at The Dunkin Donuts Center in Providence, Rhode Island.

Last Saturday, Jones took out Michael Horabin in the 1st round at York Hall in London.

It was a good action fight that saw Jones land the harder punches against a game Arriagada. Jones, who showed fast hands and good combination work, used a variety of punches that landed which included some solid uppercuts.

“This fight taught me to be composed and adjust,” said Jones III. “I give myself a B. I will learn to sit down more on my punches, and placing my shots.

Joe Jones used his fast hands, and wore down Smith with body shots over the six-rounds. Jones won by scores of 59-55 twice and 59-54 to raise his mark to an impressive 11-1.