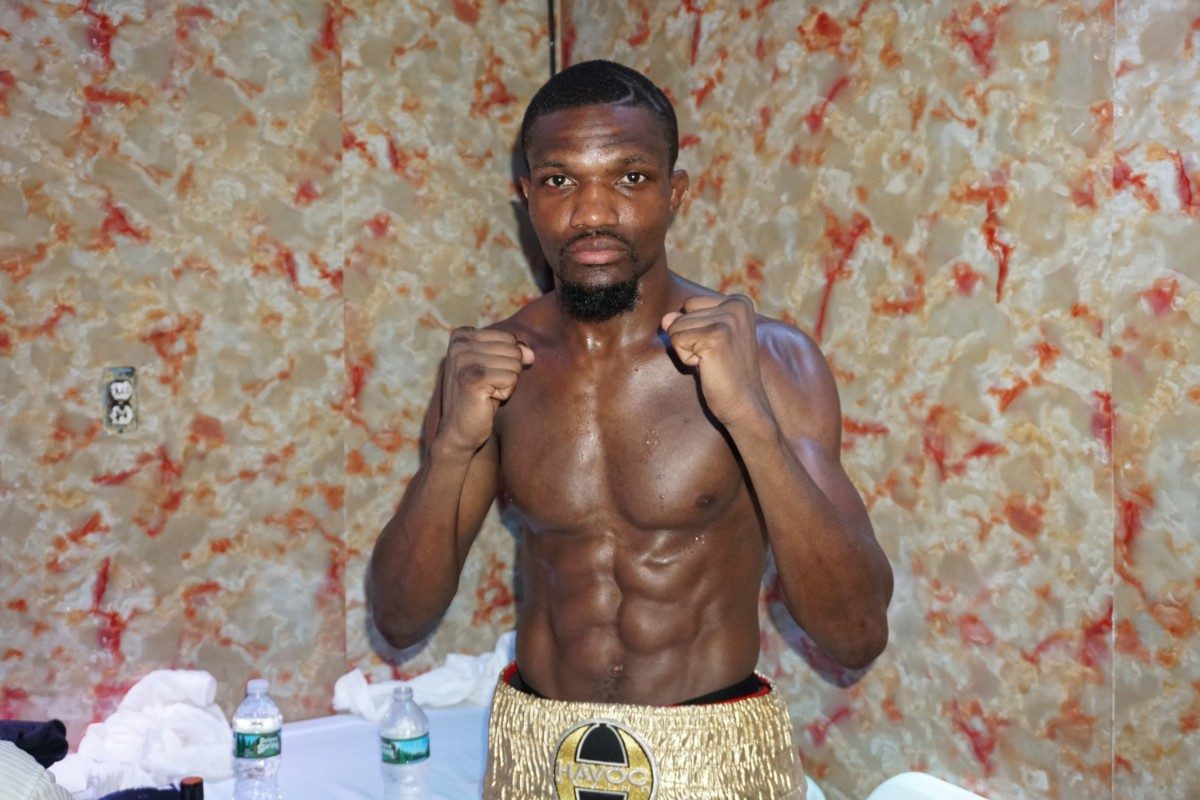 Ronson Frank’s Uprising Promotions and The New Mexican Promotion returned on Friday night with another exciting slate of boxing, presenting a seven-bout card to an energetic audience at Club Amazura in Queens, New York.

“It was another great night of boxing for Uprising Promotions and the New Mexican Promotion here at Club Amazura,” said Rory Frank, Vice President of Uprising Promotions. “This show had a nice mix of everything. The fights were competitive, and we also saw some exciting knockouts. We want to thank all of the fighters, coaches and fans who brought the energy to make it such an entertaining night.”

In the showcase bout of the evening, featherweight Titus Williams (9-2, 4 KOs) needed less than a round to dispose of Aaron Echeveste Lopez (6-4, 3 KOs). Despite the action lasting less than three minutes, the right-handed Williams put on a very impressive display of well-timed counter punching while holding court in the center of the ring.

About a minute into the opening frame, Lopez looked to flash inside of Williams, only to see the New York native unload a perfectly timed counter right uppercut that immediately flattened his opposition. Lopez got back to his feet, and Williams displayed patience as he methodically stalked his man while looking for another opening. He soon found it just before the close of the opening frame, as Lopez stepped into a beautifully timed counter right hand that put him on his back for a second time.

Lopez did once again climb to his feet, but referee Steve Willis did not like what he saw when he looked into his eyes. He opted to wave off the bout so Lopez did not receive any more damage, with the official stoppage coming at 2:54 of the very first round.

In the co-feature of the evening, bantamweight Ariel Lopez (13-0, 8 KOs) had a game opponent in Ivan Martino Jiminez (5-4, 5 KOs), but he was able to break him down over the course of four frames before getting a deserved stoppage. Lopez continually showed off some quick hands while picking his spots, also throwing hooks around the tightly worn guard of Jiminez to get inside.

Midway through the fourth round, Lopez unleashed a body shot directly to the solar plexus of Jiminez that put him on the floor in obvious pain. Although it looked like Jiminez would be unable to continue, he somehow worked his way back onto his feet. When action resumed, Lopez intelligently returned to the body, backing up a hurt Jiminez until the referee stoppage came at the 1:53 mark of the fourth frame.

In a 143-pound catchweight bout, Cesar Francis (6-0, 4 KOs) engaged in an entertaining six-round scrap with Antonio Sanchez Hernandez (6-7-2, 3 KOs). Francis was able to use his height and length advantage in the early frames, but Hernandez adjusted and slipped well throughout the encounter to force Francis to fight on the inside. While Hernandez was certainly a game opponent, Francis proved that he was on a more elevated level in this one to eventually pick up the well-earned victory.

When the six action rounds concluded, Francis increased the tally on his unblemished record with scores of 60-54 (twice) and 59-55.

Mathew Gonzalez (9-0, 6 KOs) also improved his unbeaten mark on Friday night, making quick work of veteran Federico Jesus Malespina (16-13-2, 2 KOs) in less than one frame. Gonzalez showed off his quickness and ability to pivot in the little time he was allotted before unloading a fight-ending right hook to the body of Malespina. A 10-count was delivered after the vicious blow, officially ending this one 73 seconds after it started.

In his pro debut, Brooklyn welterweight Raymond Wilburg (1-0, 1 KO) engaged in an action-packed first round with Jean Hernandez (0-2) that saw both fighters giving and taking. In the second frame, Wilburg quickly settled in comfortably and started firing some heavy punches with both hands. His powerful strikes were repeatedly finding a home, and this bout was forced to be waved off just 27 seconds into that second round. The stoppage sent the hometown fans into an uproar, making it a successful debut for Wilburg.

In a cruiserweight attraction, Jan Czerklewicz (2-0, 0 KOs) was able to outwork Mike Diorio (0-2) over four frames, moving well and using his length to score flush 40-36 scorecards from the ringside judges.

In the opening fight of the evening, Brooklyn middleweight Hosam Abdeldayem (1-0, 0 KOs) and Daniel Jefferson (0-1) engaged in a competitive four-framer that saw scores all over the place once it concluded. However, it was Abdeldayem who earned his first professional win when the judges turned in those final tallies. The first card was read 39-37 for Jefferson, but that count was nullified with scores of 39-37 and 38-37 in favor of Abdeldayem on the final pair of cards.

Miss the action? Watch the full fight card now via Fight Night Live on Facebook, with Michael Woods and Xavier Porter calling the action from ringside.

Next up for Uprising Promotions is the promotional debut of undefeated heavyweight Vladimir Tereshkin (20-0-1, 10 KOs), who take on Williams Ocando (21-8, 17 KOs) on Saturday night at the Ambassador Theatre in Kingston, Jamaica.