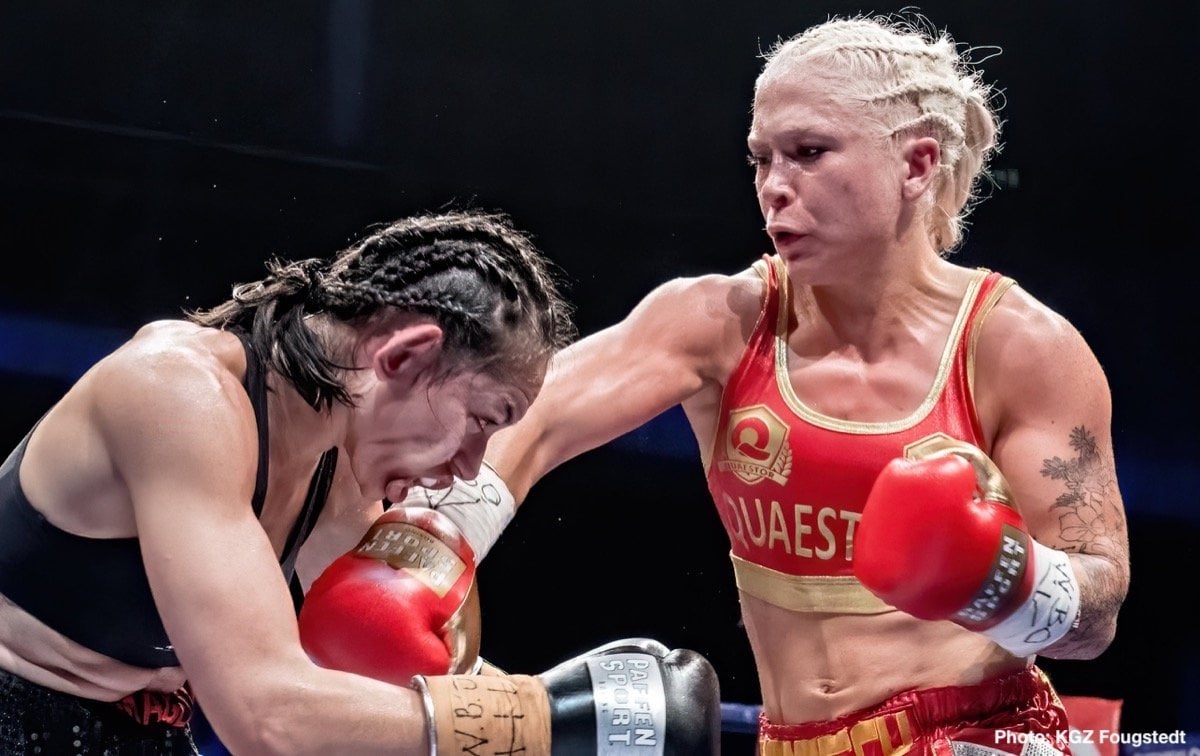 The Danish champion showed her class, winning every round on all three of the judges’ scorecards. She also showed her compassion by sparing a visibly stunned Adams in the final seconds of the tenth round, stepping back with smile and allowing the Australian challenger to finish the fight on her feet.

“I feel like I was in control for the whole fight,” said Thorslund following her second successive World title defence. “There wasn’t one second where I felt in doubt. It was a hard physical battle. April is a tough girl. She came here to win. I feel good and I’m very happy to have defended my belt in such a good fight.”

After the bout, Thorslund and her promoter Nisse Sauerland discussed future plans for the Danish star, including a move up in weight with a fight against WBO World Featherweight Champion Heather Hardy topping their wish list.

“That was a fantastic performance from Dina,” said Sauerland. “She showed tonight why she is one of the most exciting female fighters in the world. There are a lot of big opportunities for her now including a move up to featherweight and a fight with Heather Hardy. That would be huge in Denmark or America.”

“I want to be the best and that involves moving up in weight and collecting more titles,” said Thorslund. “I am ready to face anyone and that includes Hardy.”

This past Friday, prized prospect, 19 year-old Otha Jones III took out 13-fight veteran in one round in a bout that took place at York Hall London.

With the win, Jones ups his mark to 2-0 with one knockout.

Jones, a native of Toledo, Ohio, was a remarkable amateur as he was a 21-time National Champion, where he compiled a staggering 283-13 amateur record highlighted by representing Team USA in several international tournaments including winning a Gold Medal at the International Youth Continental Americas Tournament and Silver Medal at the Emil Jechev Memorial Tournament as well as winning several national tournaments such as the winning gold medals in United States National Championships (Twice) and the World Championship Qualifier.

Jones is managed by Split-T Management and is promoted by Matchroom Boxing.

This past weekend, GH3 Promotions heavyweights, Roney Hines and Norman Neely remained perfect with wins on Friday and Saturday respectively.

Hines of Cleveland, Ohio won on all three scorecards 39-37 to raise his mark to 7-0.

Neely of Paterson, New Jersey stopped Kendrick Houston in 79 seconds of their bout that took place at The Rosecroft Raceway in Fort Washington, Maryland.

With the win Neely is 2-0 with both wins coming via knockout.

Both Hines and Neely are managed by Sheer Sports Manageme