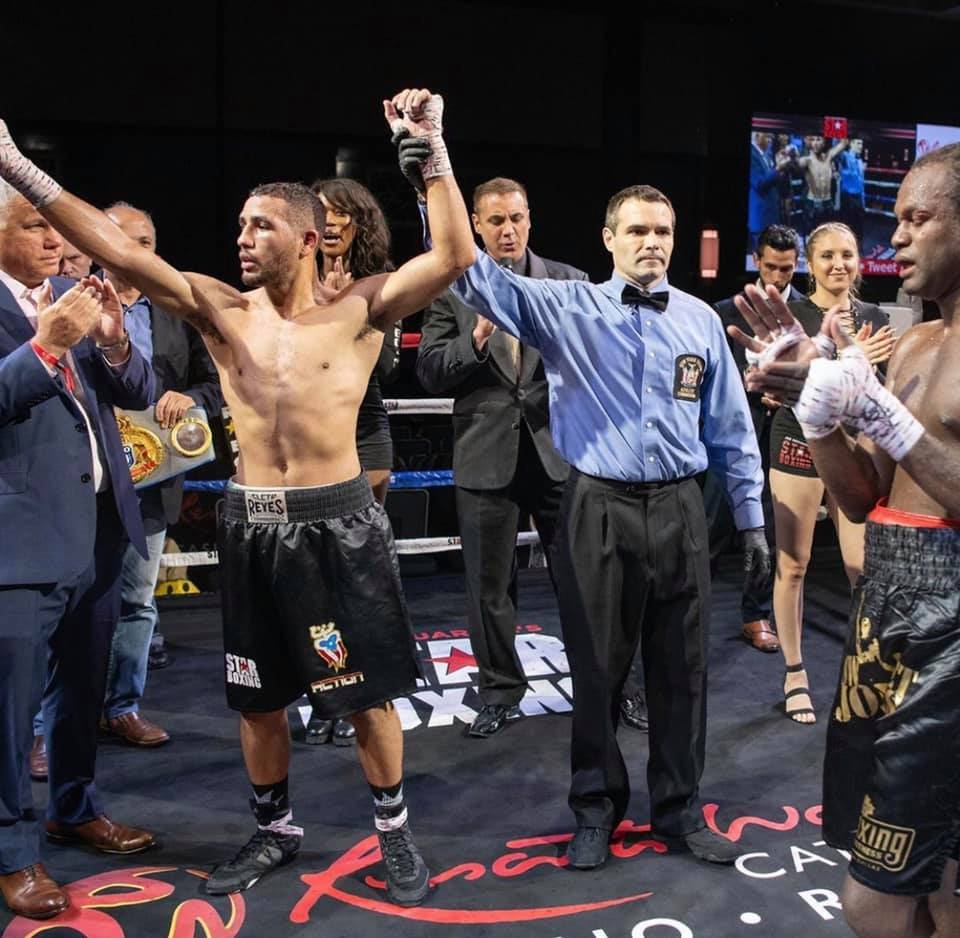 After signing with JOE DEGUARDIA’S STAR BOXING, just two weeks ago, heavyweight title contender, Carlos Takam made his much-anticipated United States debut at Resorts World Catskills, against the granite chinned, Detroit native, CRAIG LEWIS (now 14-4 7KO’s). The two went to battle from the opening bell. Takam wasted no time showing off his impressive agility, especially for a 255 lb. heavyweight. By round two, Takam took control, landing an overhand right that could be heard echo through the majestic mountains of the New York Catskills. However, Lewis stood tall, proving his ability to take a monster punch. Takam continued his attack for the remaining eight rounds of the scheduled ten round fight, earning the unanimous decision victory. (99-91 (x2), 96-94).

Carlos Takam had this to say about his US debut, “I’m very happy to have made my first fight in the United States last Saturday. It is a beautiful entrance. It’s a dream for me to box in the United States, in the the field of legends like Ali, Holyfield and Mike Tyson. Many thanks to my Promotor Joe [DeGuardia], my team and all my fans around the world. US fans get ready for more exciting moments coming soon.”

In the co-feature, “Action” Anthony Laureano lived up to his name once more, as he took on the extremely tough, BRIAN “SWEET” JONES (Clarskville, TX now 15-11 9KO’s). Making his first ABO title defense, Laureano and Jones put on a show that had the entire casino on their feet. After a feel out round in the first, it was all action for the remainder of the 8-round fight. Early in the seventh, Laureano pounced on Jones with his signature body attack, but Jones would not back down, pinning Laureano against the ropes, as both men traded freely to close out the round. When the final bell rang, the crowd was on their feet, roaring for the performance that Laureano and Jones put on for Resorts World Catskills. Laureano defended his ABO title earning a hard fought but clear victory for the East Hartford, Connecticut super lightweight, by unanimous decision. (80-72 (x2), 78-74).

Laureano said this about the incredible atmosphere at Resorts World Catskills, “It was Great to be back at Resort World Catskills. To win and defend the ABO title at Catskills was truly amazing. The energy in the crowd was like no other. It has become my home and I can’t wait to return.”

Richie “Popeye The Sailor Man” Rivera went toe to toe with another slugger in ISRAEL DUFFUS (Los Angeles, CA now 19-6 16KO’s). It was clear from the start that both men were throwing punches with bad intentions. In the middle rounds of the scheduled 8-round ABO title defense for Rivera, both fighters began to open up, to the pleasure of the Resorts World Catskills crowd. Richie landed an overhand right in the sixth round that caused “oh’s” and “ah’s” from the crowd. However, Duffus, would not go out quiet, attempting to force the action in an effort to find and opening to stop the man they call “Popeye.” While the effort was a valiant one, Rivera controlled the action, and defended his ABO America’s Title, earning the unanimous decision victory. (80-72 (x2), 78-74).

Richie had this to say about his victory, “I really enjoy the opportunity that Star Boxing has been giving me. I was able to show the crowd good boxing skills such as hit and dont get hit. I always like putting on a good show and I want to make my fans proud, but also to be a great representative to Star Boxing and Joe DeGuardia”

In the opening two bouts of the evening, decorated amateur standout, and undefeated professional welterweight BOUBACAR SYLLA (Cincinnati, OH now 11-0 7KO’s) took on the rugged JERMAINE CORLEY (Mount Vernon, NY now 3-7 1KO) in a 6-round all-out brawl. Sylla used his boxing skill and IQ to subdue the come forward attack of Corley, while Corley attempted to bring the fight to Sylla for the full 6-rounds. At the final bell, Sylla would remain undefeated, winning by split decision. (59-55 (x2) Sylla, 58-56 Corley).

Hometown hero, BRYANT “THE PUNISHER” COSTELLO (Liberty, NY now 1-1 1KO) had the crowd rocking from the opening bell of the night as he took on, ANTHONY “ANIMAL” EVERETTE (Lawrence, MA now 1-8). Costello controlled the action, landing over hand rights at will, as well as solid combinations from the body to the head. At 42 seconds of the third of the scheduled four round super welterweight bout, Costello landed a three-punch combination to the head of Everette, causing the referee to see enough, stopping the bout.

The Catskills came alive with boxing once more in no small part to the action and the sold-out crowd that packed Resorts World Catskills. CEO of Star Boxing JOE DEGUARDIA said this on the epic night of fights, “It was a pleasure to be back at the Catskills and have another night of truly impressive fights. To be able to not only continue the rebirth of boxing in the Catskills but do so with a top heavyweight contender in Carlos Takam, was a perfect match.” DeGuardia continued, “The crowd was electric, and truly showed that the love for our sport is still deeply engrained in Sullivan County and the Catskills, and we hope to be a part of this growth for many years to come.”