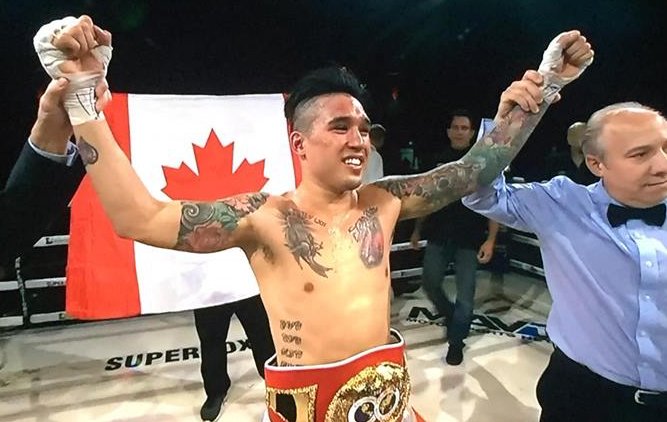 Consummate super lightweight road warrior Steve ‘The Dragon’ Claggett (27-5-1, 17 KOs) climbed up off the canvas from an opening round flash-knockdown last night at the Powerade Centre in Brampton, Ontario, and came roaring back to defeat previously unbeaten Petros Ananyan (13-1-2, 6 KOs) via unanimous decision. It was the main event of an exciting gala presented by Lee Baxter Promotions aired live in Canada on Super Channel dubbed “SUPERBOX LIVE’. The victory earned the Calgary, Alberta native the International Boxing Federation International Super Lightweight Title via a points victory. All three judges saw the fight the same at 95-94 for the Canadian charge.

Claggett looked to pressure the taller, rangier Ananyan from the outset but a short check-left hook from in close sent the Albertan tumbling to the canvass. He sprung up with his wits about him and rebounded nicely as the Russian looked to pour it on to close the opening stanza.

It was all Claggett in the ensuing rounds as he went to work pounding Ananyan to the body, leading behind a piston like jab to the head and midsection.

Ananyan came alive in Round 5 where he rocked Claggett early on, but the self-labeled “blood and guts warrior” dug deep and ended the round exchanging in what was the most exciting stanza in the bout.

‘The Dragon’ went back to work down the stretch, continuing to attack the body with sustained vigour. Ananyan did well to land some telling right hands but in most rounds he was being out-jabbed and out-landed at significant margin.

After ten rounds were complete Claggett’s unrelenting work-rate was the difference as all three judges were in agreement seeing the bout in his favour six rounds to four (minus a point for the opening round knockdown), 95-94 on all ledgers.

“I thought it was a great fight,” Claggett said post fight. “Much respect to Petros, he’s tough and strong. I’m very proud to have fought for this belt and to represent Canada. I put a lot on the line and fight with all my heart.”

“I felt it was a bit of a flash knockdown [in the first round] as we came together but it was a flush shot that caught me a bit cold. I went down, rolled and got back up but that’s part of the game. If you can’t get up from a knockdown you don’t deserve a title like this. I have no quit in my game and I dug deep. You really know what you’re made of when you go through adversity like that.”

“I have tried banging on the front door to get a world title and it wouldn’t open. Go to the sides, not open. The windows, closed. So we’re going through the back!”

October 15, 2017 – Calgary, Alberta: Eric de Guzman’s renowned Teofista Boxing Series is set to return to the Deerfoot Inn & Casino on Saturday Oct. 21st for the 26th installment of the popular gala. Some of Western Canada’s fastest emerging talents are slated to be featured including several big punchers ensuring a night of explosive action.

The event is set to be headlined by ‘The Champ’ and multi-time Canadian title winner Stuart McLellan (21-2-3, 6 KOs) of Williams Lake, BC who will take on hardened Mexican veteran Cesar Figueroa (8-10-1, 5 KOs).

McLellan, known as ‘The West Coast Warlord’, is surging having reeled off a ten fight unbeaten streak. That run began with a huge upset victory over formerly-world ranked Janks Trotter in February 2016 to capture a Canadian 154-pound crown and continued with a string of wins headlining Teofista Boxing Series’ expansion into Mexico. Largely regarded as one of the most avoided fighters in Canada, McLellan continues to chase an all-Canadian super fight with unbeaten Brandon Brewer and hopes another exciting win next Saturday will cause further demand for the bout.

In the co-main event, ‘Elvis’ will be in the building for a comeback special. Big punching Calgary based cruiserweight Elvis Vukaj (2-1) will look to resume his career fighting for the first time since 2015. A popular fighter due to his quick hands and all-action style, Vukaj has been looking to stage a comeback and after being given a clean bill of medical health by doctors Teofista Boxing is happy to give him the opportunity. He will face the always upset-minded big punching Taylor Bull (3-6, 3 KOs) in what is sure to be a fire-fight.

It will be ‘Bombs Away’ in preliminary action as the card will mark the return of big punching Alberta welterweight Connor ‘The Bomber’ Bush (4-1-1, 2 KOs) who will be clashing with the always exciting Maged Hammo (1-2) of Lethbridge.

In a hotly anticipated rematch, Calgary’s Mike Smallwood (5-1, 2 KOs) will look to build on his five-fight unbeaten streak when he re-engages with Kelowna’s Dia Grant (1-10, 1 KO). The two battled earlier this year at the Deerfoot Inn & Casino where Smallwood came away with a hard fought majority decision. The spirited Grant exercised his rematch clause and both fighters will look to remove all doubt come Saturday night.

In the opening bout of the evening super lightweights Louie Grover (0-2) of Calgary and Robert Nelson (0-4) of Saskatoon will face off with both men battling hard for their first pro victory. Each fighter is known for their come-forward, fan friendly styles and when all is said and done someone will have “1”!

There has been some buzz about another potential heavyweight bout that may be added to the card so stay tuned for more info!

Tickets are a hot item so don’t wait, visit Teofista.com and get yours today.

The Deerfoot Inn & Casino is one of the premier Calgary hotels, located in the South, this full-service hotel features 188 deluxe guest rooms, a conference center for meetings and conventions, a giant indoor water park, as well as four exceptional restaurants for dining. The complex is located at 11500 35 St SE #1000, Calgary, AB T2Z 3W4. The doors open for the show Saturday Oct. 21st at 6:30 p.m. with the first bell set to ring at 7:00.

Season passes to Teofista Boxing Series are available on corporate, group and individual levels. Reserved seats and luxurious tables are offered for the entire year.

Don’t miss your opportunity to get intimate exposure to thousands of people per event as well as the local traffic exposed to branding on advertisements in the Deerfoot Inn & Casino.

Teofista Boxing Series will be streaming live on social media via the Internet and has plans to move to national television in the next few years.