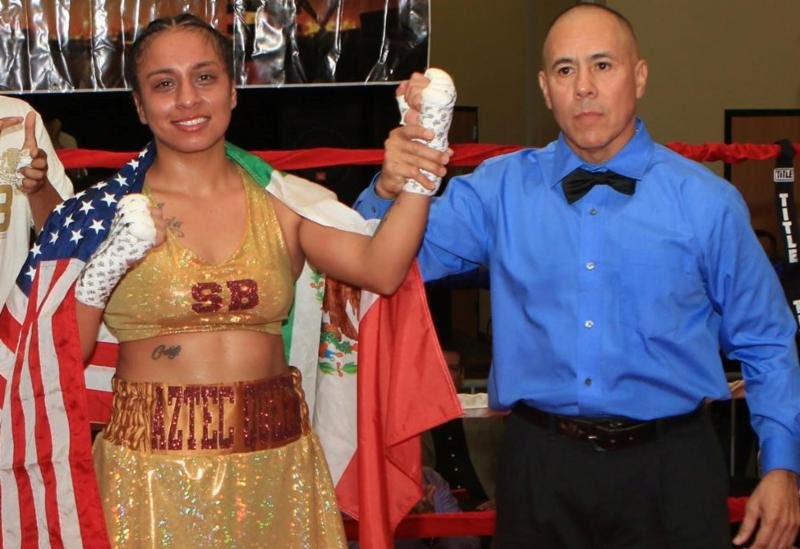 Last night in star fashion, San Antonio’s undefeated female boxing sensation, Selina “Aztec Queen” Barrios,” improved to (4-0, 2 KOs), with devastating one punch knockout over current WBF international lightweight champion, Aida “Lady Sparta” Satybaldinova (3-1-1). Barrios landed a crushing picture perfect left hook to the chin of Satybaldinova, ending the bout at the 1:24 mark of round four, in what many would say is a candidate for “Knockout of the Year”. The fight that took place at the American Bank Center Water Garden room in Corpus Christi, TX, presented by Reyna Promotions.

From the opening bell both fighters went bombs away, with Selina landing the cleaner, more powerful blows to Satybaldinova. “Lady Sparta” was all game as she went toe-to-toe with Barrios, holding her ground for the time being, but taking a lot of damage. In round two, both fighters continued to leave everything in the ring, throwing power punches with both hands. Barrios again was getting the better punches off. In round three, Barrios hurt Satybaldinova with a combination flurry of punches, but Aida being the warrior that she is, made it to round four. After another aggressive being to the round, Barrios landed that massive left hook to the jaw of Satybaldinova, and the fight was over.

“I wanted to come out tonight and give my Texas fans a night to remember,” said Selina Barrios, who is the current NABF lightweight champion. “After feeling her out in the first couple of rounds, I knew I was going to land a big shot at some point in the right, because she was standing right in front of me. When I landed that left hook, I knew she wasn’t going to get up. I set it up nicely, and she walked right into it. I have a lot of respect for Aida, she fought like a warrior, and if she wants the rematch, I’ll give it to her.”

“I fought hard but didn’t get victory tonight,” said Satybaldinova. “Next time I will win. I will continue to work harder to fight the best. I will never give up. I hope to fight Selina again in rematch.”

With the victory, Selina gets the fourth win of her career. Barrios said she is willing to fight anyone in the lightweight division, including all champions. When asked about what next Barrios stated.

“I want to call out all the women fighting in the lightweight division.” Barrios continued. “You might have took the Olympics from me, but you cant run from me now. Katie Taylor and Mikaela Mayer, you can’t hide forever, I’m coming for all Y’all.”

“Selina put on a spectacular show tonight,” said Colin Campbell, co-manager of Barrios. “A performance like this puts her at the top of all females vying to be considered the most dangerous fighter in women’s boxing.”

“What an unbelievable knockout Selina displayed tonight,” stated Charles Campbell, who co-manages Barrios with his son Colin. “Once the knockout hits the masses, its going to go viral. Selina belongs up there with Clarissa Shield as one of the best female boxers in the sport. No female boxer is more exciting to watch then Selina Barrios, no one!”

“All females fighting at lightweight and super featherweight better take notice of Selina Barrios.” said Barrios’ advisor-promoter Kerry Daigle, of Keep Punching Entertainment. “Although Selina had a remarkable performance tonight, the best is yet to come. We still haven’t seen the best Selina Barrios yet, and that is scary. She is taking the boxing world by storm.”