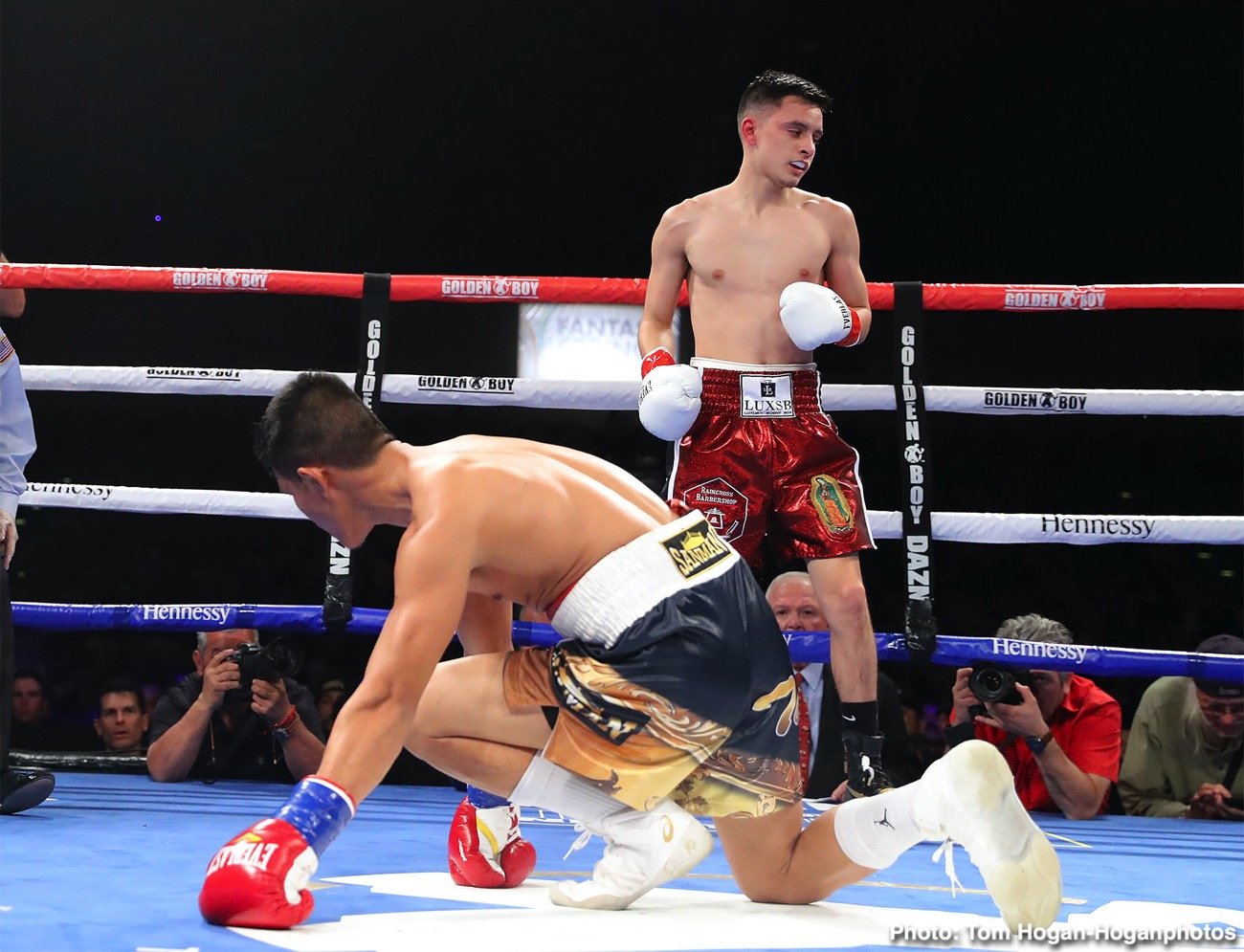 Flyweight contender Ricard “El Niño” Sandoval (18-1, 13 KOs) of Riverside, Calif. defeated Filipino contender Raymond “Tornado” Tabugon (22-12-1, 11 KOs) via seventh-round knockout in the scheduled 10-round main event of Golden Boy and DAZN’s Thursday Night Fights on Feb. 6 at Fantasy Springs Resort Casino in Indio, Calif. The fight was stopped at 1:43 minutes of the aforementioned round. The fights were streamed live on DAZN, RingTV.com and on Facebook Watch via the Golden Boy Fight Night Page.

“It was a tough fight,” said Oscar Negrete. “I have to recognize that Alberto Melian is an amazing fighter. He came to win. He won the public’s respect tonight. I did what I had to do to win the fight. We want an opportunity to fight for a world title. I deserve it. We worked extremely hard to get here.

“I thought it was an exciting fight for the fans,” said Sulem Urbina. “I tried to get the stoppage, but she had a strong will. I learned a lot from my opponent. It was an honor to fight her. I hope Golden Boy keeps an eye out for me.”

“My opponent was an interim champion,” said Leonardo Baez. “He had more experience than me. That’s why we trained hard in the gym. I want bigger fights and tougher opponents.”

Super Bantamweights Anthony “The Quiet Storm” Reyes (7-0-1, 5 KOs) of Coachella, Calif. and Diuhl “Elegante” Olguin (14-13-4, 9 KOs) of Guadalajara, Mexico fought to a third-round technical draw after a headbutt, which caused a severe cut on Reyes’ forehead, forced the referee to stop the action at :35 seconds of the round just mentioned.

“At first I was doing good,” said Anthony Reyes. “I was still warming up. My opponent was very experienced. Unfortunately, the headbutt happened. The cut was pretty deep.”

“I feel unsatisfied,” said Diuhl Olguin. “The fight was barely going to start. My opponent was a great counter puncher. I was pressuring and unfortunately the headbutt occurred.”

Oscar Acevedo (7-0) of Los Angeles, Calif. defeated Dan Murray (5-3) of Lanoka Harbor, New Jersey via technical majority decision in a scheduled six-round clash. The fight was stopped at 2:36 of the last round after Murray suffered a severe cut, which was caused by a headbutt. The action went to the scorecards, where Acevedo was victorious with scores of 59-55, 57-57 and 59-55.

“I think I did good, said Oscar Acevedo. “Better than my last fight. He was tough and came to fight. Now back to the gym to get better.”

“It was a good fight,” said Anthony Garnica. “He was a tough opponent. He came to fight. I executed the game plan. I settled down through the rounds and got it done.”

Jan “Nito” Salvatierra (4-0, 2 KOs) of Los Cabos, Mexico stopped Miguel Rebullosa (4-10, 2 KOs) of Coahuila, Mexico in a super flyweight battle after a barrage of punches from Salvatierra forced the referee to stop the action. The fight came to a halt at 1:47 of the fourth round.

“I felt very tense and nervous,” said Jan Salvatierra. “That’s because this was my first fight in the U.S. I demonstrated what we have been working on in the gym. He was a strong opponent.”

Sandoval vs. Tabugon was a 10-round super flyweight fight presented by Golden Boy. The fight took place on Thursday, February 6, 2020 at Fantasy Springs Resort Casino in Indio, Calif. The event was streamed live on DAZN, RingTV.com and on Facebook Watch via the Golden Boy Fight Night Page beginning at 10:00 p.m. ET/7:00 p.m. PT. 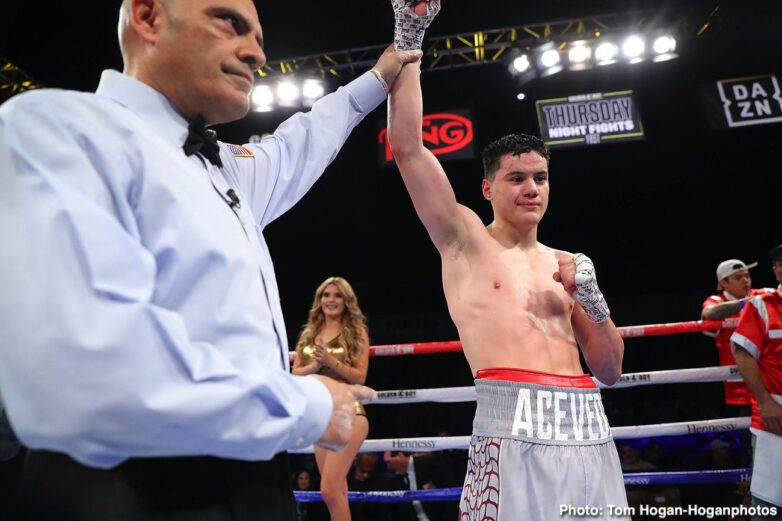 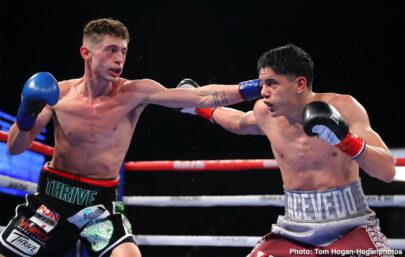 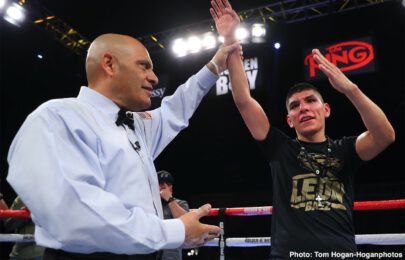 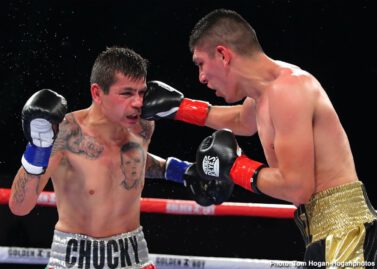 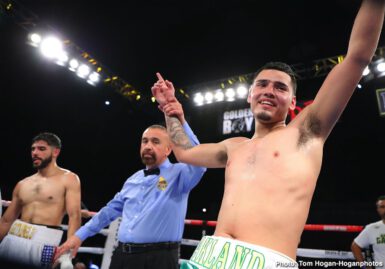 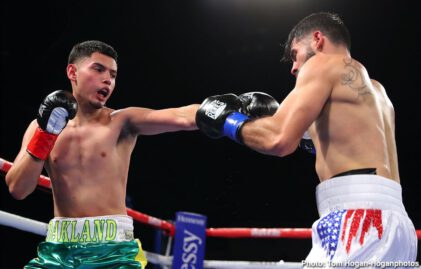 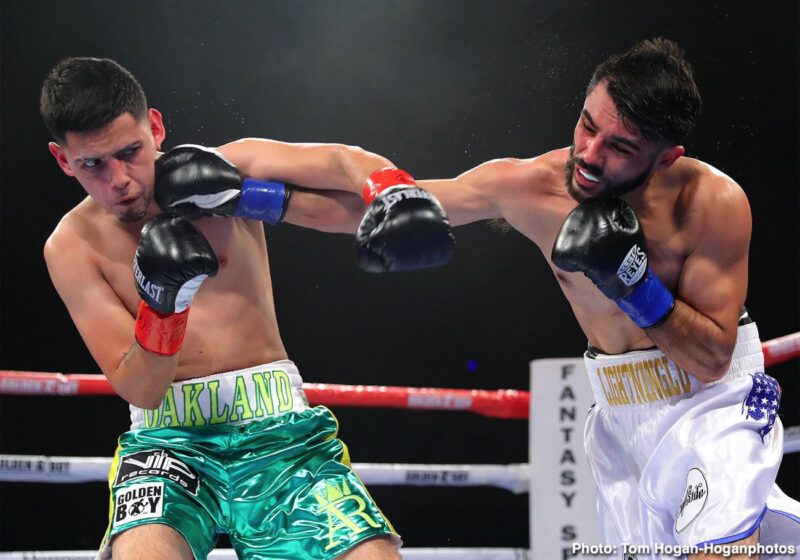 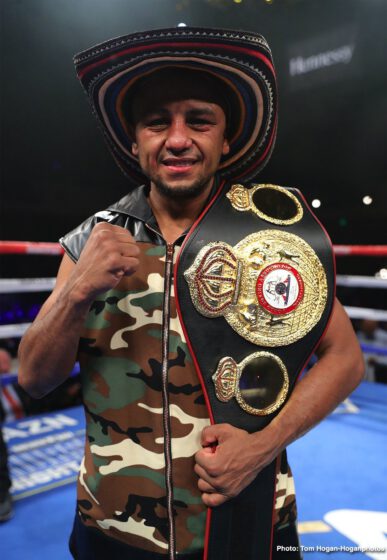 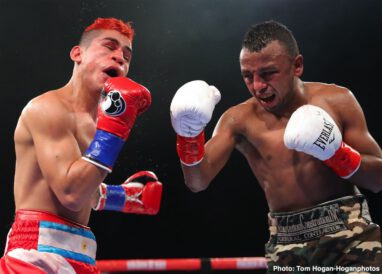 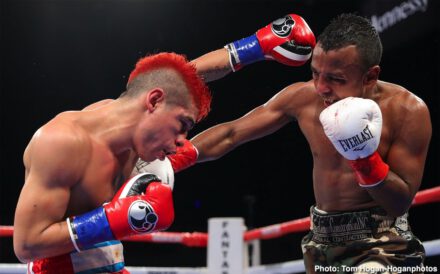 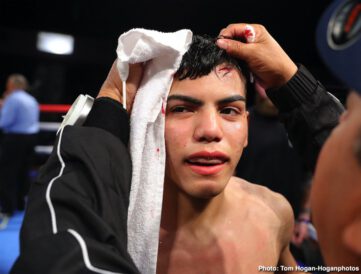 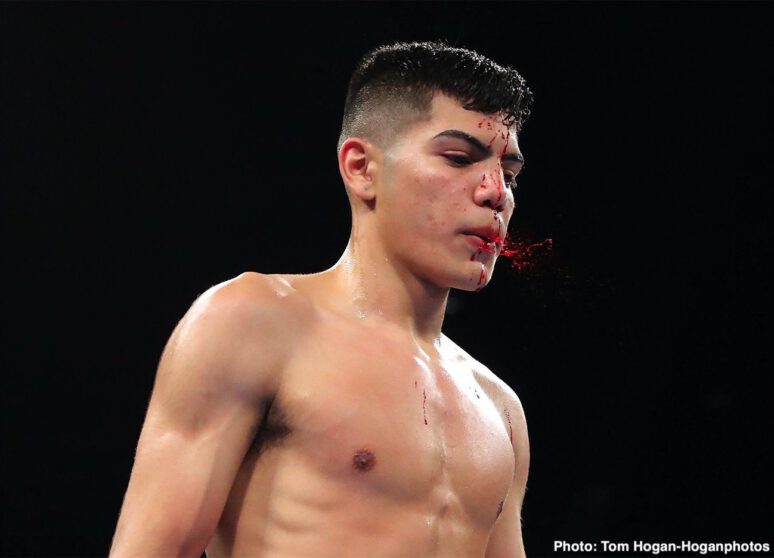 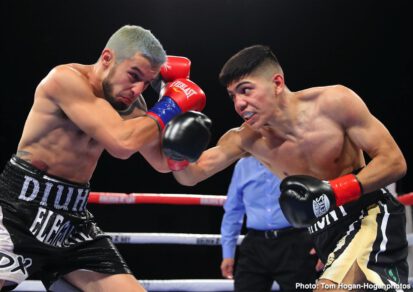 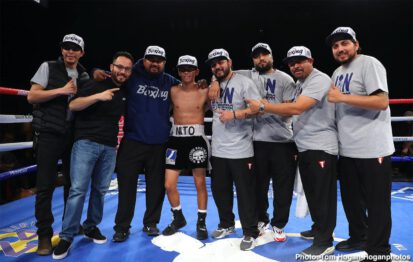 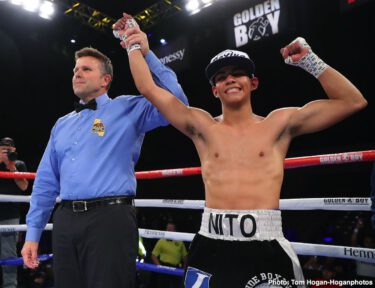 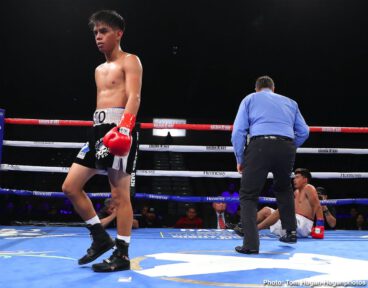 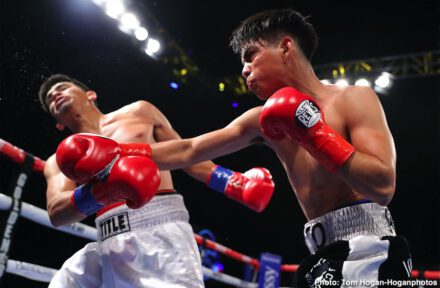 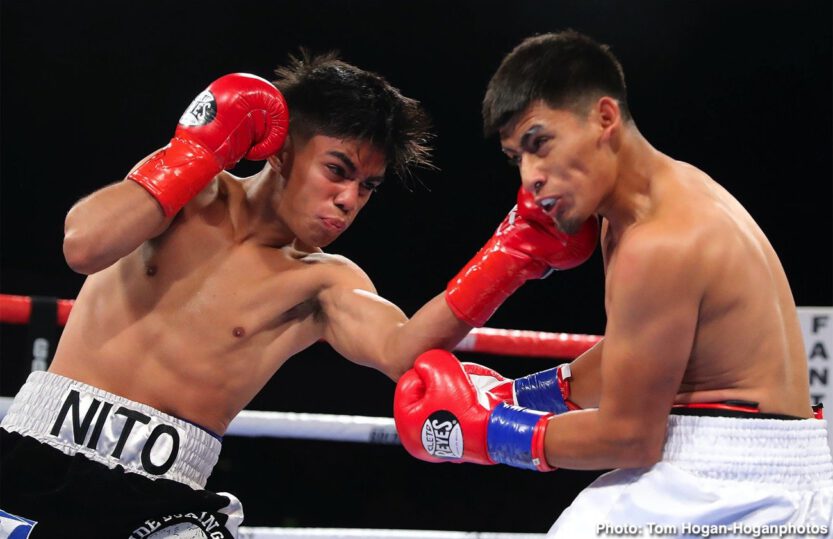 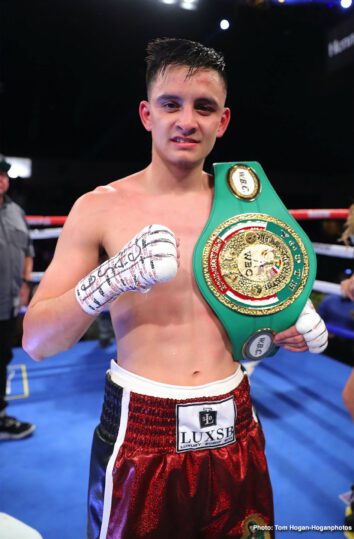 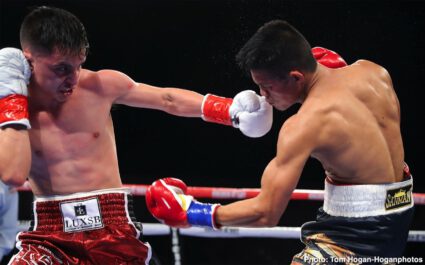 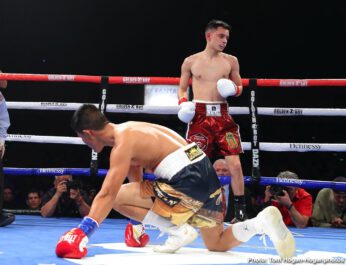 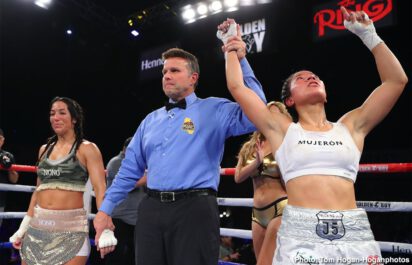 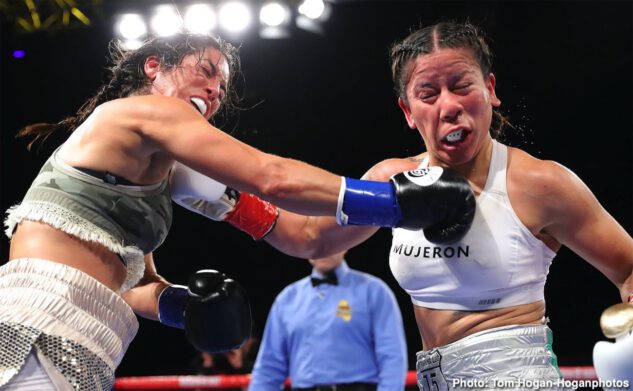 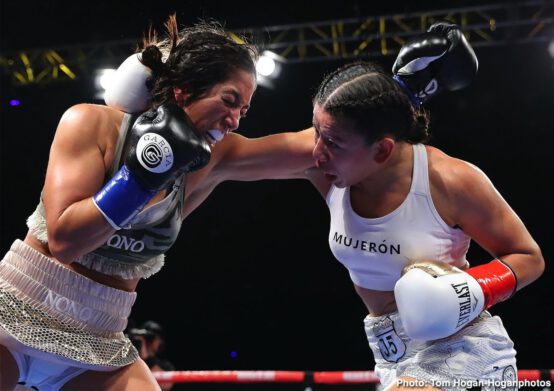