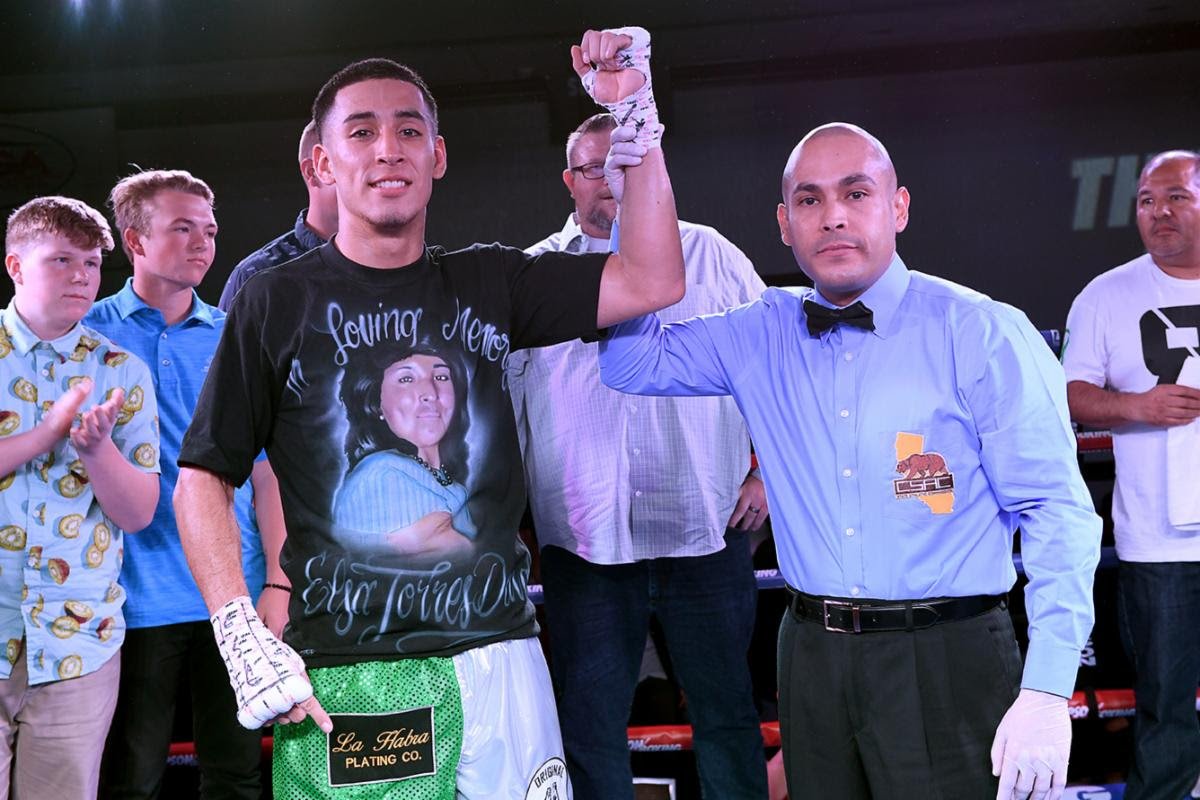 This past Friday, Thompson Boxing Promotions celebrated its 20th Anniversary in boxing with their signature “Path to Glory” event from the Doubletree Hotel in Ontario, Calif. In the main event, fan-favorite Ruben “Ace” Torres (12-0, 9 KOs) remained undefeated with a spectacular 4th round knockout over Gabino Cota (19-11-2, 17 KOs).

From the opening bell, Torres came out firing his jab while applying pressure. A looping overhand right followed by a left hook to the head sent Cota to the canvas in round one. Torres stayed poised and controlled the action in rounds two and three. In round four, Torres landed a straight right to the body and Cota could not continue. Torres scored the knockout at the 52 mark of round four.

“My opponent was a warrior and showed a lot of heart,” said Torres. “I’m gaining a lot of experience with each fight. I know he was getting uncomfortable in there when I was going to the body. Eventually, I ended the bout with a powerful shot to his ribs. I want to thank Thompson Boxing Promotions for giving me another opportunity to fight in front of my fans. I’m ready to step up and fight the best guys in my division. I believe I’ll become a world champion when the opportunity presents itself. I’m just going to keep working hard. My time will come soon enough.”

“Our 20th Year Anniversary show was a major success to start off 2020,” said Ken Thompson, president of Thompson Boxing Promotions. “Ruben Torres is a world-class fighter and I see him in big fights with all the top fighters at 135 pounds.”

“Torres showed he’s one of the brightest prospects in the lightweight division,” said Alex Camponovo, Vice President and matchmaker for Thompson Boxing. “His height and reach, along with his punching power will give anyone problems. He will soon be in a meaningful fight with a ranked opponent.

Super Middleweight Richard Brewart (7-0, 3 KOs) scored a third-round knockout against Erick Martinez (14-16-1, 8 KOs). After landing some powerful combinations, Brewart ended the bout at the 1:36 mark of round three with a strong uppercut to the head.

Super Bantamweight Ivan Zarate (2-0) defeated Ulises Gabriel (0-2) by way of unanimous decision. Zarate displayed a great body attack throughout the fight. Scorecards read 40-36 across the board.

Despite a confident and flamboyant ring entrance, Napari (now 21-1, 15 KOs) had no answers for the incredible power of Davtaev (20-0-1, 19 KOs) once the action started. The big Russian dropped Napari twice with counter right hands, the second time for good in round two.

Davtaev has been steadily improving under the tutelage of SugarHill Steward at Kronk Gym in Detroit. The already freakishly strong Davtaev has been developing outstanding boxing skills working with Steward and the difference is obvious with each passing performance.

“Apti has gained world-class skills since we’ve been working together,” said SugarHill Steward. “He is definitely ready to become a force in the heavyweight division in 2020.”

Davtaev agrees with Steward’s assessment that his time at Kronk has made him an even more formidable force.

“I am happy that my training at the Kronk Gym has been paying off,” said the 6’ 5” slugger from Mayrtup, Russia. “The goal is to continue to score knockouts and that is what I plan to do as I continue my march to the world title.”

Davtaev’s promoter Dmitriy Salita says he was also impressed with Davtaev’s latest beat down. “Apti showed impressive power and skills in dominating his undefeated foe. He is ready to beat the big names and will be a new star in the heavyweight division.”