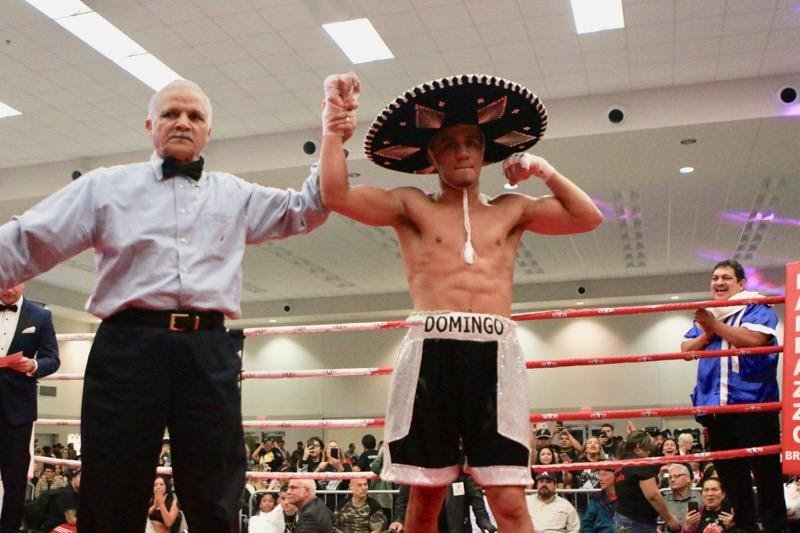 In the first round the 18-year old high school senior Medina, who resides in San Antonio, Texas, dictated the pace using his jab to set up his power shots. Casiano did his best to apply pressure throughout the fight but was unsuccessful as Medina used his superior boxing skills to counter his attack. Medina finished off the final round boxing on his toes as he cruised to victory.

“Casiano came to fight and was my toughest opponent so far in my career,” said Medina. “He kept coming forward, so I had to use my boxing ability to set up my shots. I know I’m not going to knock everyone out so going the distance for the first time was good for my confidence. I want to thank my team for all their hard work, and I can’t wait to get back in the ring.”

“Medina was spectacular and showed he can box his way to victory,” said Greg Hannley, CEO of Prince Ranch Boxing. “He had a great crowd that came up from San Antonio and all of them got their money’s worth. Medina is a rising star in this sport, and we will have him back in the ring very soon.”

“Ricky Medina has all the tools to be something special in boxing,” said Rick Morones, of TBM & PRB Entertainment who promotes Medina. “His amateur pedigree showed in this fight as he boxed beautifully for the full four rounds. He dominated this fight and we are all happy with his performance.”

“I was really impressed with how Medina handled Casiano’s pressure,” stated Alex Draghici, of TMB & PRB Entertainment. “He countered his attach with a nice jab, throwing his power shots off angles. His future is bright, and we have big plans for him.”

Cali Boxing’s undefeated super bantamweight prospect, Eros Correa (6-0, 6 KOs), scored his sixth consecutive knockout to start off his career when he stopped Jose Pech by way of a second-round knockout. The 4-round bout took place in Tijuana, Mexico and was promoted by GM3 Boxing Promotions and Gonzalez Boxing Promotions.

After a dominating first round, Correa came out with a vengeance in round two, dropping Pech twice with his signature left hook to the body. After Pech got up, Correa finished him off with a left hook to the head.

“Fighting in Mexico has been a tremendous blessing to my career,” said Eros Correa, who lives and trains in San Jose, CA. “I feel I have the power and skills to compete with anyone in the super bantamweight division. I’ll be back in the gym next week with the goal to fight next month. My team is doing a great job and soon I’ll be knocking on the door, looking for a big fight.”

“Eros is the real deal,” said Andrew Bocanegra, from Cali Boxing Management. “He’s dominating everyone that steps in the ring with him. We are working on getting him a fight in the Bay Area for his next bout. Right now, we feel Eros is the best rising prospect in the super bantamweight division.”

“This kid has tremendous power to go along with his high ring IQ,” said Jessie Sanchez, of Cali Boxing Management. “He’s developing well and I can see him in a big fight by the end of the year.”

A former WBF International Middleweight Champion, Yammouni floored Tilliot in the second round with a perfect right hand, a punch that caused the visitors left eye to close almost instantly. Tilliot beat the count, but soon realised he would not last long with one eye, and went all out trying to score a knockout.

The fight quickly turned into a brawl, but when the eye had completely shut in round three, referee Mohamed Hireche had no choice but to wave the fight off, declaring Yammouni, now 12-6 (4), the winner by technical knockout.

Thembani “Baby Jake” Mbangatha, the WBF All Africa Featherweight Champion, made a successful first defense of his title in front of a packed crowd at the Wynberg Military Base in Cape Town, scoring a unanimous decision over his best opponent to date in Doctor Ntsele.

When Mbangatha won the WBF title he did so despite dislocating his shoulder and boxing several rounds with one arm. Amazingly the same thing happened against Ntsele, the only difference being that this time the shoulder popped back in immediately.

Although many rounds in the high-paced encounter were close, Mbangatha kept his nose ahead through a better and more effective work-rate. Ntsele was always in the fight and gave his young foe a stern test, but when he tried to take advantage of Mbangatha´s injury by further upping the pace, it was too late.

Judges Elroy Marshall and Eddie Marshall both scored the fight 97-93, and Judge Fred Van der Ross had it 99-91. Mbangatha improved his undefeated record to 10-0 (4), while Ntsele, a former WBF Intercontinental and All Africa titlist, drops to 22-12-1 (14).