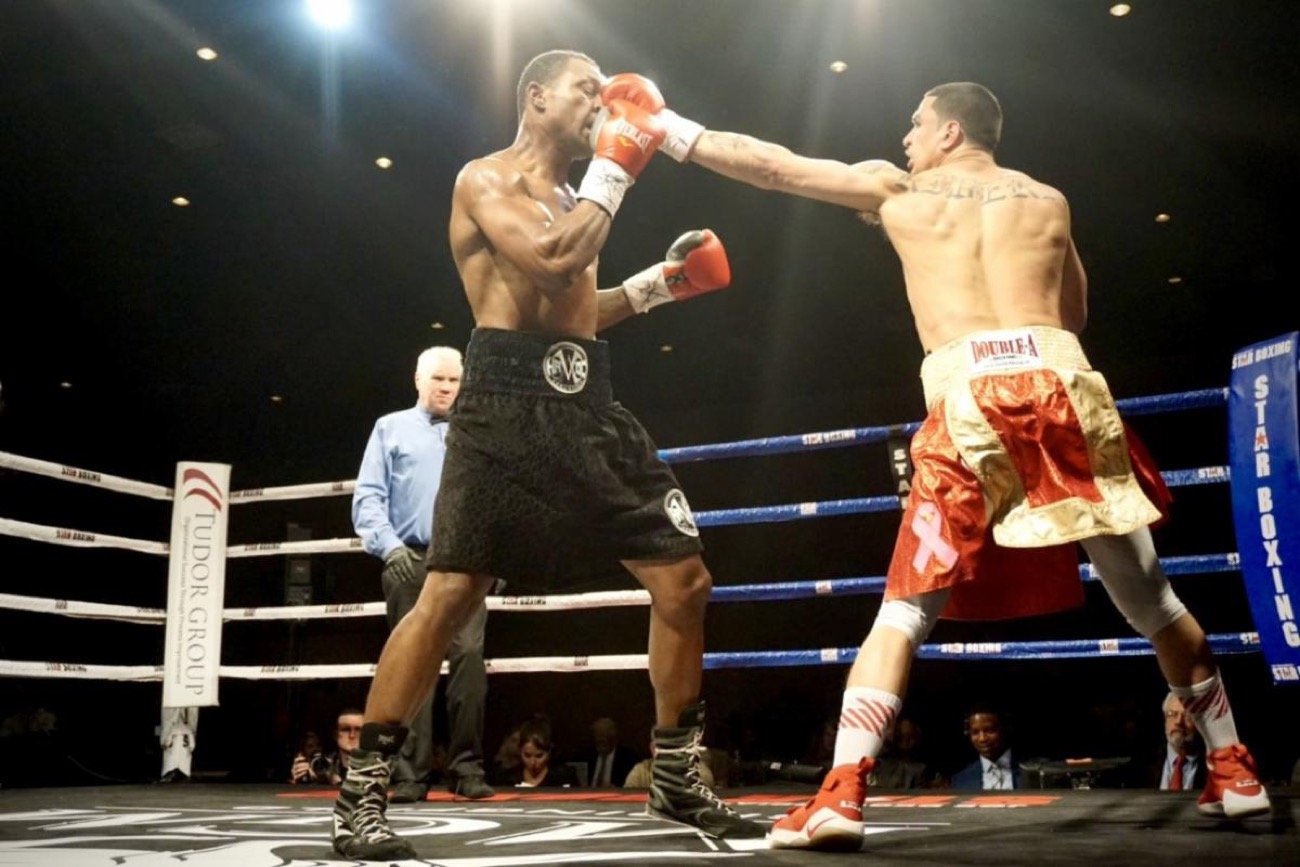 Heavy-handed Rivera (now 16-0, 12 KOs) took his power up to the cruiserweight division against “MIGHTY” JOE JONES (now 11-2, 8 KOs), who unexplainably kept his hands very low, as “Popeye” pounded him to the head and body in the main event. Rivera hit Jones with everything but the kitchen sink, in what looked like batting practice at times, although “Popeye” failed to register a stoppage for only the third time in 16 pro fights.
.
It was a rough, physical fight that got chippy early with both fighters exchanging trash talk and showboating. Rivera, who hails from Hartford, pressed the action throughout the fight against a defensive Jones, who switched to a peep-a-boo style in the later rounds.

“I’m strong to the finish because I eat my spinach….toot, toot! My coach kept telling me to relax but, honestly, I was putting on a show. More or less, I was acting,” Rivera talked about the roughhousing. “He was tough. My team said to box. The plan wasn’t to go for a knockout. I threw some big shots just to let him know.

“I’m so happy to have had my seventh fight this year. I’ve been active and I’m undefeated. I try to put on a show for the fans and be a role model.”

In the co-main event, Laureano (now 13-0, 4 KOs), a 2016 New England Golden Gloves champion from nearby East Hartford, CT., defeated Texas super lightweight ANGEL “AZTEC WARRIOR” HERNANDEZ (17-14-2, 11 KOs) in a toe-to-toe battle from the opening . This TV-friendly fight could have been fought in a proverbial phone booth. Laureano, as usual, was relentless in his attack, systematically breaking down his opponent with strong body work of his own, as well as seemingly landing uppercuts and left hooks at will.

Laureano (pictured below on the right) took control in the second and never let up against a game Hernandez, who, like Laureano, never stopped throwing punches. Eventually, Laureano won an 8-round unanimous decision in a wildly entertaining, highly competitive clash.

“It was beautiful,” Laureano commented. “I like wars, my trainers don’t. I let my emotions take over. It was a beautiful fight, though, all action and the people loved it. But I fought his fight. I did adapt and showed some of my boxing ability at some points.

“He’s experienced and came in confident. He kept coming; he’s tough. This will build me into a better fighter. I did a lot of good things. The goal is to learn from every fight, I will, and we’ll go back to the drawing board.”

Danbury, CT super lightweight OMAR “THE BEAST” BORDOY (now 10-1, 3 KOs) opened the NESN broadcast with a masterful display of boxing, winning all eight rounds on each of the three judges’ scorecards for an 8-round unanimous decision against late replacement DIEUMERCI “ELEPHANT MAN” NZAU (now 11-11, 8 KOs).

Bordoy effectively and consistently beat Nzau to the punch, moved well inside the ropes, and never put himself in dire straits. “It felt good,” Bordoy said after the fight. “The game plan was to out-box him, use my job, and not take any unnecessary chances. I followed the game plan and came out with an easy victory.

“I knew he had some power and he caught me with a good punch early. I watched some tape of him and listened to my trainers. I want to get back in the ring as soon as possible.”
In a battle of welterweight southpaws, hometown favorite DERRICK “BAD BOY” WHITLEY II (6-1-1) suffered a cut over his right eye from an accidental headbutt by JERMAINE CORLEY (3-8, 1 KO) during the second round. The ringside physician halted the action after two rounds and the fight, by rule, was a “no decision.”

Brazilian light heavyweight LEANDRO “BUSCAPE” SILVA (2-3, 1 KO) ruined the homecoming for local fighter ANGEL ‘ THE BLACK RICAN” VAZQUEZ (0-2) In the walk-out bout, Silva trapped Vazquez on the ropes in the fourth round. Vazquez suffered a standing eight count, but the referee halted the action, and awarded Silva a win by technical knockout.

Complete results and more pictures below: