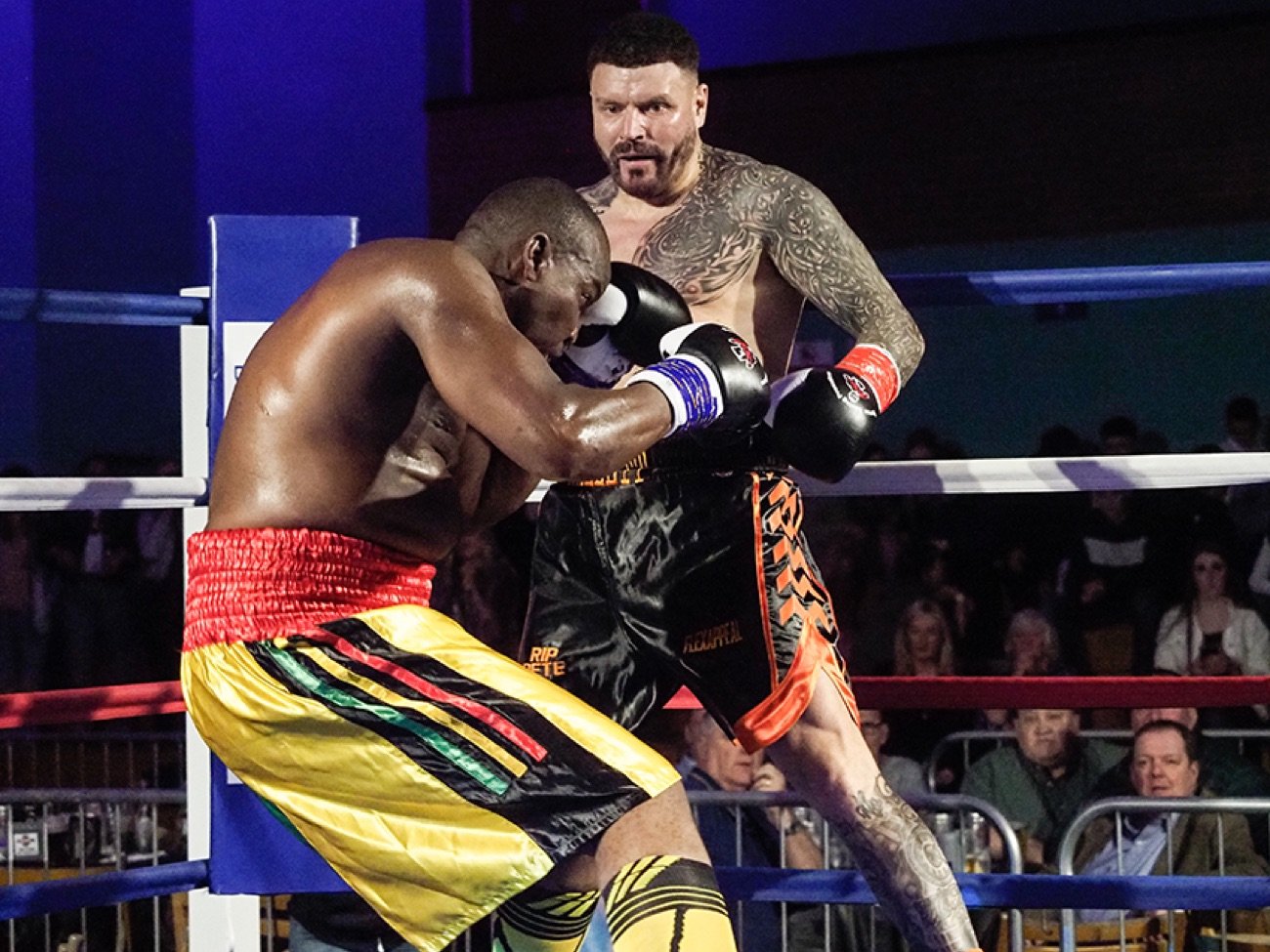 On Saturday night Cumbrian fans of the pugilistic arts packed the Hoops Basketball Centre in Barrow-in-Furness to support local heroes Lee Kellett and Callum Pearson, as they co-promoted their first professional boxing event, which they also co-headlined.

Both protagonists were cautious in their initial approach, both working hard behind their jab, testing the other’s mettle with crisp fast flurries. As the round progressed Addy began to load more power into her shots, which in turn led to Hopewell returning equally powerful shots and for the rest of the round the pair entertained the assembled crowd with some sensational boxing.

Hopewell comes out hard and fast in the second, soon backing Addy into a neutral corner before letting rip with both hands, Addy initially began to fight her way out from the corner but Hopewell had an answer for everything the Ghanaian threw at her and kept forcing her backed up against the ropes before letting rip with a peach of a head-shot to send Addy crashing to the canvas.

Hopewell’s power in that shot proved too much for the tough Ghanaian, who was unable to rise to her feet before Referee Lee Murtagh’s count reached its conclusion. Official time of stoppage just Twenty Seconds of the Second Round.

Next up was Orkney based Liverpudlian Paul Peers (6-4-0) challenging Nicaragua’s Milton Arauz (10-2-1) for the Professional Boxing Council (PBC) Welterweight International Championship, Arauz was a late replacement for Craig Kennerdale, who pulled out due to illness just two days before the event.

More of the same in the second, much to the delight of those ringside, it was a cracking all action round, however Peers stepped up the pace and power in the third, backing Arauz up on numerous occasions and letting rip with rib breaking body-shots. Arauz is a tough as they come but the power-shots to the body was forcing him to cover up more and countering when the opportunity presented itself.

Peers just kept up the pressure and eventually got his reward, sending Arauz down. The tough Nicaraguan took to his knee and got his breath back before raising to his feet as Referee Lee Murtagh’s count reached seven.

Peers went straight on the attack once more, Arauz fought hard to keep the marauding scouser at bay, however in the dying seconds of the round the power of Peers’ body-shots once more troubled the Nicaraguan, who went down for the second time. Again he rose in time and managed to make the end of the round before Peers could really punish him once more.

Peers strode confidently on the opening bell for round four and proceeded to load up his shots, Arauz fought back magnificently but to no avail as Peers switched from Body to Head before letting rip with a massive hook that sent the Nicaraguan down hard, Referee Lee Murtagh was quickly down checking that Arauz was OK and then waved the fight off and called for the Ringside Doctor.

The crowd cheered as Arauz rose to his feet, a little wobbly on his feet but clearly OK. Official time of the KO was 41 seconds of the Fourth Round.

On the opening bell Azuma shot across the ring and began letting rip with massive shot after shot, Kellet’s excellent ringcraft prevented any of the Ghanaians Exocets catch him flush on the head initially. Kellett then calmly worked behind his jab for ten seconds or so until Azuma landed a big shot, the Cumbrian shook it off and responded with a big shot of his own, then another which sent Azuma down.

Azuma rose in plenty of time and went straight back on the attack, once more Kellett’s ring craft and calm approach kept him out of too much trouble. Kellett then started backing up the Ghanaian before letting rip with another massive shot to send Azuma down. As before the Ghanaian beat the count but on rising looked a little unsteady, on the restart Kellett went hard on the attack again, this time opening up the Ghanaians tight defence with relative ease, then as the fight headed towards the final seconds Kellett fashioned and opening and let rip with a pinpoint perfect right to send Azuma down for a third time, again the seriously tough big Ghanaian rose to his feet in time, but was so unsteady on his feet that referee Lee Murtagh had no option but to stop the fight. Official time of stoppage Tow Minutes and Forty-Nine Seconds of the first round.

What an absolutely sensational Battle Royale this contest proved to be, it was an all action war for every single second of every single round. It made me think back and compare it to the original Graham Earl versus Michael Katsidis Battle Royale in 2007 and bear in mind that went just four rounds, this phenomenal fight somehow went the full ten rounds, yep it was that sensational.

Right from the opening bell both protagonists went in hard and fast, the initial toe-to-toe exchanges were intense, however these warriors slowed the pace a tad and then got down to serious controlled boxing, with both men digging deep into their arsenals to try and find that perfect shot that’s finish the fight.

Each round was very closely fought, with control switching back and forth every few seconds or so. In the early rounds Pearson’s excellent ringcraft kept him slightly on top but as the fight began heading into second half of the fight Aduku began to land more and more shots, so much so that during the seventh stanza it looked like the Ghanaian was going to stop the Cumbrian, however Pearson is as tough as they come and absorbed some serious punishment before coming back strong in the later stages of the round.

The final rounds were so intense, everyone in the house was on their feet urging Pearson to finish Aduku off, the plucky lad tried, boy oh boy he tried, but soon realised that the big shots were draining him more than the Ghanaian so soon just got back to boxing – I have to admit at times it was breathtaking to watch.

After ten absolutely sensational rounds of boxing the judges scorecards were read out, these were: Edward Law 98-92, Ian Longstaff 99-91 and David McDonald 98-95. I cannot argue the scores one iota but the current scoring system just doesn’t reflect how close many fights are, and have to say this is one they definitely don’t, each round was close, it must have been a nightmare for the judges.

What a fantastic night of boxing, if this is the level of fare that Lee Kellett and Callum Pearson and their Barrow Boxing Promotions are going to serve, what can I say I for one will be envious of the boxing fans in the North West, getting to watch such well matched all action fights locally.