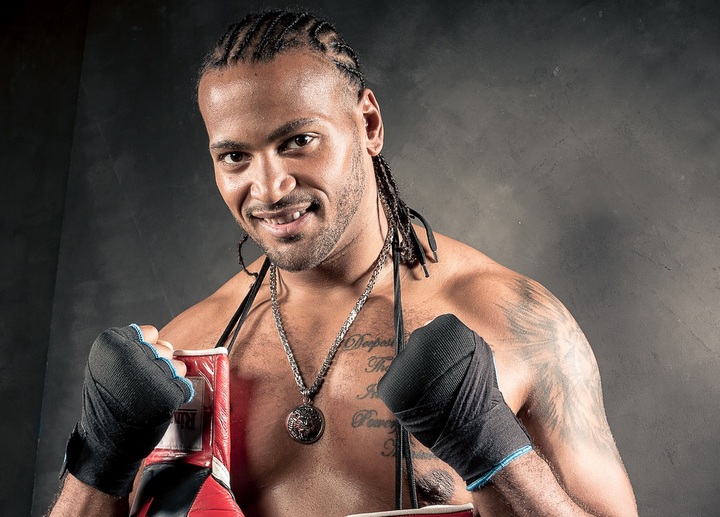 A scintillating evening of entertainment at Ultimate Boxxer 6 saw Nick ‘Wild’ Webb crowned champion in the first ever heavyweight tournament, receiving the Golden Robe and a share of the £50,000 prize money.

Webb, saw off Yorkshire hardman and former soldier, Mark Bennett in a thrilling final bout, with Webb coming out on top on points in front of a sold out and electric crowd in Manchester and live on BT Sport.

The Chertsey star, who is managed by former British and Commonwealth Heavyweight Champion Scott Welch, overcame local lad Chris Healey in the quarter-finals, before seeing off the impressive Danny Whitaker, who stunned almost everyone when he took out the bookies favourite Jonathan Palata in the quarter finals.

Meanwhile Bennett’s route to the final saw him take part in two brutal fights. The quarter-final victory against Scotsman Jay McFarlane came on points before an exhilarating bout with former Huddersfield Giants rugby league player, Josh Sandland. The semi-final clash between the two Yorkshiremen had the crowd on their edge of their seats with the pair trading huge punches throughout the fight.

On the undercard ahead of the final, Florian Marku whipped the crowd up into a frenzy with his unanimous victory over Nathan Bendon, which delighted the strong Albanian contingent and Arsenal and Switzerland football star Granit Xhaka. The bout certainly left the stage set for a pulsating final between the two heavyweights.

Commenting on the victory, Webb said: “It’s been a tough tough year, for me, my family, my fiancé, but this makes it all worthwhile. I’m lost for words. I’ve been through it all – to hell and back but to win the Golden Robe is amazing. It’s just the start for me though. I’m going to enjoy Christmas big time, but watch this space”

Cruiserweight sensation Sam “The Vanilla Gorilla” Crossed of Greenbelt, Maryland, was triumphant in his first fight after a year long layoff on December 14, 2019, in Tysons Corner, Virginia. Crossed sailed to a four round shutout unanimous decision over 37 fight veteran heavyweight Michael Davis of Cincinnati, Ohio. The unbeaten Crossed improves his record to 9-0, with five knockouts to his credit.

Crossed, who had multiple fights fall out over the last 12 months, was ecstatic to be able to once again ply his trade in the squared circle.

“It was nice to finally get some rounds after the year I’ve had,” Crossed said. “The game plan was to step it up every round, which I feel like I did.

“I wanted to take my time and break him down, but in a four rounder that can be tough sometimes.”

Crossed doesn’t plan to stay on the shelf very long. He looks to return to the Baltimore-Washington Region in the first quarter of 2020.

“We are just waiting on the contract for my next fight,” the Maryland native expounded. “I can’t wait to announce my next opponent and the venue.

It’s going to be my first 10 round fight against and big step up in caliber of opposition; A win like this would do wonders for my career.”

Crossed and his team hope to be able to make an announcement in the next week or two with regards to his next fight.

Bormann had a little too much in the bag for gritty and game challenger Lotta Loikkanen from Finland, as she scored a unanimous decision in the main event of a big show at at the traditional Christmas Circus in Karlsruhe.

The fight was promoted by Thomas Schwarz and his TS Fight-Sportmanagement.