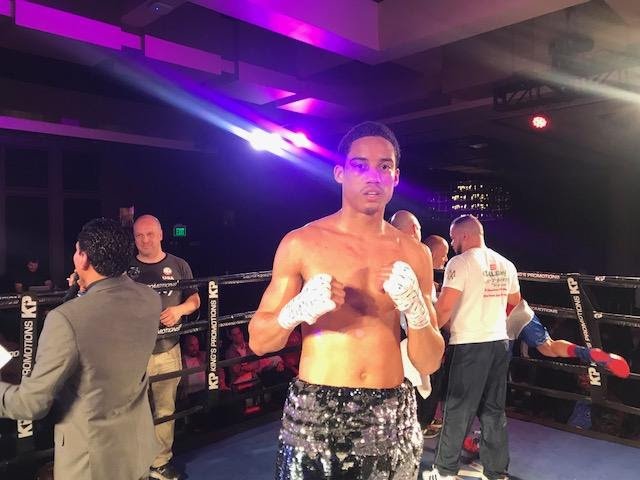 The bout headlined an eight-fight card at SugarHouse Casino, and was promoted by King’s Promotions.

Fox of Forestville, Maryland controlled the action by using his long reach that set up combination punching. The 22 year-old was solid throughout, and cruised home to the victory by scores of 79-73 twice and 78-74.

“The Fighting Ring Announcer” Alex Barbosa came back after a nearly two-year layoff to win a four-round unanimous decision over Sergio Aguilar in a super bantamweight bout.

Romuel Cruz bloodied the nose of Bryann Perez on his way to a four-round unanimous decision in a super bantamweight bout.

In round three, Kizito landed a straight left that made Yusunov’s glove hit the canvas. It was Yusunov’s power shots that bloodied the nose of Kizito, and was the difference in the fight.

Jerrod Miner and Desmond Moore battled to a four-round split draw in a bantamweight contest.

In the fight of the night, Joshafat Ortiz got off the deck in round one, to come back to stop Jordan Peters in round two of their scheduled four-round super featherweight bout.

Peters dropped Ortiz in the first frame with a vicious right hand. Ortiz was not only able to shake that off, but come back and land a booming right hand that dropped Peters in next frame. Peters got up, but ate a huge combination, and the fight was stopped at 2:13.

Michael Coffie remained undefeated by stopping Lamar Lewis in the first round of their scheduled four round heavyweight bout.

Coffie landed a big combination to the top of the head that sent Lewis down, and the fight was stopped 75 seconds into the fight.

Coffie of Brooklyn is 3-0 with 2 knockouts. Lewis of Conway, Arkansas is 0-2.