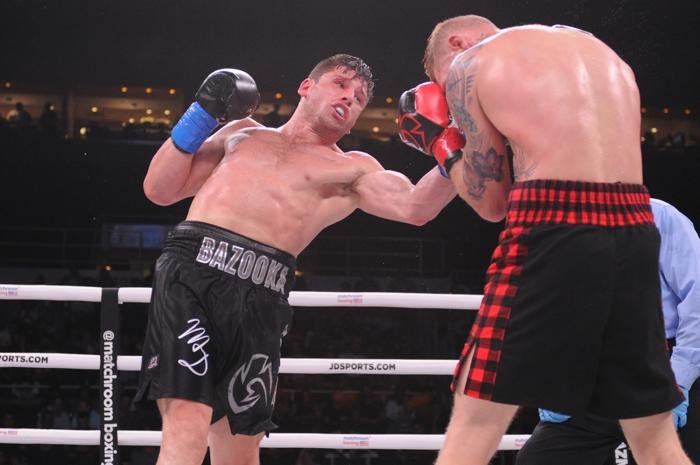 Murphys Boxing’s Mark DeLuca (24-1, 13 KOs) won a unanimous decision over Brandon Brewer (23-1-1, 11 KOs) on the undercard of Andrade vs. Sulecki which was broadcast live on DAZN from Providence, Rhode Island.

Brewer, who went into the fight undefeated, proved to be a game opponent and made for some exciting exchanges between the two fighters but ultimately the Canadian couldn’t find an answer for DeLuca’s wide array of skills.

“It was a physical fight. I wanted to box. I felt like I could out box Brandon but I got caught up in the excitement. I said going into the fight that we were gonna steal the show and that’s what I had in mind. He was bleeding. That turned me on. I saw that I was bleeding a little and that turned the crowd on. Made for an exciting fight.”, said DeLuca who is the current NABA Super Welterweight Champion and ranked #9 in the world by the WBA.

“This is my second time fighting on a DAZN card and I’m here to call out one of the biggest names in boxing and that’s Eddie Hearn. He’s got a lot of the top super welterweights over in England and I’m more than game if he would consider me to fight them.”

As for the massive turnout from his fans who traveled down to Providence to pack the Dunkin’ Donuts Center early in the night, the Whitman, Massachusetts native, who has become arguably the biggest draw in New England, was all thanks.

“I took this fight on two weeks notice cause it was a great opportunity and you saw the crowd that came out. I’d be teaching tae-bo if it wasn’t for everyone showing up here tonight and I appreciate it very much.”

Ken Casey, Murphys Boxing founder and Dropkick Murphys frontman, watched the fight while on tour in Germany and was naturally excited about his fighter’s dominant performance.

“I was very proud of Mark DeLuca tonight. I thought he looked extremely sharp in what was a big win against a 23-0 opponent.”

As for his next fight, Casey is on board with DeLuca’s desire to face another Top 10 ranked fighter on either side of the Atlantic.

“Murphys Boxing is working on securing a major fight for Mark this year against another Top 10 contender. The goal is for Mark DeLuca to become Boston’s first world champion in over 15 years.”

This past Saturday, Cali Boxing Management’s super bantamweight prospect, Eros Correa (8-0, 6 KOs), remained undefeated with a unanimous decision victory over Javier Miranda. The 6-round bout took place at the Big Punch Arena in Tijuana, Mexico and was promoted by GM3 Boxing and Gonzalez Boxing Promotions.

“This was my first six round bout and I got some good rounds in,” said Eros Correa, who was an alternate on the 2012 Olympic team. “I went the distance with ease and now I’m ready to step up to bigger fights. I want my next fight to be eight rounds our more. I’m in the prime of my career and now it’s time to step it up. I’ll be back in the ring next month.”

“Eros showed he can go past four rounds and now we will see about putting him in an eight rounder in his next bout,” said Andrew Bocanegra, Correa’s co-manager. “He’s starting to build a nice fan base in Mexico and soon enough it will be that way in the States. We’re going to keep him fighting frequently with the hopes of landing a big fight.”

“Eros is looking better and better with each fight,” said Correa’s co-manager Jessie Sanchez. “Fighting in Mexico has been a big help for his career since it’s very difficult getting him fights in the United States. He’s starting to make a name for himself and sooner then later he’ll be in a big fight with a title on the line.”