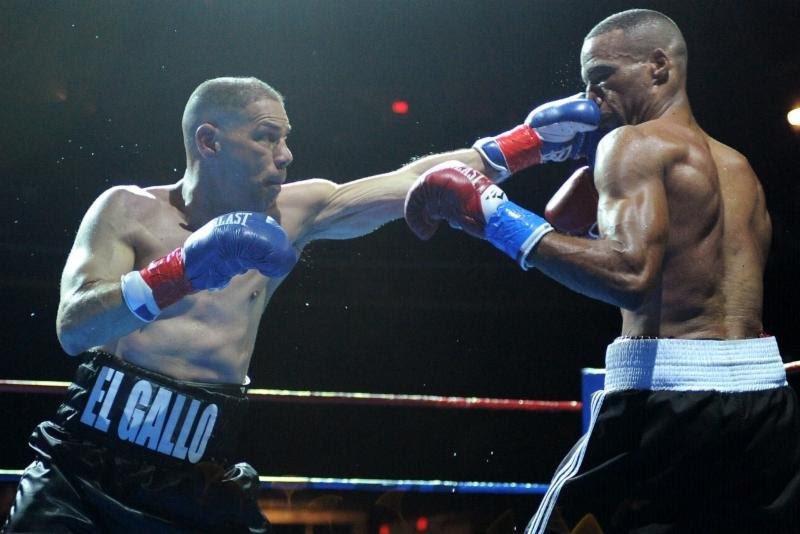 The 46-year-old Rivera fought professionally for the 50th and final time, at home in “Quest For 50,” presented by Shearns Boxing Promotions and Rivera Promotions Entertainment, Rivera (43-6-1, 25 KOs) stalked his elusive opponent, cutting off the ring and firing punches to the head and body of 38-year-old Scott (19-6, 5 KOs). His aggression, guile and the same determination and displayed throughout his career.

The only knockdown of the fight came near the end of the fifth round, when Scott caught Rivera with a right on the top of the head. The three judges scored the fight: 77-74 and 76-75 for Rivera, 76-75 for Scott.

“I thought I was winning the fight,” Rivera aid after the fight,” but I felt that I had to put my punches together in the last few rounds. It was a flash knockdown; I wasn’t hurt at all. It all comes down to training. I tell young fighters to train, train, train until they’ve given 100-percent and train a little more. I was the busier fight and kept throwing multipole punches to his one at a time.

“This was definitely my last fight. It’s time for my new career. (Rivera was recently promoted to Associate Chief Court Officer.) Every time you go into the ring, you want to win, especially the last one. It was great to win my last fight in my hometown of Worcester.”

Rivera lost 40-pounds in five months to prepare for his fight. He improved his pro record in Worcester to 15-1 (6 KOs).

In the co-featured event, New England middleweight champion Kendrick “Peppa” Bell, Jr. (13-1-2, 9 KOs), another Worcester fighter, got into a rough firefight with the unorthodox Honduran super middleweight Juan Celin Zapata (6-15-2, 4 KOs) in a non-title fight. Ball floored Zapata twice in the opening round, once in the second, and three times in the third. Referee Paul Casey called off the fight after the seventh final knockdown in round three.

Worcester favorite Owen “The Problem” Minor (2-0, 2 KOs, arguably the most promising Massachusetts-born heavyweight prospect of this century, needed only 31-seconds to take care of pro-debuting Jpseph Raposo (0-1), knocking him out with a single left hook.

The New England junior welterweight title remains vacant, because the fight between Sydney “Keelo” Maccow (6-8, 3 KOs) and Anthony Everett (1-7, 1 KO), on the advice of the ring physician Dr. Peter Warner, their fight was stopped after two rounds due to a massive hematoma on Everett’s forehead, resulting from an unintentional headbutt.

Hartford welterweight “The Special One” Sharad Collier (2-0-1, 2 KOs), a two-time New England Golden Gloves champion, overwhelmed his opponent, Bruno Dias (0-8), knocking him to the canvas three times. The last trip resulted in referee Kevin Hope waving off the fight with 30-seconds left in round one.

Worcester junior lightweight Philip “Rock Solid” Davis (2-1-1, 1 KO) and Henry Garcia
(0-3-1), from New Bedford, MA, put on quite a show, pounding each other from the opening bell until the final whistle in a very entertaining match. Davis won each round on all three judges’ scorecards for a win by way of a four-round unanimous decision.

Providence welterweight Elijah Peixoto (1-0, 1 KO) turned in a superlative pro debut, dropping Carlos Galindo (1-12) three times in the opening round and twice in the second, the last with a vicious body shot after which referee Hope immediately halted the fight.

A portion of the proceeds benefited the Worcester Boys & Girls Club.