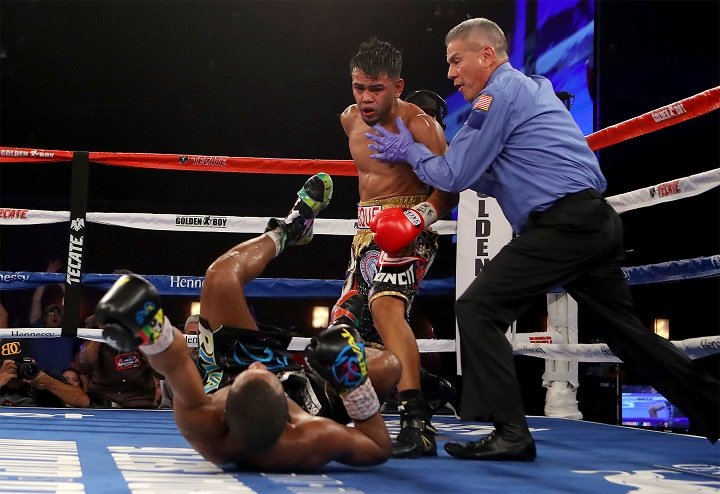 On the eve of the most important night of boxing, Jesus Rojas (26-1-2, 19 KOs) of Caguas, Puerto Rico captured the WBA Interim Featherweight title with a stunning seventh-round knockout victory against Claudio Marrero (22-2, 16 KOs) in the main event of Golden Boy Boxing on ESPN at the MGM Grand Marquee Ballroom in Las Vegas. Rojas pressured Marrero in each and every round of a back-and-forth fight. Eventually, Marrero succumbed to Rojas’ power after a series of counter-punches, culminated by a left hook, ended matters at 2:59 of the seventh round.

“I’m super happy and super emotional,” said Jesus Rojas. “I want to thank Roberto Diaz and the entire Golden Boy team, my family and my kids. This is the joy of many years of sacrifice and many fights that have been taken from me. I promised my father that I would get a title one day, and even though he is no longer with, my promise to him is complete. We knew that he [Marrero] was going to be aggressive and we purposely worked on our counter-punching, and that was what did the trick.”

In the exciting co main event of the evening, Victorville, California’s Ryan “Kingry” Garcia (11-0, 10 KOs) blasted Miguel Carrizoza (10-3, 2 KOs) via first-round knockout in a scheduled eight-round fight to capture the Junior NABF Super Featherweight title. In the opening seconds of the fight, Garcia hit Carrizoza with a hard right hand that immediately dropped him. Carrizoza got up before being counted out, but only to be greeted with a lead left hook that ended matters immediately at 30 seconds of the first round. Rashidi “Speedy” Ellis was originally schedule to take on Juan Carlos “Merengue”Abreu in the co-main event, but was forced to pull out due to a health issue.

“I am just happy!,” shouted Ryan Garcia. “When I took the fight, I actually thought it might be a bit challenging since he had never gotten knocked out. Within seconds of the bout starting, I realized that the guy wasn’t going to touch me. Hopefully now with this title I’ll be able to take on some even tougher fights!”

Alexis Salazar (12-3, 3 KOs) of Tlaquepaque, Mexico scored a six-round unanimous decision victory against Even Torres (6-5, 5 KOs) of El Paso, Texas in the televised swing bout. Salazar and Torres engaged in a bath-and-forth fight in which Salazar’s footwork and boxing skills allowed him to prevail with scores of 59-55, 58-56, and 60-54.

“My performance was okay tonight – I wasn’t as explosive as I wanted to be,” said Alexis Salazar. “I wish I would have paid more attention to my corner, I could have gotten the knockout. My opponent was able to put a lot of pressure, and he never got tired. Training with Canelo was such a privilege – I was able to learn what it takes to be a champion.”

Philadelphia’s Damon “No Smilin'” Allen Jr (13-0-1, 5 KOs) opened the ESPN transmission with a dominant unanimous decision victory against Jayro Duran (10-3, 9 KOs) of San Pedro Sula, Honduras in the super lightweight division. Though Allen was deducted a point in the second round for hitting below the belt line, he was dominant in his victory, landing short shots around Duran’s guard to hurt him in every round. Allen won with three scores of 79-72.

“This is just another win to add to my record,” said Damon Allen. “I brought the most ring savviness, power, and control into the fight. I felt like the referee kept interrupting my rhythm, and kept calling my body shots low blows and I still lost a point for it. This is my third fight this year, so I hope I get to fight again in December for a title.”

In the first bout of the evening, Horacio “Violento” Garcia (33-3, 1 22 KOs) of Guadalajara, Jalisco, Mexico scored a fourth-round technical knockout victory against Diuhl Olguin (11-7-2, 9 KOs) in a scheduled eight-round super bantamweight fight. The bout was a rematch of a bout that Olguin won via unanimous decision in July. This time, however, Garcia won decisively, dropping Olguin in the fourth round with a left hook before stopping him with a flurry at :44 of the same round.

“I’m very happy,” said Horacio Garcia. “I’m very grateful for all the people, the fans who support the Mexican fighters, Golden Boy Promotions, and my team. I really wanted to fight him [Garcia] again because I know that the first time there were things that happened that didn’t allow me to go into that fight well. But today the hard work was carried out well.”

Marrero vs. Rojas was a 10-round featherweight fight presented by Golden Boy Promotions in association with TGB Promotions. The event was sponsored by Tecate, BORN BOLD; Hennessy, Never Stop, Never Settle; and Interjet.