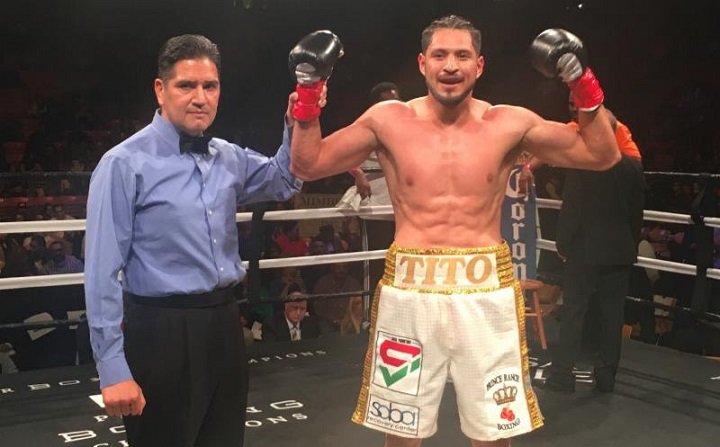 Velazco, who hails from Aguascalientes, Mexico, rallied from an early first round knockdown, which was more of an off-balance circumstance. Velazco wasn’t hurt and evened the score in the second round with his own knockdown, catching Williams with a short right to the face, a punch he didn’t see coming. Williams survived the round but was walking on wobbly legs. Now in a rhythm, Velazco’s timing was on point as he sent Williams to the deck for the second time in round three, this time hurting him badly with combination of punches. Williams survived once again only to be stopped in round four when Velazco, a heavy-handed southpaw, blasted him with a straight left, forcing the referee to stop the bout at the 1:37 mark.

“It was a great feeling to get a knockout in my first fight in the united states,” said Humberto Velazco, who is managed by Greg Hannley of Prince Ranch Boxing. “When I got up from the knockdown I wasn’t hurt, but it definitely woke me up. When I dropped Williams, I knew he was hurt, but the round ended. I knew I had to step it up and I got him out of there. I’m ready to fight all the big names at light-heavyweight and super-middleweight. Adonis Stevenson, Sergey Kovalev, Dmitry Bivol and Artur Beterbiev are at the top. I want their belts, so they are on my target list.”

A genetic freak, Velaszco stands slightly over 6″1, and has a rare combination of speed and power. His athletic pedigree runs in the family as his brother is a professional basketball player.

“When I first saw Velazco in the gym, I knew he was something special,” said Oscar Vazquez, CEO of Sugar Promotions. “He has great feet for a big man and showed he can bang with the best of them. I’m very grateful to the folks at PBC, who gave us the opportunity to fight on this card. I believe Velazco will be the next big star to come out of Mexico.”

“Velazco is a super athletic fighter with a great personality.” said Prince Ranch Boxing’s Greg Hannley. “His final knockdown was amazing. We have big plans for Tito and everyone on boxing will know his name soon.”

Velazco vs. Williams Jr. was showcased on the PBC card headlined by Victor Ortiz vs. Devon Alexander. Look for Velaszco to be back in the ring by summer, most likely in his hometown of Aguascalientes, Mexico.