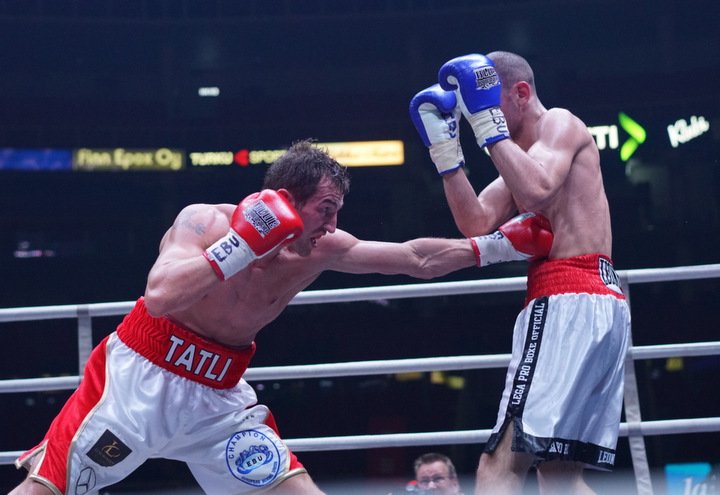 The Gatorade Fight Night event in Turku, Finland, ended in an upset as Francesco Patera (18–2) won the EBU lightweight title from Edis Tatli (29–2) by a somewhat contoversial split decision. It was an even fight with Patera being the more active of the two and Tatli scoring the harder shots.

Neither fighter did significant damage in the opening rounds, but Tatli’s right hand started to find its way in the fourth. Patera was the sharper of the two in the fifth, but Tatli took control in the sixth blocking Patera’s punches and throwing his own shots after Patera’s combinations.

In the eighth Tatli got in some nice left hooks. Patera scored with a hard uppercut in the beginning of ninth, but Tatli answered later with a good overhand right.

Neither fighter showed signs of slowing down in the championship rounds. Patera scored more in the tenth, but Tatli closed the round strong. Tatli took the eleventh with several big shots and the final round was a close call. The official scores were 113–115, 112–116, 116–112 for Patera.

The WBC World super featherweight champion Eva Wahlström (20–0–1) retained her belt with a unanimous decision over Mayra Alejandra Gomez (18–6). Wahlström peppered the much shorter Gomez with one-twos, hooks and crosses throughout the opening rounds. The tough Argentinian showed heart and caught Wahlström with a good overhand right in the fifth, but the champion answered with stiff jabs and good left hook–right cross combinations.

Wahlström controlled the center of the ring throughout the fight, but Gomez managed to get in some solid counters. The champion stunned Gomez in the end of eighth with a hard right, and the final round was a slugfest as both women threw bombs.

Light heavyweight Niklas Räsänen (14–1) scored a clear unanimous decision over Ricardo Marcelo Ramallo (22–12–1). The two started cautiously, but things started to heat up in the second as the southpaw-stanced Räsänen knocked Ramallo down with a booming left hand.

Räsänen staggered Ramallo again with a beautiful right uppercut in the third round. Ramallo came back in the fourth with a few good shots of his own, but in the fifth Ramallo went down twice from slips but was clearly tired and took several hard shots. In the end Räsänen won every round with ease.

Sasa Janjic (6–15) had little to offer against Oskari Metz (3–0) in their welterweight clash. Metz peppered the southpaw-stanced Janjic with hard right hands for the first three rounds. In the second round Janjic looked like he was ready to go down, but Metz wasn’t able to land the final punch.

In the fourth round Janjic tried to turn the tables with hard left hooks to body and head, but as Metz continued to press forward the awkward-styled Serb switched back to defensive mode. Janjic scored with a few good uppercuts and left hands in the fifth but was again in trouble in the final seconds of the round. Metz tried relentlessly score his first knockout in the sixth, but the sneaky Serb made it to the final bell.

Welterweight Nerdin Fejzovic (2–10) started courageously against the much more experienced Jussi Koivula (22–4–1) and even managed to catch him with a big right hand in the first round. Koivula answered by nearly knocking Fejzovic down with a right hand if his own.

Fejzovic’s best weapon was his wild right hand swing that was hard enought to keep Koivula from going after him too recklessly. Things started to look bad for Fejzovic in the third as Koivula rocked him again with a sharp right. Fejzovic started clinching excessively, which raised some boos from the audience.

Super bantamweight Jose Antonio Sanchez Romero dominated Nemanja Sabljov in a six-rounder. Sabljov seemed to get in the fight early on, but a hard right from Sanchez sent him down in the final seconds of the first round. Sabljov lost his will to fight right there, and for the rest of the fight he contentrated on clinching and evading Sanchez’s atttacks.

Sanchez tried desperately to finish his opponent before the final bell. He managed to knock Sabljov down in the final seconds of the sixth, but the Serb was saved by the bell.

Antti Hietala (1–0–1) scored a unanimous decision against Predrag Cvetkovic (1–6) in a welterweight contest. Hietala moved well and got in some good combinations downstairs in the first round, but Cvetkovic wasn’t going to give in easily. The Serb pressed on, but Hietala was too slick. In the fourth round Hietala hurt Cvetkovic with hard body shots, but Cvetkovic managed to stay on his feet.