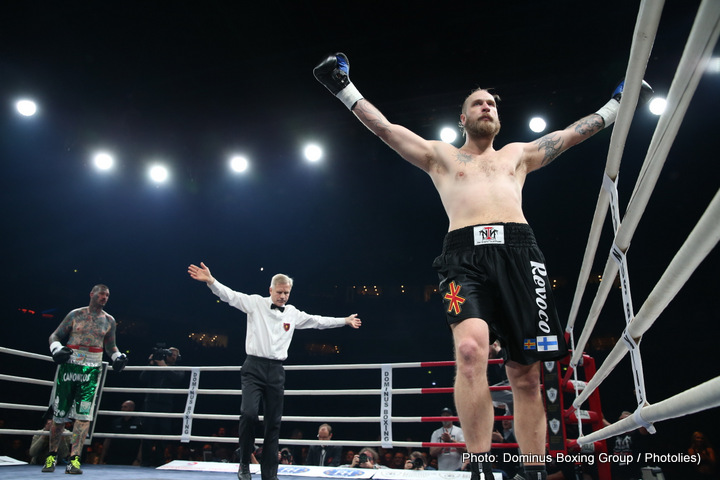 EBU lightweight title fight between Edis Tatli (29–1) and Manuel Lancia (14–2–1) turned out to be a long and painful one for the challenger. Tatli used his reach advantage masterfully and neutralised Lancia’s attempts to get close.

Tatli used a wide range of uppercuts, hooks and crosses to keep his opponent at bay. Lancia simply had no tools to catch the champion. The Italian’s best weapon was his overhand right that found it’s target a few times over Tatli’s left hand.

Lancia was cautious early on, and as he became more aggressive he gave Tatli more openings to cause damage. By the end of sixth Lancia’s face was a bloody mess and his left eye swollen shut.

Lancia went down three times in what were ruled as slips. Doctor looked at Lancia’s wounds in the seventh but allowed the fight to continue. In the ninth exhausted Lancia stopped throwing punches and the referee stopped the fight. Time was 1:57.

After the fight there was a rather special event in the ring: the bloodied Lancia proposed his fiancee, and the bride-to-be answered “yes”. So the evening turned out to be a good one for the persistent Italian after all.

Eva Wahlström (19–0–1) promised that she would show Anahi Sanchez (14–1) who’s the boss in Helsinki. This proved to be true as the WBC super featherweight world title fight turned out to be an action-packed slugfest.

Sanchez came in strong early on and gave Wahlström hard time with her right hand. Wahlström blocked Sanchez’s body punches and scored with hooks of her own before moving out of the way. By the fourth round Wahlström seemed to have Sanchez figured out as the champion’s punches found their mark much more often than the challenger’s.

Sanchez came back in the sixth wobbling Wahlström with a right hook to the chin. Sanchez continued to mount pressure on Wahlström until the champion caught the Argentinian with a good one-two in the end of the seventh. Wahlström was stronger in the eighth and snapped Sanchez’s head back with a stiff jab in round nine. The fighters went through tough exhanges right until the final bell. The scores were 98–92, 97–94 and 97–94 for Wahlström.

The heavyweight fight between Robert Helenius (24–1) and Gonzalo Omar Basile (68–12) was over quickly as Helenius destroyed Basile in the first minute of the opening round. Helenius connected first with a hard right hook to the body and after that with a right cross to the head sending Basile on the ground. Basile tried to continue but Helenius went right back at him and pummeled the Argentinian on the canvas. Time was 0:48.

EBU-EU super middleweight title bout between Mariano Hilario (16–5) and Niklas Räsänen (13–1) ended in a shocker. Räsänen dominated the action from the sixth round onward and was on the verge of a knockout victory until the champion scored a perfect timed counter punch knocking Räsänen on the canvas.

The fight was even early on. Southpaw-stanced Räsänen got in some good left crosses to the body and head in the opening round. In the second Hilario took the center of the ring with Räsänen trying to lure the champion into a trap. Hilario was strong in the fourth until Räsänen wobbled the champion in the final seconds of the round.

Räsänen kept scoring the flashier shots, and finally in the beginning of the tenth Hilario went down from a right hook to the head. Räsänen began to pick Hilario apart, but the bleeding champion was still dangerous. As Räsänen charged in the eleventh Hilario dropped the challenger with a booming right hand shot. Räsänen got up but was unable to continue. The time of stoppage was 1:04.

Dayron Lester (7–0) destroyed Ivan Jakovljevic (1–3–1) in the opening round of the light heavyweight contest. The Serbian tried to throw some hard haymakers early on, but the highly skilled Lester, who came in the ring dressed as Santa Claus, calmly picked him apart and knocked him on the ground with a right hook to the head. Time was 1:22.

Middleweight bout between Dimitri Faltin (2–1) and Ken-Tore Halland (5–0–1) ended in the third as Halland dropped Faltin with a sneaky left hook. Time was 0:20. Faltin got up and wanted to continue, but referee halted the contest. It was an even fight until the stoppage as Faltin scored the hardest shots with his right hand and taller Norwegian jabbed and moved out of the way.

Jesse Jouhki’s (4–1) and Dimitrije Djordjevic’s (0–2) lightweight bout was a tough fight as both tried to hurt the opponent with power shots. Jouhki was the more skilled boxer of the two, but the tough Serbian had lot of guts and was not afraid to exchange hard punches. Jouhki started to take control in the third and in the end all three judges scored the fight for the Finn, but Djordjevic left his mark as Jouhki’s ear was bleeding badly.

Welterweight debutant Oskari Metz gave Marko Nastic (0–2) a sound beating. Metz simply overwhelmed the Serbian with an endless barrage of punches. In the first round Metz hit Nastic with numerous left hooks to the body, and in the second round he switched to right hooks to the head. In the fourth round Nastic was ready to go, but the brave Serbian managed to stay on his feet until the final bell.