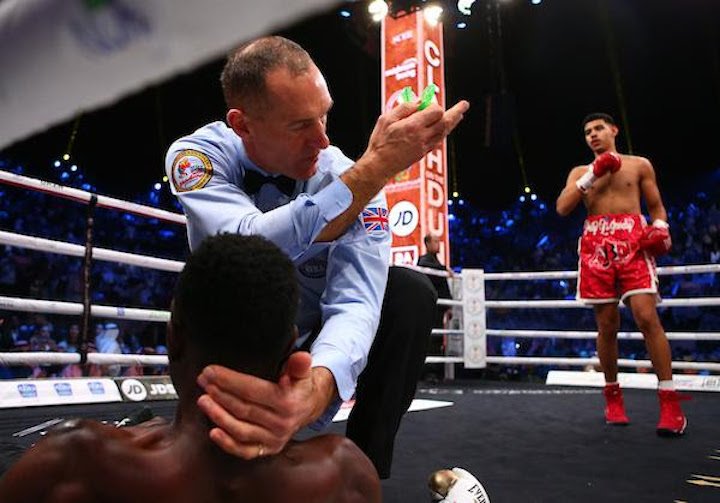 iego Pacheco destroyed Selemani Said in the 1st round of their scheduled four-round super middleweight bout.

Pacheco, who is managed by Split-T Management, dropped Saidi with a vicious combination that consisted of a right to the body, uppercut and a deviating left that sent Saidi down for several minutes.

The fight was halted after just 98 seconds.

With the win, Pacheco won his eighth bout in just under 12-months and with his last several knockouts being “Highlight-Reel” stoppages, the 18 year-old Pacheco will enter 2020 as one of the top super middleweight prospects in the world.

Pacheco is promoted by Matchroom Boxing.

This past Saturday night, Ronald Ellis moved down in weight successfully and won a 10-round majority decision over Immanuwel Aleem in a bout that took place at Barclays Center in Brooklyn, and was streamed live on SHOWTIME Sports®

Ellis boxed well behind a nice jab, and landed the sharper punches throughout the fight. Ellis won on two judges scorecards 98-92, 97-93, while a 3rd judge somehow saw that fight even at 95-95.

With the win, the native of Lynn, Massachusetts raises his mark to 17-1-2.

“It was a good performance for Ronald. The fight was supposed to be his introduction to the middleweight division, but Aleem could not make the weight, and asked for a heavier weight. Ronald was on the card with Chris Eubank Jr. and Jermall Charlo, and we would love to fight either of them. Ronald is not out of the super middleweight business either. If a fight with one of the champions or top contenders becomes available, we would gladly take those opportunities,” said Vito Mielnicki, the promoter of Ellis, and CEO of GH3 Promotions.

Bocachica got the better of the action in a fight where the fighters stood toe to toe on several occasions, with the 21 year-old Bocachica landing the sharper and harder punches.

Bocachica of Detroit won by scores of 90-72 on all scorecards, which raised his perfect mark to 15-0.