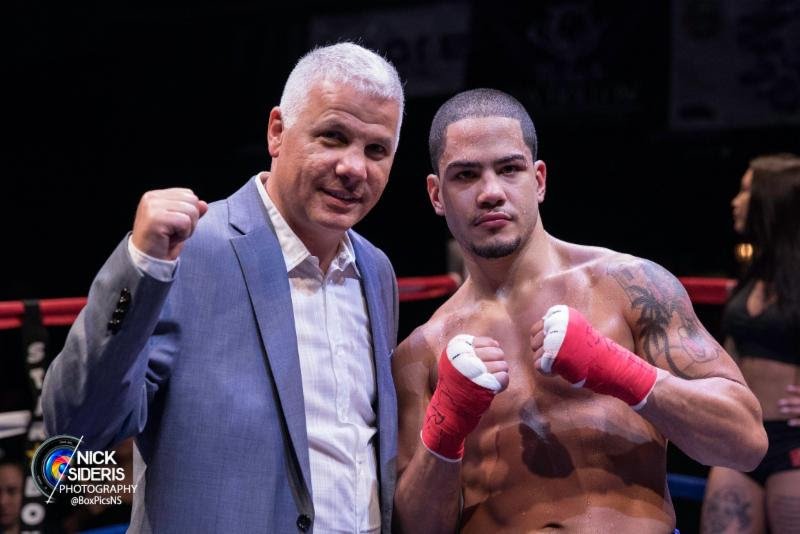 DANNY “EL GALLO” GONZALEZ did not wait long to show his dominance in Friday nights main event against JUSTIN SAVI. The first round saw exchanges from both men, attempting to find their distances. However in the second, Gonzalez took over, landing hard combinations to the body and the head of Savi, at one point so severe the ref stepped in to give a standing count. With only 1 second left in the 2nd round, Gonzalez unloaded on Savi, who he had pinned in the corner, until the ref stopped the bout as Gonzalez earned the TKO victory. Danny Gonzalez improves to 16-1-1 7KO’s.

TYRONE “PRETTY BOY” JAMES put the fans at The Paramount on their feet against, KAESEN FREEMAN. James used his length to find his distance against Freeman, and once he did, there was no looking back. A beautiful counter right dropped Freeman midway through the first, and with blood in the water, James refused to let it get away, viciously dropping Freeman with a straight right hand a second time, causing the referee to call a stop to the action, earning a KO victory. James improves to 8-0 5KO’s.

JOHNNY “THE HITMAN” HERNANDEZ was in grudge match with Haymarket, Virginia native, JUAN de la cruz RODRIGUEZ. It seemed as the fight went on, Hernandez’s combination became more crisp and more damaging. Rodriguez was unafraid to go toe to toe with Hernandez, and many time throughout the fight the two exchanged even blows at the center of the ring. When all was said and done, the judges scored a unanimous decision victory for John Hernandez.

Both MICHAEL STOUTE and ANDREW STRODE entered the ring, on Friday, without a blemish on their record. Both Stoute and Strode went into full tactical warfare, slipping punches, countering, and attempting to command the ring. Both fighters found success in different rounds in a number of ways, including Strode’s quick straight right, and Stoute’s body work. The fight was a true deadlock most of the way through, however, after the final bell, the judges scored majority decision win, in favor of Andrew Strode. Strode improves to 4-0 1KO.

JOHN ARROYO and ANTHONY WOODS opened the night of action with a four round fight that mainly included blood and bombs in which Arroyo was cut over his eye from a head butt, courtesy of Anthony Woods. The back and forth action from both men led to the scores of 38-38 on all three judges cards, a rare unanimous decision draw.

FACTS:
Featured in the main event is Queens native, DANNY “EL GALLO” GONZALEZ who is in search of his eighth consecutive win at The Paramount. See the next generation of New York rising stars such as TYRONE JAMES, MICHAEL STOUTE, JOHNNY HERNANDEZ and JOHN ARROYO.