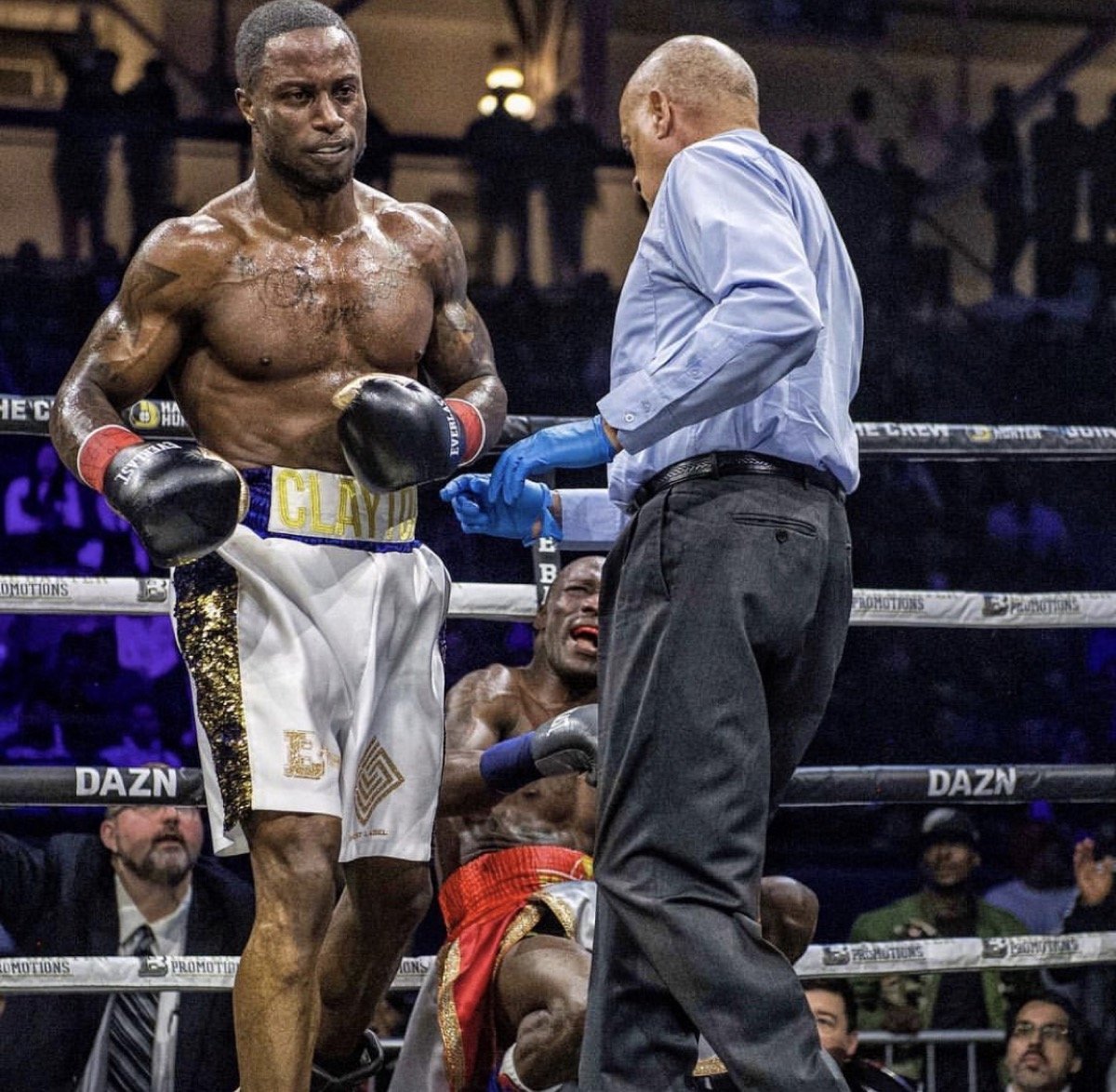 It was a monstrous weekend for the stars of the Lee Baxter Promotions family over the weekend, on both sides of the border.

In Toronto, LBP presented a tremendous night of action downtown at the historic Mattamy Athletic Centre. Not only is the venue located on the same plot of land as Maple Leaf Gardens, but the very date of the event, March 29, fell on the same night as the biggest fight in the city’s history—Muhammad Ali vs. George Chuvalo.

Perhaps Canada’s next superstar, Custio Clayton, kept the hype train chugging along with an impressive stoppage win over former world champion DeMarcus “Chop Chop” Corley in the sixth round of their featured bout. Though Corley gave him some solid frames through rounds 1 through 5, Clayton was clearly in control from start to finish. In the sixth, Clayton forced Corley back into the ropes, where he uncorked a flurry that kept the veteran on the canvas for good. Corley is known as one of boxing’s most durable gatekeepers, and despite being past his best days, a KO win over “Chop Chop” remains notable.

“Whenever you face Chop Chop, you excpect a tough fight, and you expect to go rounds. This is a guy who’s gone the distance with Floyd Mayweather and Zab Judah, and got on the floor nine times against Lucas Matthysse. He’s as tough as they come, and he doesn’t lay down for anybody. This is just more proof that Custio Clayton is everything he’s been hyped up to be,” said Lee Baxter.

In the main event, fan favorite Stanyslav Skorokhod had the Mattamy Centre rocking with a thunderous second round knockout over Jose Luis Zuniga. Skorokhod, and his fellow countryman Oleksandr Teslenko (who was victorious over Fabio Maldonado in a NABA heavyweight title bout the same night) attracted a raucous Ukrainian contingent once again in the Toronto region. It was the third consecutive knockout victory for Skorokhod on Canadian soil.

“From a promoter’s standpoint, you couldn’t ask for anything more. Stan brought out a dedicated fanbase that made for an incredible atmosphere, and he gave them exactly what they wanted—he closed the show,” said Baxter.

On the undercard, Canada’s top middleweight, Patrice Volny, made short work of the previously undefeated Nicolas Holcapfel of Slovakia. Volny demonstrated a vicious body attack, particularly for a lanky puncher like himself, hurting Holcapfel to the body in the second round before finishing him with a punishing left hook downstairs.

“Patrice had a really busy 2018, with lots of tough fights, so it was nice to see him get Holcapfel out of there early. Spending more time in the gym with Custio Clayton and their trainer Eric Belanger can only be beneficial to him. He has a penchant for putting on a show, that X-factor you need to become a star, and that’s what we believe he’s capable of turning into,” said Baxter.

Almost 600 miles away in New Albany, Indiana, welterweight contender Dusty Hernandez Harrison got back to work with a first round knockout over journeyman Bruce Rumbolz. Harrison showed his power fighting above the welterweight limit in this tune-up bout, dropping Rumbolz with the first significant shot he threw, a hard left hook upstairs, which ended the fight at 1:46 of the round.

“The welterweight division is as hot as ever, it’s filled with pay-per-view attractions, and we believe Dusty is dangerous to any of those top names when he’s back in top form,” said Baxter. “With his fanbase in D.C. and his skill level, he very well could be our company’s first world champion.”