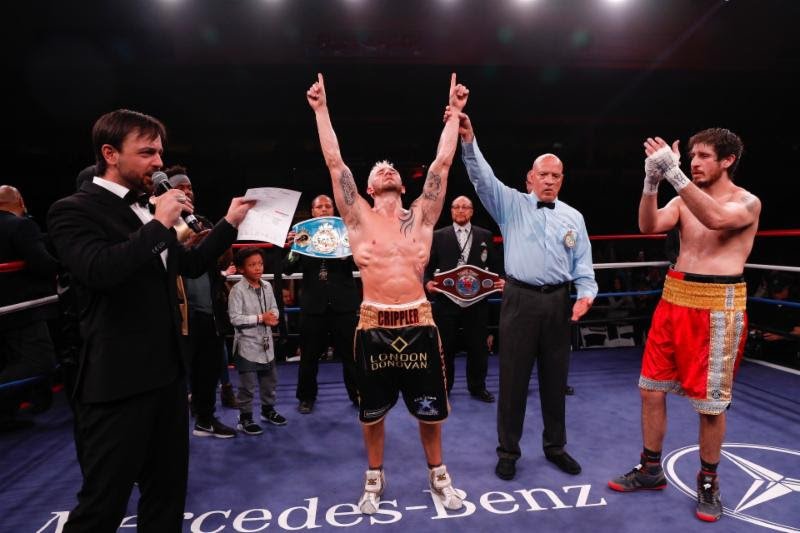 Fighting in front of a huge crowd of well-wishers in the main event of Crowley’s self-promoted “Homecoming IV- Bad Blood” event at the Memorial Centre in Peterborough, Ontario, Canada, Crowley won every minute of every round against the tough, but badly out-matched British Columbian McLellan.

While some held that Crowley was in for his toughest career challenge, he made it clear he is ready for a step up from club-level domestic competition. The 25-year-old hit McLellan at will with southpaw lefts and rights like a cat playing with its food.

Afterward, the two scrappers settled their differences with McLellan even contradicting his main pre-fight assertion by admitting over the house mic that Crowley is a “real fighter.”

The pair of scrappers commenced to landing haymakers on each other from the first bell, with McCue increasingly getting the better as the fight wore on.

Purtel’s chin, however, is made of lead and he fought back bravely until being rescued from his own courage at 2:04 of the second, still on his feet.

Both fighters can be proud of their short, but entertaining shootout.

For the first six rounds of their eight-round super lightweight fight, Hamilton, Ontario’s Steve Wilcox (20-3-1, 5 KOs) appeared to be heading toward a sleep-inducing decision over Aguascalientes, Mexico’s Javier Mercado (25-14-2, 22 KOs).

Using his longer arms to peck away with the occasional jab then retreat back to a safe distance, Wilcox seemed to have found a frustrating, yet winning strategy.

From out of seemingly nowhere, referee Donovan Boucher issued an unwarranted point deduction to Mercado for an invisible series of low blows, which seemed to anger the Mexican and wake him up. He immediately tore into Wilcox with an angry barrage of clubbing shots from both sides, stunning and then dropping the Canadian for two hard knockdowns.

However, with some serious hometown assistance from ref Boucher including slow counts and long, physician-level wellness checks before allowing the action to resume, Wilcox was able to survive the onslaught.

In the final round, Wilcox went back to playing it mostly safe.

Despite the late-fight heroics, on points, Wilcox deserved the unanimous decision he got by scores of 77-73, 76-74 and 77-73. Mercado, however, deserves all the credit for saving this would-be sleep-aid of a fight.

A four-round super lightweight bout was ended early by the hammering fists of Toronto via Makhachkala, Russia’s Arthur Biyarslanov (2-0, 2 KOs), as he stopped Veracruz, Mexico’s Isaac Castan (2-3-1, 1 KO) at 3:00 of round one. Biyarslanov had too much accuracy and power for the over-matched Mexican. Castan was down from a right hook and twice more from the follow-up and wisely elected not to come out for round two.

In a four-round cruiserweight bout, Bowmanville, Ontario’s Abokan Bokpe (9-1, 4 KOs) stayed busier than his Mexico foe, Juan Santiago (6-3-1, 5 KOs) and managed to win a unanimous decision (scores 40-36, 40-36 and 39-37). The much larger Bokpe chose a mostly cautious approach to the wild-swinging Mexican, but did enough body work and counter punching to deserve the nod.

A rousing female super featherweight battle between winless newcomers started out the night, as Tijuana’s Ana Ruth Castro (now 1-1) was too much for Madison Blakely (0-3) from nearby Belleville, Ontario.

The game Blakely had no answer for Castro’s repeated clubbing right hands, and ate enough of them to lose by unanimous, four-round decision (scores 39-37, 39-39 and 40-36). What it lacked in skill, it was made up for by the heart of both women.