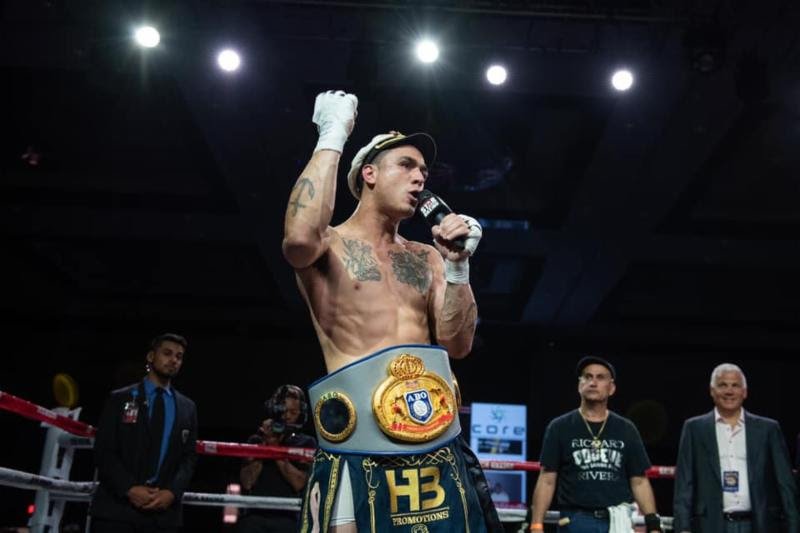 Star Boxing’s Catskills Clash had something for every boxing fan; history, thrilling action, knockouts, upsets and championship worthy fights. While this was the first professional boxing card at newest and closest integrated casino resort to Manhattan (Resorts World Catskills) and the return of boxing to the storied Catskills, it certainly will not be the last. The Catskills long awaited boxing return took over Resorts World Catskills on Friday night, and delivered in every aspect leaving captivated fans electrified.

The Star Boxing Triple Header featured thrilling ABO America Championship bouts that lived up to their hype and Star Boxing’s reputation for putting on thrilling fights. RICHIE “POPEYE THE SAILOR MAN” RIVERA (Hartford, CT now 12-0 10KO’s) brawled with BRIAN “MVP” HOWARD (Philadelphia, PA now 14-3 11KO’s) for the Cruiserweight strap. Fighting behind an enthusiastic crowd cheering his name, the entertaining Rivera was hurt in the first by a thunderous right hand by Howard. However, Rivera would steady himself, wisely fall inside and cut the power of the strong Philadelphian. Rivera systematically chopped down the big and powerful Howard by attacking the body. Rivera turned in a gutsy performance, avoiding the power of Howard for the remainder of the 8-round bout, while scoring mostly to the body. Earning the unanimous decision victory, Rivera becomes a regional champion (ABO America’s Cruiserweight Champion) The scores by the judges were all 79-73.

DYLAN “THE REAL DEAL” MORAN (Waterford, Ireland now 10-1 5KO’s) and DENNIS “BILLABONG” OKOTH (Silver Springs MD, now 3-2-1 2KO) were in the surprise fight of the evening. After starting strong, the previously undefeated and well-regarded Irishmen, Moran, was boxing well, using combinations and avoiding the offense of Okoth. In the third round, Moran was loosening up, gaining more confidence and controlling the action, but one minute into the round, Okoth landed a surprising blast on the temple of Moran, sending him to the canvas for the first time in his boxing career. Rising to his feet, on unsteady legs, Okoth dropped Moran for the second time in the round just seconds later. Moran just couldn’t recuperate from that first shot to the temple and at 2:15 in the third round, another flush right hand sent Moran to canvas in brutal fashion, ending the fight. Okoth earned the ABO America’s Welterweight Title.

In one of the most exciting fights of the year, “ACTION” ANTHONY LAUREANO (Hartford, CT now 11-0 4KO’s) and DIEUMERCI NZAU (Silver Springs, MD now 11-9 8KO’s) were in an all-out brawl that had the crowd on their feet for the entire bout. Known for his all action style, and disciplined body attack, Laureano did not deviate from what he does best. At times, Laureano landed at will, but Nzau miraculously remained on his feet. In the fifth, Laureano trapped Nzau in the corner for what seemed like an eternity, landing an onslaught of punches, but Nzau would survive the round, amazingly firing back. Finally, in the seventh round, Laureano turned it up even more and the relentless punching and suffocating pressure by Laureano stopped the tough Nzau. Laureano earns the ABO America’s Super Lightweight Title.

In a 4-round bout, ROBERT DURAN JR. (Vero Beach, FL now 3-1 2KO’s) and JERMAINE CORLEY (Concord, NC now 2-6 1KO) were both out for blood, sitting on almost every punch from the opening bell. Both men left every ounce of heart, sweat and determination in the ring. At the end of the fourth round, the entire crowd within the Resorts World Epicenter were on their feet and applauding. The judges’ saw the bout in favor of Jermaine Corley by unanimous decision. (39-37 (2x), 40-36).

Star Boxing CEO JOE DEGUARDIA had this to say about boxing’s return to the Catskills, “We knew that we had a great card for boxing’s much needed return to the Catskills at beautiful Resorts World Catskills and Friday night went beyond expectations. Three fantastic ABO Championship bouts, two phenomenal undercard bouts, and a night of boxing that had fans on their feet from the opening bout. Congratulations to Richie Rivera, Anthony Laureano, and Dennis Okoth on their title wins. We hope that this is the first of many thrilling cards in the Catskills, and we cannot wait to be back here.”