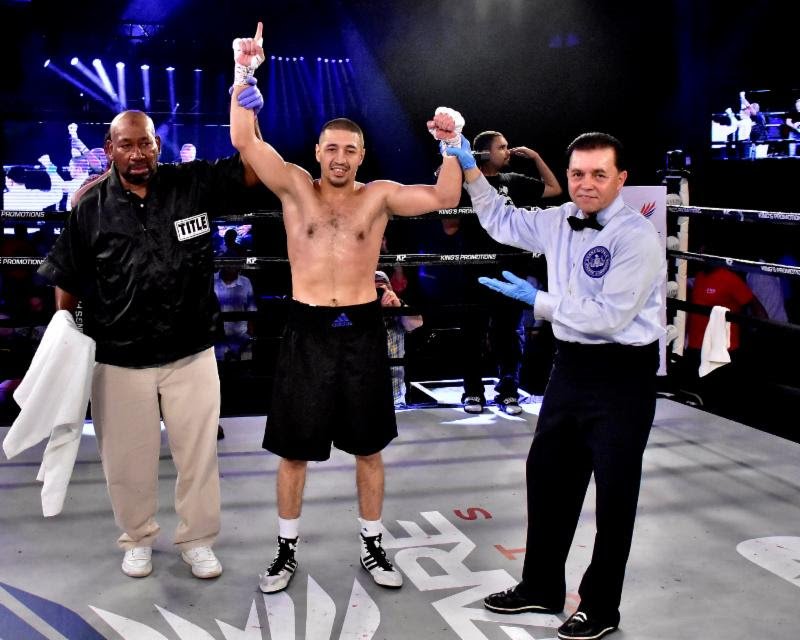 The fight headlined an eight-bout card at The 2300 Arena and was promoted by King’s Promotions in association with Titans Boxing Promotions.

Yunosov dropped Luna with a right hook in round one. That was followed by a flurry of punches that Luna barely survived. It didn’t take long, as in round two, Yunusov landed a perfect straight left that deposited Luna on his back. Yunusov jumped on Luna, and the bout was stopped at 56 seconds.

Yunusov of Philadelphia via Tajakistan is now 8-0 with four knockouts.

Robert Simms scored an upset victory as he handed Colby Madison his 1st loss by pounding out a eight-round unanimous decision in a heavyweight bout.

Madison fought through a badly swollen left eye that occurred in round five. Simms had a bad cut over his right eye, but was able to come through by scores of 80-72 twice and 79-73.

Brown landed a perfect straight left that sent Tidwell down and the bout was stopped at 1:18 of round two.

Brown of Philadelphia is 4-0 with one knockout.

2016 U.S. Olympian Paul Kroll kept his perfect mark in-tact as he scored a memorable 1st round stoppage over Hector Mercado in a scheduled six-round welterweight bout.

Kroll landed a right to the head, that sent Mercado down on his leg. Mercado’s right leg was dangling off of his ankle, and the bout was stopped at 1:23.

Kroll of Philadelphia is 4-0 with four knockouts. Mercado is 3-11.

Hutchinson scored a flash knockdown in the opening frame, and that proved to be distance as he took all cards 57-56.

Hutchinson of Reading, PA is 5-5. Martin of Philadelphia is 4-1.

Torres of Bethlehem, PA dropped Rodriguez in round four, and cruised to the victory by 40-35 scores.

Kevin Asmat stopped Weusi Johnson in round three of their scheduled four round junior lightweight bout.

Asmat dropped Johnson in round’s one and two, and Johnson was stopped on his feet at 2:44 of round three.

Asmat of North Bergen, NJ is 6-2 with five knockouts. Johnson of Wilmington, Delaware is 3-13-1.

Wheeler dropped Hendrix twice and the fight was stopped immedately upon the 2nd knockdown at 2:45.

Wheeler of Bethlehem, PA is 2-0 with two knockouts. Hendrix of Little Rock, Arkansas was making his pro debut.

Undefeated heavyweight prospect, Muhsin Cason (5-0, 3 KOs), who is managed by Greg Hannley of Prince Ranch Boxing, remained unbeaten with a 1st round TKO against Nathaniel Copeland (1-1, 1 KO) of Washington D.C.

Cason, the younger brother of two-time heavyweight world champion Hasim Rahman, landed a vicious body blow in the middle of round one, sending the bigger Copeland to the canvas. Copeland did not recover, and the bout was halted.

“Since I’ve recently moved up to heavyweight, I feel a lot stronger,” said Cason, who is also trained by his older brother Hasim Rahman. “I’m starting to feel more comfortable at heavyweight with each fight. This was my second bout fighting with the big boys and I promise to get better with each fight. My power is moving up with me. I’m hoping to get back in the ring next month.”

“Muhsin showed he has the power to compete at heavyweight,” said manager Greg Hannely. “We are going to try to get three or four more fights in before the end of the year. Right now, the focus is on keeping him busy. He has a bright future and we believe he has all the tools to become a force in the heavyweight division.”

“Muhsin is becoming a better fighter as he marches on in his career,” said Hasim Rahman, who trains Muhsin. “We are working very had in the gym and he’s getting great sparring with some of the best heavyweight in boxing. He’s still learning but he’s retaining all the knowledge I’m showing him. I’m happy we got another knockout against a tough fighter like Copeland.”