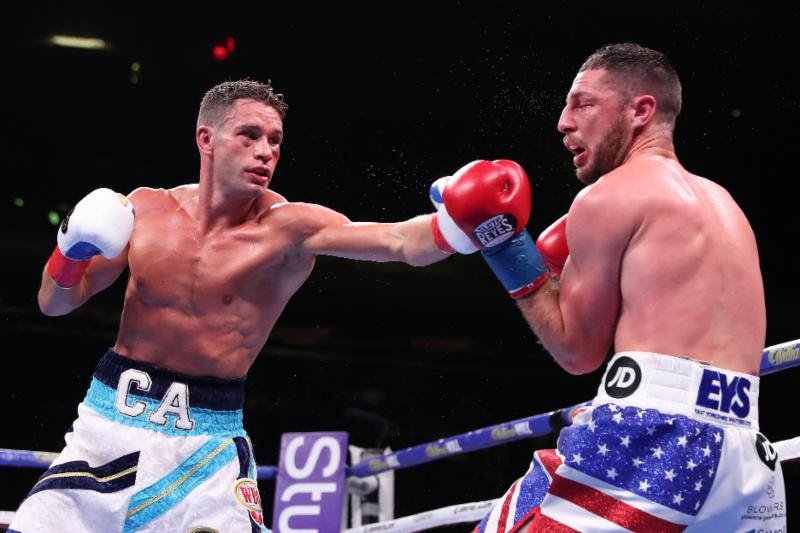 The fight, which was a supporting fight on the Anthony Joshua vs Andy Ruiz Heavyweight Championship Bout, was streamed live on DAZN and lived up to its fullest potential. The large British contingent at Madison Square Garden, could be heard backing their fighter, Coyle, while the hometown New York fans were behind Algieri. Even the promoters could be heard ringside, Joe DeGuardia cheering for Algieri and Eddie Hearn backing Coyle.

Coyle fought well early, appearing to hurt Algieri in the second, however in classic Algieri style, he was able to weather the storm, and later returned the favor. Algieri’s offensive mindset became apparent early, as he began digging accurate body shot, after body shot on Coyle. In the fourth round a beautifully placed body combination sent Coyle to the canvas. To Coyle’s credit, he picked himself off the floor, and continued to fight with pure guts, and will.

Coyle attempted to take back the fight in the sixth round, landing hard shots to the body and head of Algieri, pinning former world champion against the ropes, but it would not be enough. Finding a gap in Coyle’s defense, Algieri continued to batter the former Commonwealth champion. Algieri hurt Coyle in the eighth round and Coyle wasn’t steady walking back to his corner as the bell rang. Coyle’s corner stopped the fight before the start of the ninth saving the tough Brit from further damage. At the time of the stoppage all three judges had Algieri ahead on the cards. (77-74 (2x), and 79-72)

“My whole game plan for this camp was that on June 1, 2019, at Madison Square Garden, I, Chris Algieri, would stop Tommy Coyle,” Algieri said “I have been saying that over and over and over throughout camp. That was the game plan and we knew how to do it. I made it tougher than it needed to be, but I got it done.”

Algieri’s long-time promoter, (Star Boxing CEO) JOE DEGUARDIA had this to say about Algieri’s victory, “Chris’ body work was very impressive and an effective complement to his sharp jab. With those tools and his incredible work ethic and conditioning, he is a dangerous fight for any world champion. I tip my hat to Tommy Coyle, a true warrior and gentleman,” DeGuardia continued, “we will work on a world title shot for Chris, and whether that be Maurice Hooker, or another world champ, Chris is anxious to reclaim the championship of the world.”

With the impressive win over Tommy Coyle, Chris Algieri is poised for that world title shot. Algieri has won three straight fights since his return in November, with his win on Saturday night being the most complete, and impressive victory.